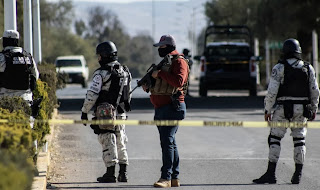 A couple of days ago, the residents of a popular neighborhood in the city of Zacatecas woke up to a scene of terror: a corpse sprayed with bullets and gasoline, on fire, emitting a penetrating smell of burned meat.

That charred body came to be added to the already wide gallery of horror from Zacatecas. In the last week, as Héctor de Mauleón recounted a few days ago in these pages, the state has been the scene of multiple acts of extreme violence: mutilated corpses, loose limbs, bodies without heads and heads without bodies, victims with intimidating messages, victims who are the message. And those signs of barbarism have been found the same in the state capital as in Fresnillo and Guadalupe, the same in urban areas as in the open.

In total, 18 victims of extreme violence in four days.

All this happens a few weeks after the state government announced in a statement the results of the so-called Plan Zacatecas II, a federal program to support the entity. According to this, “Zacatecas is outside the entities with the highest rates of intentional homicides, which fall in Guanajuato, Michoacán, the State of Mexico, Baja California, Jalisco and Sonora.” Well, in absolute terms, the statement is correct. In relative terms, measured as a rate per 100,000 inhabitants, not so much: there Zacatecas is located in first or second place in the table, depending on the month.

The Zacatecas government also highlighted “the apprehension of 57 targets that generated violence” from November 25, 2021 to April 15, 2022. This was called the Zero Impunity Plan. Here it is worth noting the number and the period. Between December 2021 and March 2022, 321 investigation folders were opened in the state of Zacatecas for the crimes of intentional homicide and femicide. As impunity seems a bit far from zero (and that without considering the 1,065 files opened for the same crimes between January and November 2021).

But, in addition, it turns out that many of these people are not accused of homicide: their names appeared in 57 arrest warrants “for the commission of various criminal acts, such as homicide, femicide, family violence, sexual violence, robbery with violence, drug dealing. and kidnapping.”

The statement is deeply revealing: it shows that state authorities continue to try to minimize the size of the problem, persist in using inappropriate metrics, and do not focus on criminal investigations. Homicides in Zacatecas do not stop because no one investigates, prosecutes or punishes the murderers.

And it is hateful to say that it was said, but it was said. Last November, when the support plan for Zacatecas (now known as Plan Zacatecas II) was announced, I wrote the following: “Who, then, is going to have the responsibility to confront the problem that supposedly motivated the plan? Two key actors would have to enter there: 1) the prosecutor’s offices (federal and state), and 2) the state and municipal police. The former were not even present at the event: the words ‘procurement of justice’ did not appear anywhere. And as for the local corporations, the only thing that was offered was support so that, in an undetermined period, “100 percent of the Zacatecas police obtain the Single Police Certificate.” And in terms of criminal investigation, only a commitment was established to “help in the prosecution of priority issues.”

The rest was more Army and more National Guard and more checkpoints and more patrols.