Federal authorities arrested three people Tuesday in connection with a human smuggling incident on San Antonio’s Southwest Side that left 51 migrants dead after a harrowing journey in a sweltering tractor-trailer. It was one of the deadliest such episodes in recent history.

The alleged driver, Homero Zamorano, 45, was arrested after officials say he abandoned the tractor-trailer in a desolate area near Joint Base San Antonio-Lackland and fled the scene. Zamorano has addresses in Houston and the Rio Grande Valley.

“He was very high on meth when he was arrested nearby and had to be taken to the hospital,” a law enforcement officer said.

After arresting Zamorano, authorities traced the semi-truck to a home in the 100 block of Arnold in Bexar County. They put the house under surveillance and saw two men — Juan Francisco D’Luna-Bilbao and Juan Claudio D’Luna-Mendez — leaving in a Ford F150 truck, sources said.

When authorities stopped the truck, one of the men confessed to having a weapon in the vehicle. Officers obtained a search warrant and searched the home on Arnold, where they found more guns, according to court records. The two men were arrested on suspicion of possessing firearms while in the country illegally. They were detained without bail after a brief hearing in federal court. 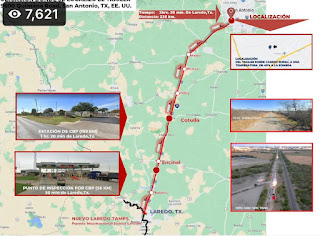 According to two law enforcement officials, the truck traveled from Laredo up Interstate 35 to San Antonio. With Interstate 10 running east to west and Interstate 35 south to north, San Antonio is a major crossroad for human smuggling. Along that route, the truck passed through several border and immigration checkpoints where it was seen on surveillance cameras showing the driver, Homero Zamorano who was captured after the abandoned truck was discovered. The truck’s driver, Homero Zamorano may appear Wednesday in federal court on human smuggling charges. He has a long criminal history. He was high on meth at the time and taken to the hospital for treatment.

The truck may have been carrying around 100 migrants, but the exact number remained unclear, according to local and federal law enforcement officials briefed on the investigation.

It appeared the migrants had recently crossed the border and were picked up by the truck to be taken to where they would work, according to a Mexican official, a U.S. Customs and Border Protection (CBP) official, and another U.S. official, all of whom requested anonymity to discuss the matter.

Craig Larrabee, acting special agent in charge of Homeland Security Investigations in San Antonio, said the death toll from Monday’s human smuggling incident makes it “the worst one we’ve seen in the U.S.”

“The (human smuggling) organizations are getting more violent — they don’t care about the people,” he said. “They don’t think of them as people. They think of them as commodities.”
In other developments, many of the people found inside the truck were covered in steak seasoning, one law enforcement official said Tuesday, likely in an effort to disguise their scent as the smugglers were transporting them.

Timothy Tubbs, who retired as the deputy special agent in charge of Homeland Security Investigations in Laredo, said smugglers commonly use seasonings to aid their smuggling operations.

Law enforcement officials said after being covered in the meat seasoning they were stuffed into a truck’s trailer that had been “cloned” to look like a legitimate truck.

The Volvo truck, a red tractor unit with a large white trailer, was found around 5:50 p.m. Monday after nearby workers heard cries for help and walked over to the tractor-trailer to investigate.

One person was outside the trailer, lying on the ground. The workers opened the doors and discovered dozens of stacked bodies inside, officials said. The semi-truck was first linked to an Alamo man, but an investigation revealed the smugglers had cloned that Texan’s license plate and registration.

‘His DOT Number was illegally copied onto the truck…’ Isaac Limon, whose father-in-law’s vehicle information had been stolen. ‘It was a perfect setup.’ The truck that actually belonged to Limon’s family had been out hauling grain in another part of Texas at the time of the incident.

The truck, which was traced to a trucking company based in the border town of Alamo, TX had actually been cloned, the company owners said. Human smuggling groups and cartels often replicate legitimate vehicles to use in illegal border crossings going so far as to create fake school buses with mannequins standing in as passengers.

“Ours is sitting right here,” Felipe Jr. said by phone. “My truck doesn’t have a window on the side like the one in San Antonio. That one in San Antonio is not our trailer.” He said his father started the business in 2007 and bought the truck in 2020. He said the truck has been hauling grain from Harlingen to Progreso. 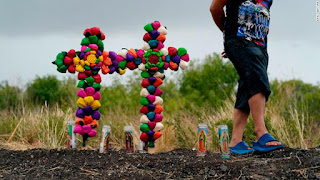 The 51 migrants from Mexico and Central America were found in the abandoned tractor-trailer, which could fit around 100 people. Eleven other people were rescued from the trailer and were hospitalized, including an adolescent boy who was in critical condition at University Hospital.

The dead were 39 men and 12 women. Twenty-two were from Mexico, seven were from Guatemala and two were from Honduras, Mexican Foreign Minister Marcelo Ebrard said. The rest are still being identified.

Bexar County Commissioner Rebeca Clay-Flores, whose South Side precinct includes the area where the truck was found, said a 23-year-old woman from Guatemala being treated at University Hospital was in serious condition, and a teenage boy was there in critical condition.
Clay-Flores said 34 of the bodies have been “potentially identified.” But she said the Bexar County Medical Examiner’s Officer has been stretched thin by the tragedy.

“Because of the high number of victims from last night, we have reached out to neighboring counties for assistance from their medical examiner’s offices also,” Clay-Flores said.

Clay-Flores advised those who feared that a loved one could have been on the tractor-trailer to call the Guatemalan Consulate at 956-800-7351.