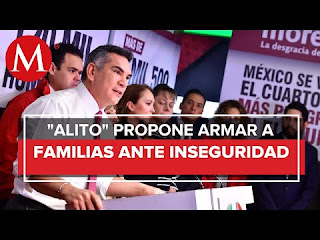 Alejandro Moreno indicated that in the next few days they will present this proposal and others, as soon as they finish analyzing them with experts.

Alejandro Moreno, national leader of the Institutional Revolutionary Party, announced that the PRI will propose a reform to the Federal Weapons Law to make it easier for families to have access to a larger caliber firearm to defend themselves from insecurity in their homes and businesses.

“We are going to propose amending the Firearms Law, so that Mexican families can more easily access larger-caliber weapons so that they can protect their homes, their businesses, and their lives.”

At a press conference, Moreno clarified that they will seek to “modify the regulatory and legal framework of those who can carry a firearm and comply with the protocols”, so that there is real access to carrying a firearm, but he pointed out that it should be ” regulated and based on the law so as not to have a lack of control”.

“It is about that, in the absence of a State, and that there is no State to take care of Mexicans, criminals know that people are going to be able to defend themselves,” he explained.

Moreno announced that the Institutional Revolutionary Party will promote a law so that members of the Armed Forces, the National Guard and the Navy can take their weapons to their homes, to defend themselves and deal with organized crime.

“We know that many soldiers are later kidnapped and killed on their off days. They wait for them, follow them and capture them for doing their job. So we want them to be permanently armed, as is the case in most of the world’s armed forces and police forces. To take care of them and that they can take care of us.”

The federal deputy also argued that in the absence of a State that takes care of Mexicans, “let the criminals know that the people are going to defend themselves.”

In addition, the PRI will propose the training of police forces, invest more resources in security, redesign the Mexico Platform, promote a policy of zero tolerance for organized crime, and enter the digital age and modernization, along with international organizations and cooperation agencies in this matter.

“The Morena government does not have any security plan, nor is it interested in doing so, so the violence that exists in the country is the main concern of Mexicans,” he stressed.

Alejandro Moreno indicated that in the next few days they will present these proposals, as soon as they finish analyzing and detailing them with experts in the field.