By “El Huaso” for Borderland Beat

This morning around 7 a.m., a 16 year old chicken salesman was shot and killed by armed criminals in Chilpancingo Guerrero. This killing is linked to extortion by violent criminal groups in the area.

The victim has been identified as José Eduardo N. He was driving a red Nissan pickup truck on Vicente Guerrero Boulevard of Colonia López Portillo when he was shot and killed. Photos of the event show his body sitting slumped in the drivers seat, struck and killed by gunfire. 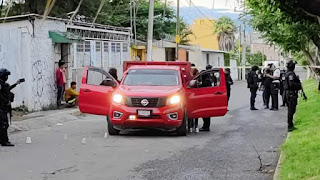 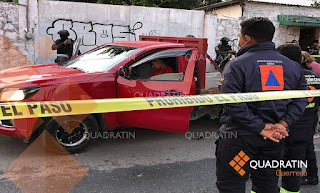 According to Quadratin Guerrero, pistol caliber casings were found at the crime scene. There are no suspects yet.

In July, Milenio reported that the spate of killings of chicken salesmen in Chilpancingo was perpetrated by organized crime groups who extort them. The murders frightened the sellers so much that for days, local market stalls were empty, and people could not purchase chicken.

While the plight of the sellers no longer reaches headlines, criminal groups continue their violent oppression.