“HEARST” and “Huaso” for Borderland Beat 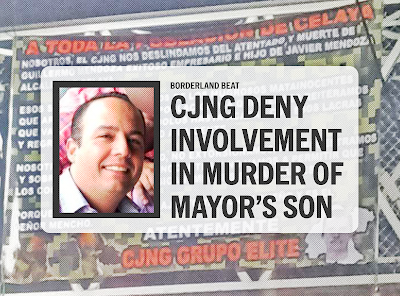 In a new narco banner the CJNG has denied being involved in the recent killing of the Celaya mayor’s son, which happened just a few days ago.

The Banner About the Mayor’s Son

At approximately 9:00 am on August 20, 2022, residents of the city of Celaya, in Guanajuato, awoke to find a number of narco banners had been placed across the city. They all bore the same message and were signed by the Cartel Jalisco Nueva Generation (CJNG) subgroup Grupo Elite. 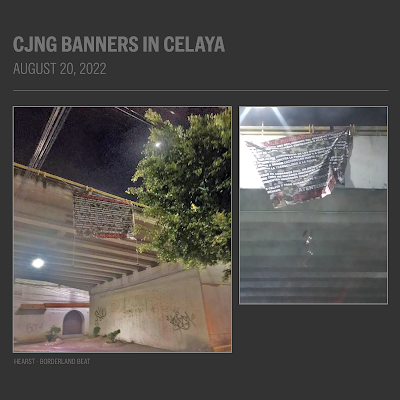 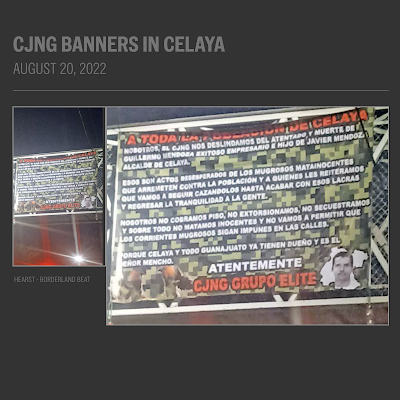 The banner read as follows, as translated by El Huaso:

We, the CJNG, distance ourselves from the attack and death of Guillermo Mendoza, successful businessman and son of Javier Mendoza, mayor of Celaya.

These are the desperate acts of those filthy people who kill innocents and who continue threatening the population, and who we will continue hunting down until the scumbags are finished and return tranquility to the people.

We don’t charge ‘piso’, we don’t extort, we don’t kidnap, and above all we don’t kill innocent people and we won’t let these filthy commoners continue acting with impunity in the streets.

Because Celaya and all of Guanajuato already have an owner, and it is Señor Mencho.

The message is referring to the August 17, 2022, assassination of the Celaya mayor’s son, named Guillermo Mendoza, who was shot to death while he was sitting in his parked car by a group of unknown armed men. For more details on the killing of the mayor’s son, please see this previous story  here. 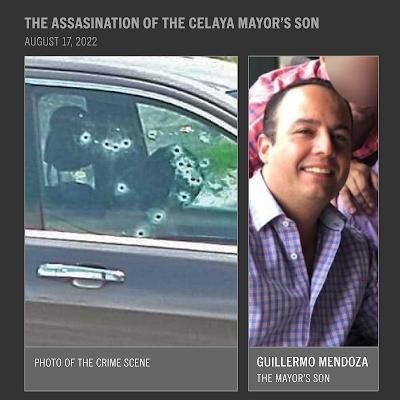 El RR is reported to be the leader of the CJNG subgroup Grupo Elite, which has a strong presence in the state of Guanajuato. When news of his possible arrest broke, a large number of narco blockades were erected by CJNG members within Guanajuato as retaliation against law enforcement. It was later reported that RR managed to get away and was not arrested.

With this context in mind, some online questioned whether the CJNG was behind the killing of the mayor’s son as it happened shortly after. This banner appears to be the group’s response to said suspicions.

Linguistic and Design Aspects to The Banner 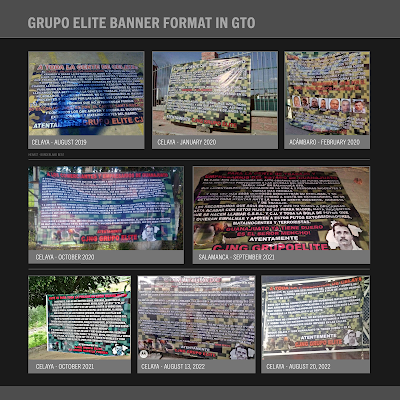 It is interesting to note that, as discussed by Borderland Beat contributor Huaso in previous articles, for the last two years, CJNG’s Grupo Elite has been using the same background, decorative graphics, and text style for all of their banners in Guanajuato. That being said, Grupo Elite signs, such those left with human remains, do not adhere to this format. 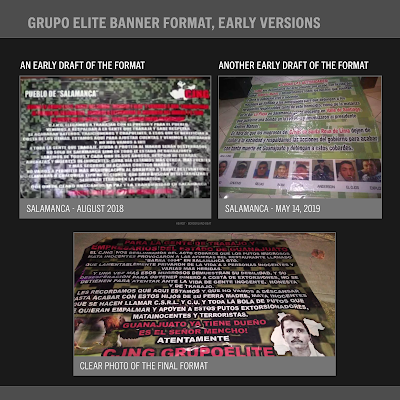 It appears that this style was developed as a kind of “letterhead”, if you will, for announcements made via banner. Grupo Elite may be doing this in order to denote authenticity and deter the creation of fake banners that rivals might sign as CJNG in order to misdirect law enforcement or heat up the plaza.