The arrests stem from six indictments, one of which alleges a racketeering scheme and includes allegations of narcotics and weapons trafficking and the extortion of local businesses. “This case is the culmination of years of work by our agents and prosecutors, alongside our local law enforcement partners, to remove violent gang members from our streets and dismantle the criminal organizations that fuel violent crime,” said Attorney General Merrick B. Garland of the Justice Department. “The Justice Department has no tolerance for violent gangs that sow fear and terror in our communities, and we will continue to use every tool we have to stop them and bring them to justice.”

“The indictments unsealed today charge a gang accused of plaguing South Los Angeles for 50 years through repeated acts of violence, drug trafficking, extortion of local businesses, and weapons violations,” said Acting United States Attorney Stephanie S. Christensen for the Central District of California. “Today’s coordinated law enforcement action targeted the Playboys street gang because of its alleged widespread criminal conduct, as well as the fear and intimidation its members imposed on our community.” Those arrested today are among 41 members and associates of the gang named across the six indictments. Three of the defendants were already in custody, and law enforcement continues to search for 10 defendants.

One of the indictments alleges that the gang is a criminal enterprise under the Racketeer Influenced and Corrupt Organizations (RICO) Act. This indictment outlines the structure of the gang, its allegiance to the Mexican Mafia prison gang also known as La eMe, and how it generates revenue through, among other things, the sale of narcotics and firearms.
The Playboys 13 was originally a car club called, “Southern Califas Latin Playboys Car Club.” Cliques from the West Side moved to Burbank, California in the 1980s and have spread out to North Hollywood and other cities in the San Fernando Valley. Eastside Playboys started in 1975 on 49th street in Los Angeles, California and the Southside Playboys started in 1982 in Bell Gardens and South Gate, California. In the beginning, they were all Hispanic, but in recent years, even though it is rare, other ethnic groups have been able to gain membership making them multiethnic. However, the Playboys remain predominantly Hispanic in all their cliques from Latin America to the United States.

“Members and associates of this gang have built a criminal enterprise by trafficking in guns and deadly drugs, by extorting business owners, and by terrorizing victims with violent assaults and robberies,” said Acting Assistant Director in Charge Amir Ehsaei of the FBI’s Los Angeles Field Office. “The FBI will continue to work with our local partners to identify the gangs wreaking havoc on our communities and to use federal tools to hold major offenders accountable for their crimes.”

Seizures of Narcotics, Cash and Guns

During this investigation, the Los Angeles Metropolitan Task Force on Violent Gangs seized from the Playboys and their associates approximately 47 firearms, 199 kilograms of methamphetamine, 13.6 kilograms of fentanyl, 27 kilograms of cocaine, 7.6 kilograms of heroin, 283 kilograms of marijuana, and $140,000 in cash. The RICO indictment further alleges that members of the racketeering enterprise operated two unlicensed marijuana dispensaries.

The lead defendant in the RICO indictment is Eliseo Luna, 47, of South Los Angeles, who acted as the overall “shot caller” for the gang, according to the indictment. Luna – who used a number of monikers, including “Chilo,” “Crazy,” “Toca” and “El Abogado” – allegedly oversaw the Playboys’ drug trafficking activities, gave orders to Playboys’ general leadership and membership, and authorized the assault and murder of members in bad standing with Playboys.

The 110-page RICO indictment alleges that four of the defendants participated in a March 2020 home invasion robbery of a marijuana dealer at a residence in Woodland Hills. In a subsequent conversation with Luna outlined in the indictment, one of the alleged robbers described the home invasion robbery, including the restraint of the victim, the theft of up to $50,000 in cash and approximately 10 pounds of marijuana, and a gunfight between the robbers and the victim, which resulted in one of the robbers being shot in the stomach by the robbery victim.

The RICO indictment outlines numerous conversations about criminal acts and specifically alleges that several gang members possessed approximately 3.3 kilograms of heroin at one point. One defendant also allegedly participated in the attempted murder of a Playboys member who was stabbed in the head and torso multiple times for betraying the gang.

A second indictment unsealed today names 17 defendants, all of whom are charged with participating in a narcotics-trafficking conspiracy. One of the defendants – Elvis Arreguin, 31, of San Pedro – allegedly maintained a laboratory in Long Beach where fentanyl and methamphetamine were processed.

“On July 7, 2021, defendant Arreguin and a co-conspirator drove together to a UPS store in Long Beach, California, where the co-conspirator dropped off a package containing approximately 10.007 kilograms of fentanyl that were packaged in one-kilogram bundles and covered in mustard,” the indictment alleges.

Another indictment charges four defendants with participating in a scheme to distribute methamphetamine, heroin, cocaine, and fentanyl. The lead defendant in this case, Francisco Soria, 29, of South Los Angeles, an alleged member of a Latino street gang in Watts with close ties to the Playboys, is charged with possessing with the intent to distribute approximately 12 ounces of fentanyl, 20 ounces of heroin, and more than an ounce of methamphetamine. Soria also allegedly possessed two firearms – one of which was a 9mm “ghost gun” – in furtherance of drug trafficking. 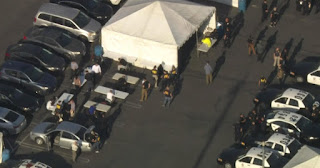 “I am proud of the hard work and dedication of our LAPD officers, the FBI, and the Los Angeles Metropolitan Task Force on Violent Gangs on such a demanding investigation,” said Los Angeles Police Department Chief Michael Moore. “Organized street gangs prey upon our communities with violence, intimidation, and fear. Their tradecraft is furthered by the trafficking of dangerous firearms and narcotics. As in this case, and others, with strong federal partners and the support of our communities we are able to remove the distributors and root cause of such violence from our neighborhoods.”

The RICO conspiracy and Hobbs Act robbery charges each carry a statutory maximum sentence of 20 years in federal prison. The narcotics and firearms offenses carry a range of potential sentences, including a mandatory minimum sentence of at least five years in prison. The defendants arrested today are expected to be arraigned this afternoon in U.S. District Court in downtown Los Angeles.

Today’s arrests are the result of an investigation that was opened approximately four years ago by the FBI and the multi-agency Los Angeles Metropolitan Task Force on Violent Gangs. The investigation, dubbed Operation Down the Rabbit Hole, utilized an array of tactics, including wiretaps and surveillance, to uncover evidence of extortion of businesses, violent robberies, burglaries, narcotics, and firearms trafficking, and violence against their own members as “discipline” for violating gang rules and norms.