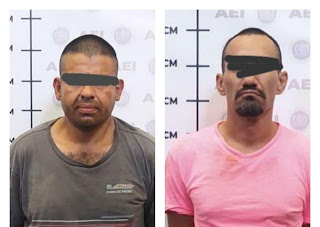 In addition, they are related to an assault on a seafood business called “Sammy” and a robbery in which they stole a safe containing almost a million pesos.
Elements of the State Investigation Agency (AEI) assigned to the Poniente Vehicle Theft area, dismantled a gang of car thieves known as “Los Chorizos”, which is also related to several robberies with violence, in Mexicali.
The most recent crime was reported around 9 a.m. on August 10, in a house located on Jesús García Avenue and H Street, in the Libertad neighborhood, where the gang of assailants broke into a house marked with the number 1638, and without fanfare they beat a young man, and later snatched the keys of two 2002 Ford Windstar gray cars, with Anapromex plates; and a black 2013 Toyota Sienna minivan.
With the data collected at the scene, an investigation was started with which they obtained some data from the area of ​​operations, for which they set up a search operation in the West Zone of the city until they located on Lázaro Cárdenas Boulevard, in the surroundings of the Viñas del Sol subdivision, a Toyota Sienna vehicle, which coincided with the characteristics of the unit stolen days ago.
Elements of the AEI collated some data and confirmed that the unit had a report of theft, so they decided to intervene.
It was then that they identified the names Manuel Alejandro and Miguel Ángel, who were already recognized as car thieves in the area and alleged members of the gang of car thieves known as “Los Chorizos”.
Inside the unit -in addition- they located the property title of the Ford Windstar unit, which was stolen days ago in the same robbery, and which was found hours later in the Coloso neighborhood, completely burned.
After corroborating their data, elements of the FGE confirmed that both individuals are allegedly involved in the armed robbery of a seafood business called Sammy, but also in the robbery of a safe that occurred in the El Paraíso neighborhood, on March 20. May.
According to preliminary information, the criminals broke into a home located on Villa Fátima Avenue, where there were two minors aged 12 and 17, whom they threatened and locked in the bathroom, and then stole the safe that contained 700 thousand pesos, 10 thousand dollars, as well as a 55-inch television and two Mirage refrigerators.
The alleged assailants now face three charges that will be announced in a hearing in the coming days.
Zeta Tijuana