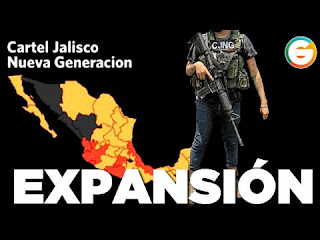 The Jalisco New Generation Cartel continues its criminal expansion not only in Mexico, since in recent years it has expanded its activities to other Latin American countries. This is according to a report from the United States Congressional Investigations Service that indicates that the organization led by Nemesio Oseguera Cervantes aka El Mencho has a presence in 28 of the 32 states in the Mexican Republic.

And it only needs to reach Sinaloa, Sonora, Durango, and Tlaxcala to finalize its expansion. The report indicates that it has extensive domain and power in the states of Jalisco, Guerrero, State of Mexico, Veracruz, Colima, and Nayarit.

Likewise, the report indicates that the Jalisco New Generation Cartel has made alliances with other cartels in five of the six border states with the United States. Baja California, Chihuahua, Coahuila, Nuevo León, and Tamaulipas. In addition to the fact that Mexican officials and police officers are on the cartel’s payroll and have avoided taking action against its members.

The US Congress in particular is concerned about the use of drones to drop bombs and anti-personnel mines. Methods of destruction that the cartel has used in Michoacán where they have waged a bloody war against Los Viagras, United Cartels, and other criminal groups.

And despite leadership losses, the Jalisco New Generation Cartel has expanded its geographic reach and maintained its own issue while exploiting infighting between factions of the Sinaloa Cartel, the US Congress report notes.

Finally, the report highlights that the DEA considers the Jalisco New Generation Cartel a maximum threat to the United States and the best armed criminal group in Mexico.