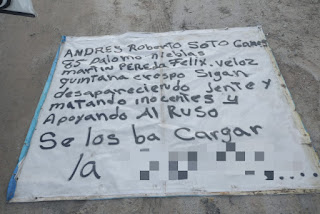 It was discovered by employees of a Gas Silza branch in the east of the city. In it, police chiefs are warned to stop disappearing people and to stop protecting “El Ruso”.
A threatening banner allegedly dedicated to a group of police officers in the East Zone of Mexicali, was discovered by employees of a branch of a gas dispenser, during the morning of Thursday, September 22, in the capital of Baja California.
It was around 6 a.m. when the emergency call was made by employees of Gas Silza, whose branch is located on Fourth Street, in the Gonzalez Ortega neighborhood.
Upon arrival they interviewed the complainants, who indicated that when they arrived at their work station they noticed that there was a white tarp with black letters, where a threat was written.
The person who made the discovery removed the tarp to avoid generating more noise, but informed his supervisor, who was in charge of issuing the emergency call that mobilized the authorities.
The message that had the banner is replicated below:
“Andres Roberto Soto Games 85, Palomo Nieblas Martin Pereda, and Felix Veloz Quintana Crespo. Continue disappearing and killing innocent civilians. As well as supporting El Ruso and your worlds will go to shit.”
The message has no signature, it is only a direct threat to those who – presumably – are commanders of the municipal corporation of Mexicali.
The banner was collected by elements of the Municipal Police and later turned over to the Public Prosecutor’s Office, which will be in charge of carrying out the investigations.
Zeta Tijuana