Is B3W Washington’s answer to China’s One Belt, One Road or a rebranding exercise for US-funded interference and the blocking of development abroad?

June 23, 2021 (Brian Berletic – NEO) – Announced at the archaic “Group of 7” summit (G7) in mid-June – the “Build Back Better World” (B3W) initiative is billed by Western governments and the Western corporate media as a plan that “could rival” China’s One Belt, One Road initiative (OBOR).

Yet even its announcement – surely the easiest phase of the overall initiative – fell flat. Not a single actual example was provided of what B3W would provide prospective partners beyond the vaguest platitudes and most ambiguous commitments.

A “fact sheet” provided by the White House for what is essentially a US-led project  – rather than clarify or solidify B3W’s vision – instead seems to suggest the “initiative” is serving as a rebranding exercise behind which US meddling abroad will continue.

The White House document mentions, “Development Finance Corporation, USAID, EXIM, the Millennium Challenge Corporation, and the U.S. Trade and Development Agency,” as being involved – all of which are admittedly arms of US political interference abroad, not agencies involved in driving actual development.

In many instances, “counterinsurgency” strategies are employed by the US for precisely this purpose – cementing in power a client regime selected by the US to replace a targeted government toppled by Washington. USAID’s role is augmenting the insurgency-counterinsurgency strategy, not actually spurring development in any given country.

Other pillars of B3W like the “Millennium Challenge Corporation” qualify development through influencing policymaking.

One project on the Millennium Challenge Corporation’s official website featured in a post titled, “Social Inclusion in MCC’s Mongolia Compact: Affordable Water for all in Ulaanbaatar,” illustrates that US-funded “development” in Mongolia regarding “affordable water for all” is not building physical infrastructure that actually brings affordable water for all – but instead consists of conducting surveys and pressuring policymakers. 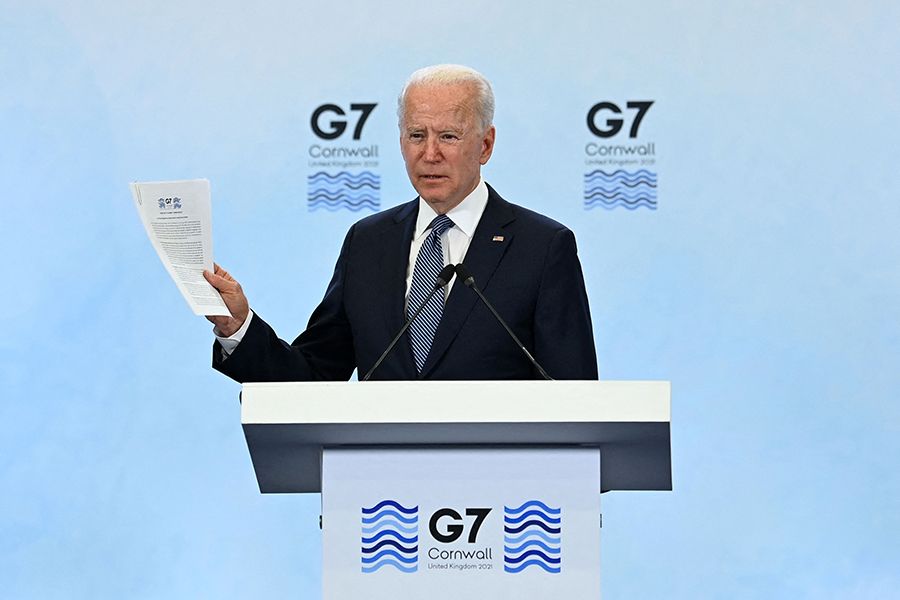 Myanmar: A “Sneak Peak” at America’s B3W in Action

Instead of actual development, US “development” agencies like these often channel money into political opposition groups specifically to block the construction of national infrastructure that would solve issues like energy, water, and food shortages – often predicated on false socio-political pretexts like “human rights” and “environmental” concerns.

In Myanmar for example, US government-funded opposition groups have worked for years to block the construction of Chinese-led projects including dams that would generate electricity, contribute to flood control, and aid in agricultural irrigation.

Wikileaks in a 2010 US diplomatic cable titled, “Burma: Grassroots Opposition to Chinese-backed Dam in Northern Burma,” would reveal US diplomats discussing the success of US embassy-funded “grassroots” opposition groups blocking Chinese-initiated dams. The cable noted:


An unusual aspect of this case is the role grassroots organizations have played in opposing the dam, which speaks to the growing strength of civil society groups in Kachin State, including recipients of Embassy small grants.

Once projects like dams, roads, rails, or ports are blocked in targeted nations like Myanmar, no Western alternative is ever offered.

Instead, organizations like USAID provide provisional infrastructure like solar panels and ad-hoc water towers providing recipient communities with minimum living standards. The goal is to disrupt unifying national projects and encourage local communities to make do without modern infrastructure. This in itself aids in arresting development across entire regions – allowing the US to artificially maintain “primacy” over them. This also contributes to separatism, with communities dependent on US handouts rather than working with their own nation’s government  – which in Myanmar in particular has been the source of decades of armed conflict. This conflict also further arrests development.

All of this is in stark contrast to China’s OBOR which is building physical infrastructure that is transporting goods and people across entire regions and providing food, energy, and water for a growing number of people around the globe – all without political strings attached or armies of foreign-funded “activists” commandeering national policymaking and in turn, hijacking national sovereignty.

Nations have already tangibly benefited from Chinese-led infrastructure projects – including nations like Myanmar where projects have been completed. These include roads, bridges, and dams.

The Irrawaddy Bridge (also known as the Yadanabon Bridge) built by China CAMC Engineering and completed in 2008 – for example – finally allows heavy vehicles to cross the Irrawaddy River from the nation’s northwest to Mandalay and the nation’s interior beyond without using cumbersome ferries.

Also built with China’s help is the Yeywa Dam commissioned in 2010. It includes the nation’s largest hydroelectric power plant, providing energy to nearby Mandalay. It also significantly contributes to flood control.

Opposed to its construction was the so-called “Burma Rivers Network” – an extension of “International Rivers” – funded by Western corporate foundations like Open Society, the Ford Foundation, and the Sigrid Rausing Trust – all admittedly working in parallel with fronts like USAID and the National Endowment for Democracy to advance US government foreign policy objectives.

Burma Rivers Network made claims regarding the dam including that the power would “likely” be “transmitted to China” – a claim that was and is completely false. The network also made baseless claims that villagers were “forcibly relocated without compensation” and that the dam would jeopardize their livelihood. This livelihood included unsustainable fishing and logging along the river – a livelihood necessitated by a previous lack of infrastructure needed for modern and sustainable economic opportunities.

As other adjacent projects to the Yeywa Dam are either proposed or in the process of being built – these same US-backed networks work tirelessly to derail compensation, relocation, and even public hearings to discuss either in the first place.

In some cases – like the proposed and partially constructed Myitsone Dam – work has been halted by not only US-funded opposition groups politically obstructing progress, but also by armed attacks by US-backed separatist groups.

The Guardian in a 2014 article titled, “Burmese villagers exiled from ancestral home as fate of dam remains unclear,” would admit:

As work got underway, the Kachin Independence Army broke a 17-year-old ceasefire to attack the dam site. In 2010, 10 bombs exploded around the dam site, killing a Chinese worker.

Kachin separatism is openly encouraged by the US as revealed through a series of leaked cables and the US government’s funding of Kachin separatist groups listed on the National Endowment for Democracy’s official website.

While the example of US interference in Myanmar and its open determination to arrest development is an extreme one – it is essentially the same process used around the globe to address – as the White House “fact sheet” regarding B3W calls it, “competition with China.”

It is also a “sneak peak” at what B3W will actually entail. Were it a genuine infrastructure drive – actual projects would have been showcased upon its inauguration. Instead, hand-waving and platitudes were used as stand-ins where real infrastructure projects should have been – an assurance that the US was merely rebranding its ongoing efforts to derail not just Chinese-led development worldwide – but development itself.

For a declining empire to maintain “primacy” over areas of the planet as the US insists it must do regarding the Indo-Pacific region – the only way to remain on top is to make sure everyone is declining at an equal or greater rate than the US – even if it means Washington knocking these nations down itself.