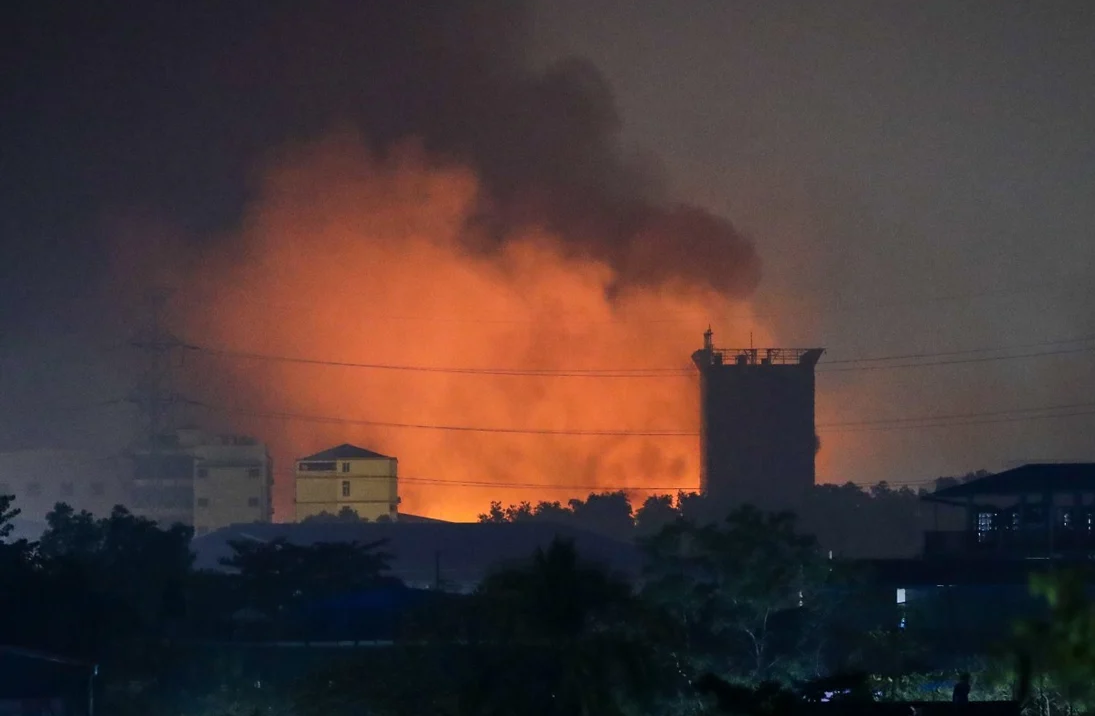 It is a conflict where US-backed armed opposition groups (previously depicted by the Western media as “peaceful” “pro-democracy” activists) are fighting Myanmar’s central government, police and military for control of the country.

The conflict clearly threatens both existing Chinese investments and the future of further investment and development projects. The resulting violence benefits neither China nor Myanmar, but most certainly benefits China’s chief rival, the United States.

In February of this year Myanmar’s military ousted the government of Aung San Suu Kyi and her National League for Democracy (NLD) political party. While the West depicts this as a coup against a democratically elected government, Aung San Suu Kyi and her NLD were created by and for Western special interests with virtually every aspect of the party funded and supported by US and British government money and with Suu Kyi herself maintaining a entourage of foreign advisors.

The purpose of installing a US client regime in power in Myanmar was part of a much wider long-standing effort to encircle and contain China. Myanmar shares a border with China and counts China as its largest and most important trade partner. For Beijing, Myanmar is a crucial partner in extending its Belt and Road Initiative (BRI) with pipelines, ports, and roads all aready in use or under construction.

With the US client regime ousted from power, a secondary objective of burning the nation to the ground, thus blocking China’s BRI and leaving a failed state on China’s border to contend with has taken precedence.

Armed ethnic groups, originally part of the British Empire’s colonial army in then Burma, armed and trained by both the US and UK during World War 2 and ever since maintained to destabilise Myanmar since achieving independence from Britain in 1948, have stepped up hostilities against Myanmar’s current government, police and military.

These ethnic groups are also allegedly providing arms and training to “pro-democracy activists” who have since transformed into what are being called “people’s defence forces” (PDF).

PDF militants are not only attacking military positions but are also carrying out a campaign of terrorism, attacking schools, electricity offices and court buildings, according to even opposition media outlets like US government-funded Myanmar Now.

With this all in mind, SCMP’s article, “As the West leaves a void in Myanmar, China ignores its own advice to invest,” ultimately reveals US ambitions in fanning the flames of armed conflict in Myanmar are designed to block Chinese investments, cripple Myanmar’s economy and ultimately derail indefinitely China’s BRI ambitions in the country.

The article cites associates from the United States Institute of Peace, the Wilson Centre and the Stimson Centre, each either directly tied to the US government, or funded by Western corporate-financier interests including arms manufacturers, energy giants, banks and industrial conglomerates.

Their collective narrative is one where China risks investing in a destabilised nation with escalating violence, a narrative well suited for Washington and is encirclement/containment policy toward China.

Little treatment or insight is given to who is fuelling this violence. Weapons do not spring from the ground nor grow on trees. They are manufactured and shipped to the battlefield.

With many militants sporting what are clearly US-manufactured M-16 assault rifles and Eastern Bloc weapons, questions about how they ended up in Myanamr’s jungles and on the streets of its towns and cities remain unasked by the Western media.

The US has been revealed to have shipped weapons around the globe to support militancy elsewhere (most notably in Syria). There, Eastern Bloc weapons were procured by the US Central Intelligence Agency and then airlifted to militants operating along and within Syria’s borders.

The New York Times in an article titled, “Arms Airlift to Syria Rebels Expands, With Aid From C.I.A.,” noted:

From offices at secret locations, American intelligence officers have helped the Arab governments shop for weapons, including a large procurement from Croatia, and have vetted rebel commanders and groups to determine who should receive the weapons as they arrive, according to American officials speaking on the condition of anonymity.

There are also US-linked groups operating inside Myanmar’s borders including the “Free Burma Rangers” led by former US special operations soldier David Eubank. US diplomatic cables published by Wikileaks reveal that David Eubank and his “Free Burma Rangers” are in regular contact with the US Embassy in Myanmar as well as the US Consulate in neighbouring Chiang Mai, Thailand.

The “Free Burma Rangers” openly provide military training and non-lethal logistical support to ethnic armed groups across Myanmar, according to Small Wars Journal. Videos freely available online show Westerners participating in armed patrols inside of Myanmar suggesting that weapons are also being brought in through these supposed “aid” groups. The participation of “Free Burma Rangers” in Iraq and Syria makes it even clearer that it serves as a front working adjacent to or fully within US foreign policy objectives.

Since February, many of these US-backed armed ethnic groups have taken what was a low-intensity conflict with the central government to a campaign of armed terrorism including within Myanmar’s urban centres.

Myanmar Now has daily headlines of murders carried out by PDF militants against local administrators as well as civilians “suspected” of collaborating with the government.

Local resistance fighters have claimed responsibility for the killing of a man accused of helping the military carry out its deadly assault against a protest stronghold in Bago in April.

Shortly before the assassination, the Bago branch of the People’s Defense Force (PDF) also set off bombs at the Hantharwaddy Township administration office and the township electricity office in Nyaung Wine.

Western “human rights” groups used to politically undermine Myanmar’s current government and military have at the same time been deafeningly silent over the campaign of concerted terrorism used by US-backed opposition groups in their attempt at paralysing Myanmar on a local level.

This violence will make control over the country difficult and in turn, make it difficult to implement joint projects with China or even protect existing Chinese-built infrastructure and investments.

While China is depicted by the West as a growing threat to global peace and stability, it was China that was building bridges connecting the divided people of Myanmar together and building dams to power cities like Mandalay, driving development, opening markets and creating opportunities.

Washington’s contribution to the region will be deliberately rendering Myanmar a failed state at the heart of Asia, presenting a security threat to its neighbours and a blackhole where once there were economic opportunities and the promise of development.

The SCMP article would note the quandary Washington was presenting Beijing:

Arguing that the situation was now at a crossroads, [Jason] Tower from the US Institute Peace said Beijing could either work with the international community to find a political solution or move forward with economic corridor projects in the face of increasingly militarised opposition.

When we realise “political solution” equates to reinstalling the US-backed client regime to power and continuing a policy of pivoting toward Western “liberalisation” and the replacement of real development with IMF and World Bank predatory capital, and that the “increasingly militarised opposition” is a product of a US proxy war with both Myanmar’s government and ultimately Chinese interests in the region, we then fully realise this is the US demanding it gets its way with Myanmar, or there will be no Myanmar.