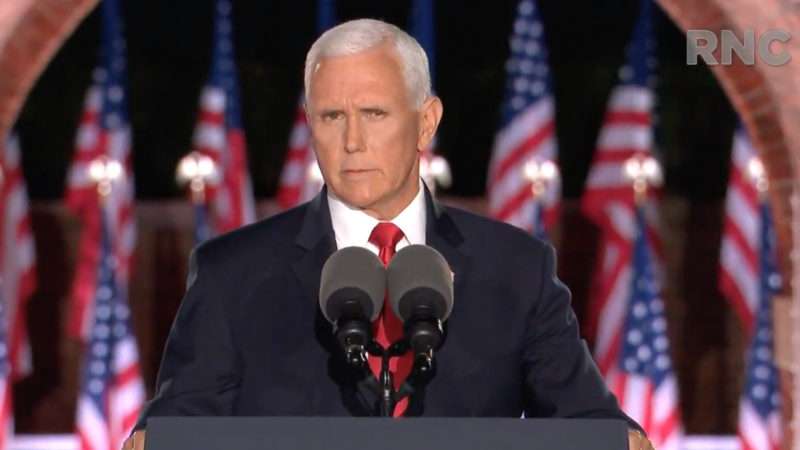 On the third night of the 2020 Republican National Convention, Vice President Mike Pence suggested the key to conquering COVID-19 was believing in miracles. “Last week, Joe Biden said ‘no miracle is coming,’” Pence said last night. “What Joe doesn’t seem to understand is that America is a nation of miracles and we’re on track to have the world’s first safe, effective coronavirus vaccine by the end of this year.”

Breaking somewhat from the previous two nights, the third evening of the 2020 Republican National Convention (RNC) was a good old-fashioned ode to American conservative hopes and fears. The night’s theme was “Land of Heroes,” and Republicans did a moderately good job of sketching out what that means to them—or, at least, what they want people to think it means to them—in a way that shaped up to a positive vision for America, not merely a litany of liberal sins and Biden bashing. Neither of those things was in short supply, however. And on both the positive and negative fronts, none of it bore much resemblance to reality.

There are plenty of good things to criticize about former Joe Biden, Sen. Kamala Harris (D-Calif.), and the Democratic Party’s 2020 ticket choices, just as there’s never been a shortage of legit faults in the Trump administration. But just as many Democrats aren’t content to point out President Donald Trump’s real flaws—preferring fantasies about him being a Putin stooge and a secret Nazi—the Republican convention has chosen to go full conspiracy-mongering, portraying Biden (Biden! The most milquetoast man on the Democratic debate stage throughout the primary season!) as some sort of radical commie who wants to let gang members defile the suburbs, to cancel your church, to abort your newborns, and to start making Marxism and Mandarin mandatory in U.S. schools.

“You won’t be safe in Joe Biden’s America,” Pence told Americans. “Joe Biden has been a cheerleader for communist China… Joe Biden is for open borders; sanctuary cities; and free lawyers and healthcare for illegal immigrants…Joe Biden would set America on a path of socialism and decline.”

Pence’s speech—and Wednesday’s RNC overall—was also brimming with wild tales about Trump, though less in the wide-eyed way of newly-minted cult converts we saw during previous nights and more like the kind of standard, shallow hagiography common in American politics.

Speakers mostly played the hits, bringing up abortion, crime, and more military spending. And Pence’s speech to close the night could have been given in 2008, minus the disdain for free markets and free trade.

Pence praised Trump’s work on ridding the world of “radical Islamic terrorists,” appointing “more than 200 conservative judges to our federal courts,” backing Israel, and supporting “the right to life and all our God-given liberties including the second amendment right to keep and bear arms.” It was boilerplate conservative talking points all the way down, followed by the now-standard line that Trump’s America was a shining city on a hill until COVID-19 hit.

New paper: What is the evidence for physical distancing in covid-19?https://t.co/xDii1yRqkR

Upshot: The 6-foot rule comes to us from 1897. The reality is that ideal distance depends on masks, occupancy, indoor vs. outdoor, silence vs. speaking vs. shouting, and ventilation. pic.twitter.com/QdgoLyoewk

American businesses in China fear Trump’s app ban. A ban on the messaging app WeChat—as ordered by Trump earlier this month in a crackdown on parent company Tencent—could be bad for American citizens and companies in China. A poll of members of the American Chamber of Commerce in Shanghai found 88 percent “expect a negative impact on operations if WeChat cannot be used for communication,” with 56 percent anticipating a “loss of competitiveness” and more than 40 percent saying it would negatively affect their revenue.

“If WeChat has or is doing anything illegal in the U.S., then take appropriate action in that jurisdiction but do not ban American citizens from choosing to use the application,” said one survey respondent.

“The app is the predominant messaging and social media platform in mainland China, with functions ranging from voice messages to mini-apps for online shopping,” and “WeChat Pay is the primary mobile payments rival to Alibaba’s Alipay,” notes CNBC.

Hillsborough State attorney Andrew Warren has announced that new DNA evidence has exonerated a man who has been incarcerated since 1983 for a Tampa murder. @TB_Times

• The U.S. Food and Drug Administration granted approval to an at-home test for COVID-19 that can be taken in 15 minutes and will only cost $5.

• Not letting students use a bathroom that matches their gender identity is a violation of Title IX—the federal law preventing sex discrimination in schools—according to a new ruling from the U.S. Court of Appeals for the 4th Circuit.

• A 17-year-old was arrested as a suspect in the fatal shootings that took place during protests and riots in Kenosha, Wisconsin, on Tuesday. He was charged with intentional homicide.

• “An online sting operation to catch child predators snared hundreds of men. What were they really guilty of?” The New York Times takes a look at how U.S. law enforcement creates “child sex predators.”

• An Republican convention video that purported to show riots of the sort we could expect in “Biden’s America” featured footage from Spain.

• Zoning reform is not leftism.