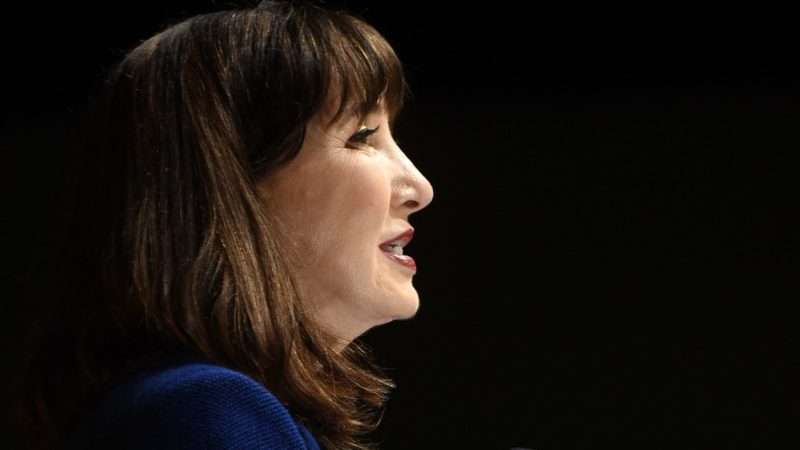 It’s Thursday in Nashville. Libertarian presidential nominee Jo Jorgensen has parked her blue campaign bus in Centennial Park for her “Real Change For Real People” tour. There are tables with masks and hand sanitizer. Supporters gather early, their excitement seemingly unaffected by the pandemic precautions. A few cars slow down to observe the gathering in the park. After a mic check, Jorgensen is introduced and begins to speak.

Almost immediately, her speech covers the two most pressing topics of the summer: criminal justice reform and the COVID-19 pandemic.

“We need change, and I’m glad [the protests] are getting the attention,” Jorgensen tells me on the bus after the speech.

Jorgensen says that the Libertarian Party agrees with the national Black Lives Matter organization on several issues, such as the drug war, no-knock raids, and qualified immunity.

“But their answer is more government,” she says, and “big government is what got us here to begin with.”

Jorgensen mentions a meeting she had with a Black Lives Matter activist in Tulsa, Oklahoma. (The activist was not affiliated with the official Black Lives Matter organization.) They discussed the government’s role in discrimination, with Jorgensen pointing out that the buses in the famous Montgomery Bus Boycott were publicly run and that segregation laws were enforced even though black residents made up the majority of the ridership. “Now imagine today, if Uber decided to discriminate against the majority of their customers. What if they treated their best customers that way? They would go out of business,” she argued. Jorgensen says the activist told her that the experience was “opening his eyes.”

“Libertarians have been talking about these issues for 40 years,” she says. “I think we should support the protesters, but, at the same time, get rid of the opportunistic people hijacking the movement.” Jorgensen points to the people who have used the protests to loot and commit violence: “They are going around basically inserting themselves into peaceful protest. And I’ve seen many clips of the protesters saying, ‘Stop it. Go away. You’re not helping us. We don’t want you here.’”

When the demonstrations first began in May, black organizers and protesters across the nation desperately attempted to keep the violence in check. In one video, D.C. protesters hand-deliver a young man to nearby police after seeing him destroy a sidewalk. In her firsthand account of the Nashville protests, author Nancy French tweeted a video of a black protester arguing with white protesters over property destruction.

“We need to do what we can to keep the protests on target,” Jorgensen adds.

The conversation then shifts to the COVID-19 pandemic.

“We’re all adults, and it shouldn’t be against the law to be stupid,” Jorgensen says.

Jorgensen notes that with personal freedom comes responsibility. While she doesn’t support mask mandates (“unless we’re talking about a government building”) or even a forced vaccine in the event that one is developed, Jorgensen sees private companies enacting mask policies as a sign that most Americans are taking the pandemic seriously.

“That just shows what libertarians have been saying for decades, which is just because the government doesn’t tell you to do it doesn’t mean it won’t get done,” she says. “We still have entities who are requiring us to wear masks. We don’t have to wait until the government tells us to. But this way, we have choice.”

Jorgensen adds that private companies wouldn’t enact mask policies if they thought doing so would harm their profits: “I don’t think they’d be requiring a mask if they thought that people would stop shopping in their store and they’d go out of business. So ultimately this is coming from the individual.”

What does Jorgensen think the executive branch should be doing in the pandemic? “I think the president has the obligation to lead the country and to get information out there to warn people,” she says. She is upset at President Donald Trump for saying, “If you don’t have [COVID-19] symptoms…don’t get the test.” Given the disease’s asymptomatic spread and long incubation period, she says, this was irresponsible advice.

Jorgensen also notes the variety of ways the Food and Drug Administration (FDA) and other federal agencies have restricted access to mass testing. Such testing, she notes, contributed greatly to South Korea’s flattening of the outbreak curve.

Our conversation concludes with a question about the current debate over voting by mail.

“It’s fine with me if we have mail-in votes,” she says. “As long as we do it through FedEx.”