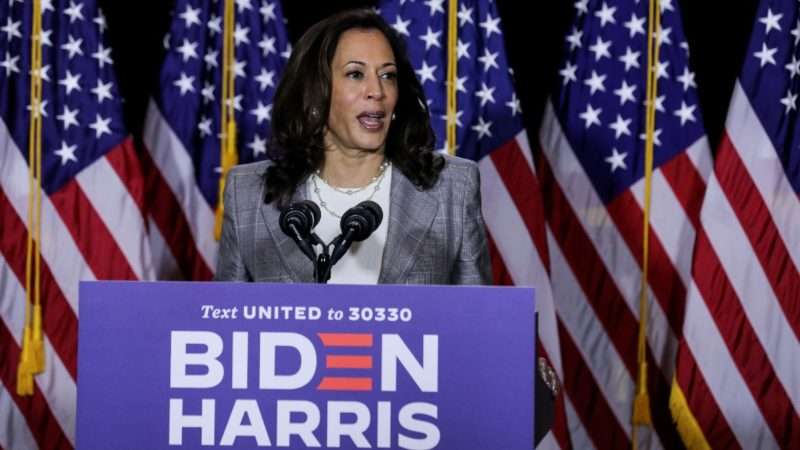 When presumptive Democratic vice presidential nominee Kamala Harris was running for president, she appeared at CNN’s Equality Town Hall, an October event focused on the LGBTQ community. How, one questioner asked, will Harris communicate her “liberal, Californian perspective when reaching out to voters in small, conservative areas?”

Harris said she’d tell the story of a day in 2004 where she arrived at San Francisco’s City Hall to find families of same-sex couples lined up around the block to witness their loved ones’ weddings. “It was a day where people who loved each other had the ability for their love to be recognized by law,” said Harris, who herself officiated gay weddings years before they were legalized statewide in California. “And if anyone has known love, and honors the importance of love and the commitment one person is willing to make to another person in the name of love,” she continued, “they should always recognize and encourage that nobody would be treated differently under the law.”

It’s an evocative story about why gay marriage should be allowed, but it doesn’t address the chief concern you’ll hear from religious conservatives these days: Whether they’ll be compelled to participate in and pay for things, particularly in the workplace, which their creeds and consciences forbid. Unfortunately, this wasn’t a momentary lapse: Harris shows little interest in reaching common ground with voters worried about religious liberty. She even seems unwilling to acknowledge the possibility that their fears could be based in something more substantive than a failure to have “known love.”

The Supreme Court’s June decision on Bostock v. Clayton County is a useful synecdoche for LGBTQ policies. Bostock controversially expanded employment discrimination protections to include sexual orientation and gender identity. Though a subsequent ruling enhanced the “ministerial exception,” which gives religious institutions far wider latitude in hiring and firing, Bostock was considered catastrophic by many religious conservatives who want to bring their beliefs into business contexts that aren’t explicitly religious. At least arguably, the court has protected religious institutions but not individuals. Harris cheered Bostock, which accomplished a major goal of her 2017 and 2019 legislation to weaken the Religious Freedom Restoration Act.

The birth control fight, similarly, turns on whether the state can force employers to pay for birth control they consider abortifacient if doing so violates their religious beliefs. Harris says employers must be made to pay. In 2014, as California’s attorney general, she filed an amicus brief in the Hobby Lobby case that presented a stunningly narrow view of free religious exercise. She described it as “personal, relating only to individual believers and to a limited class of associations comprising or representing them.” The Constitution “protect[s] the development and expression of an ‘inner sanctum’ of personal religious faith,” Harris wrote, but not “the exercise of such inherently personal rights by ordinary, for-profit business corporations.”

This is a bizarre vision of faith confined to mental assent and perhaps a few private ceremonies. It is unrecognizable and nigh useless from many religious perspectives, for most religious people believe our faith should inform all parts of our lives, including our work. In that case, protecting only an “inner sanctum” is no protection at all.

Then there’s abortion. Harris is pro-choice, of course, but her stance goes well beyond ensuring abortion is legal and accessible. She’s a vocal proponent of federal funding for abortion. In California, she championed legislation forcing pro-life pregnancy centers to advertise free or cheap abortion options to their clients. (The law was later struck down as a First Amendment violation.) Critics and supporters alike have said Harris’ bill to weaken the Religious Freedom Restoration Act could be used to require Catholic health care providers, for example, to perform abortions.

Perhaps the single most revealing comment Harris has made on abortion came in 2018, when the U.S. Senate was considering the nomination of Brian Buescher for a district judgeship. “Since 1993,” she said, “you have been a member of the Knights of Columbus, an all-male society comprised primarily of Catholic men. In 2016, Carl Anderson, leader of the Knights of Columbus, described abortion as ‘a legal regime that has resulted in more than 40 million deaths.’ Mr. Anderson went on to say that ‘abortion is the killing of the innocent on a massive scale.’ Were you aware that the Knights of Columbus opposed a woman’s right to choose when you joined the organization?”

This is what has conservative Catholics denouncing Harris as an anti-Catholic bigot. To be Catholic, they say she’s implying, is to be an extremist unsuitable for the federal bench. That’s a plausible reading, though it’s complicated somewhat by her willingness to run alongside Joe Biden—but then, Biden isn’t exactly the same sort of Catholic. The assumptions undergirding Harris’ comment suggest she doesn’t think people whose religion places them on the opposite side of the culture war merit much protection in public life.

Finally, there’s Harris’ gleefully expressed willingness to override constitutional rights by executive order. At a primary debate in September, she sneered at the “idea that we would wait for this Congress that has just done nothing” to issue a federal assault weapons ban, breaking with Biden on the constitutionality of such a move.

Biden’s view may hold sway for the next four years. But it’s not hard to imagine a President Harris in 2025, freed of Biden’s lingering constitutional constraints, deciding that executive orders could be used on First Amendment matters as well as Second. Whatever lip service Harris pays to Americans’ freedom to worship, it’s a freedom she clearly wants neatly confined to our own heads.