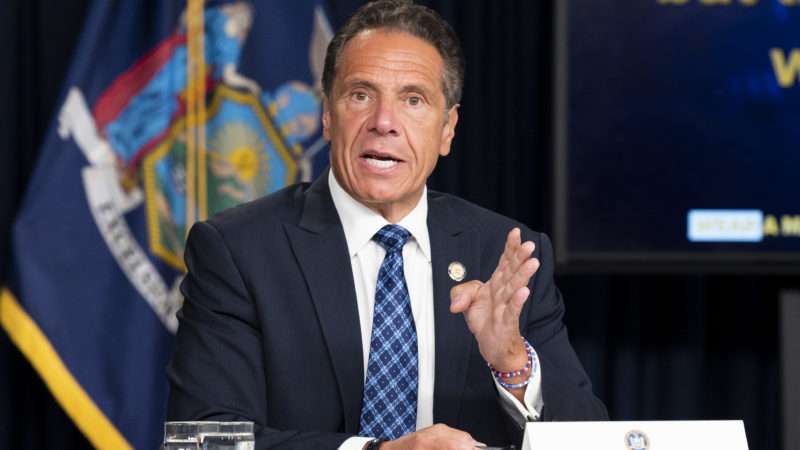 New York Gov. Andrew Cuomo (D) said on a press call today that he would not allow indoor dining to return in New York City unless local politicians devoted significant police resources to enforcing social distancing and other reopening conditions.

“Our rules and guidance on reopening is only as good as the compliance and the enforcement,” Cuomo said, adding that state resources have already been stretched thin attempting to enforce limits on the serving of alcohol by outdoor restaurants in the city. “If we open restaurants that’s going to complicate by the hundreds if not thousands the number of establishments that have to be monitored.”

Restaurants are allowed to open for outdoor dining in New York City, but can only serve alcohol to seated patrons who’ve also ordered a meal, per a July executive order from Cuomo.

“It’s time to allow indoor dining in New York City with reduced capacity and clear guidance to ensure social distancing and safety,” Johnson said yesterday. “Summer is winding down, and they need to begin planning for the colder months.”

Restaurants in the rest of New York state have been allowed to reopen their dining rooms at 50 percent capacity provided they maintain six feet of distance between parties and following other physical distancing guidelines. Earlier this week, one New York City restaurant filed a $2 billion class-action lawsuit against state and local officials over their continued ban on indoor dining.

“We’re going to contact the Speaker today and say if New York City can say this many police, NYPD, can be put on a task force to monitor the compliance, that is something we can discuss,” Cuomo said during his press call today, suggesting that 4,000 officers would be needed to police indoor dining establishments.

“The Speaker is talking to the Governor about how we can help bring indoor dining to the five boroughs,” a council spokesperson told Reason. Johnson agrees with the need for compliance but wants other city agencies—not NYPD—to be involved with enforcement.

The mayor remained non-committal about when indoor dining might return, saying, “It has to be health and safety first. It has to be, how do we defeat coronavirus? That’s the first consideration.” De Blasio previously said that he would make a decision this month on when restaurants could reopen their dining rooms. Cuomo has stressed that allowing indoor dining is his decision to make.

New York City’s Hospitality Alliance, which represents restaurants, has been demanding the return of indoor dining for weeks now.

“The city exceeds and sustains the metrics that have allowed restaurants throughout the rest of the State to reopen,” said Hospitality Alliance executive direction Andrew Rigie in an August press conference. “Our industry’s survival over the next several months depends on government immediately developing and implementing a plan that allows restaurants in New York City to safely reopen indoors.”