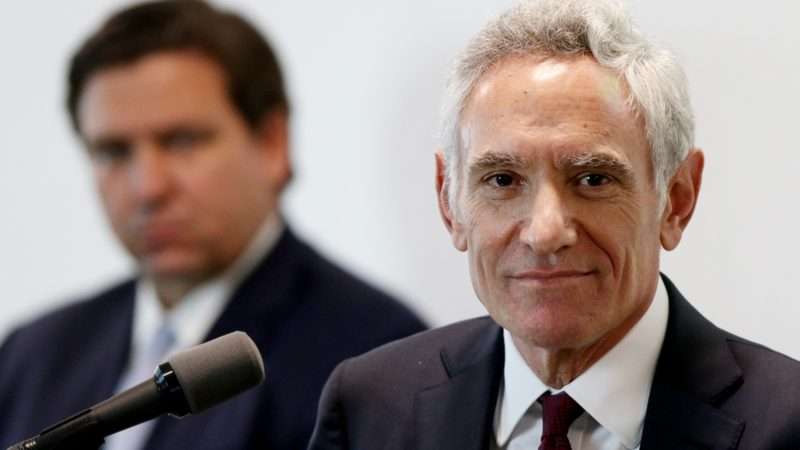 Scott Atlas, the physican and Hoover Institution fellow who is now advising President Donald Trump on COVID-19, thinks Sweden’s approach to the disease, which has been notably less restrictive than the policies of other European countries, is “relatively rational” and “has been inappropriately criticized.” By contrast, The New York Times, which is worried about Atlas’ influence on the president, says Sweden’s policy has been “disastrous” and “calamitous.” That judgment seems premature if the goal is minimizing total COVID-19 deaths over the long term at an acceptable cost.

While Sweden avoided a general lockdown, the government did ban large public gatherings, close high schools and universities, and recommend physical distancing in bars and restaurants. It urged people to work at home if feasible and avoid unnecessary travel or social events “attracting many people at the same time.” It advised people older than 70 to stay at home as much as possible. As Atlas sees it, Sweden “did appropriate social distancing guidelines, very important, instead of decrees and confinement….What they said was these are the guidelines. We’re not gonna do a total lockdown. We believe you understand the seriousness of this.”

How did that work out? Sweden’s overall COVID-19 numbers look pretty bad. According to Worldometer’s tallies, Sweden so far has seen 576 COVID-19 deaths per 1 million people, which is much higher than the rates in three neighboring countries that imposed more sweeping restrictions on social and economic activity: Denmark (108), Finland (61), and Norway (49). Yet several other European countries have fared worse than Sweden despite lockdowns, including Belgium (853), Italy (587), Spain (623), and the U.K. (611). And in the United States, where all but a few governors imposed broad lockdowns last spring, per capita COVID-19 deaths (570 per million) are about the same as in Sweden.

One can always argue that lockdowns would have been more effective in those countries if only they had been imposed earlier or lifted later and more cautiously, or that things would have been even worse without those restrictions. But on the face of it, countries such as Spain, the U.K., and the U.S. inflicted a lot of economic and social pain on their citizens without any obvious payoff in terms of fewer deaths.

By comparison, Sweden’s Nordic neighbors saw new cases peak in early April (Denmark and Finland) or late May (Norway). Daily deaths peaked in late March (Norway), early April (Denmark), or late April (Finland). All three countries imposed broad restrictions in mid-March, so these trends are consistent with the hypothesis that lockdowns reduce virus transmission and deaths, at least in the short term.

In the United States, new cases peaked in late July, about two months after states began lifting their lockdowns, and have since fallen by 39 percent. Daily deaths are down 59 percent from their peak on April 21. By these measures, Sweden has been more successful at reducing cases and deaths, notwithstanding the government’s decision to eschew a broad lockdown—although Sweden, like the United States, initially did a poor job of protecting nursing home residents from COVID-19.

As Ron Bailey notes, Sweden’s sharp reductions in cases and deaths may be at least partly attributable to herd immunity, which was never an official goal but may have been a byproduct of the government’s less restrictive approach. The same policies that left Swedes more opportunities to mingle, leading to more cases in the spring, may have made the population less vulnerable to infection in the summer. Although antibody studies suggest that Sweden is not close to reaching an infection rate of 60 percent, which many epidemiologists think is the minimum threshold for herd immunity, those tests and those estimates could be misleading if prior infection by other coronaviruses confers some level of resistance through T-cell memory, as some research suggests, and if the people who are especially vulnerable to COVID-19 were disproportionately likely to be infected early in the epidemic.

All of this is “very speculative,” as Bailey notes. But people who think natural herd immunity, combined with precautions aimed at protecting high-risk groups, is the best way to minimize the pandemic’s impact argue that such an approach trades more fatalities in the short run for fewer fatalities in the long run, ultimately resulting in a lower death toll. Scott Atlas seems receptive to that idea, which is the main reason the Times views him as a dangerous influence on White House policy.

“It doesn’t really matter how many [COVID-19] cases” we have, Atlas said on Fox News in July, when newly identified infections were surging, primarily among younger, healthier people. “It only matters who gets the cases, because we know the infection fatality rate for people under 70 is 0.04 percent….The cases themselves should not be and were never the focus. It’s only the tragic consequences of the cases.”

Atlas added that “when you have a lot of low-risk people get the infection, that’s how you generate population immunity.” He also suggested that antibody studies provide a misleading picture of how close any particular place is to that goal, given the role of “T-cell immunity,” which is not detected by those tests.

Atlas argues that the aim should be “stopping the deaths by protecting the high-risk people” and “preventing hospital overcrowding while you safely reopen society.” But he insists that, contrary to what The Washington Post reported this week, he is not pushing the Trump administration to favor herd immunity over general restrictions aimed at reducing virus transmission.

However you feel about lockdowns, advocates of a herd immunity strategy make a point that needs to be considered in weighing their costs and benefits. To the extent that lockdowns limit interactions and reduce virus transmission, they leave a population more vulnerable to infection than it otherwise would have been. Barring the unexpectedly early deployment of effective vaccines, lockdowns may change the timing of deaths without reducing the total. Since it is not feasible to maintain lockdowns indefinitely, that strategy may lay the ground for additional waves of cases and deaths. If Sweden manages to avoid that outcome, its approach may not look so calamitous after all.