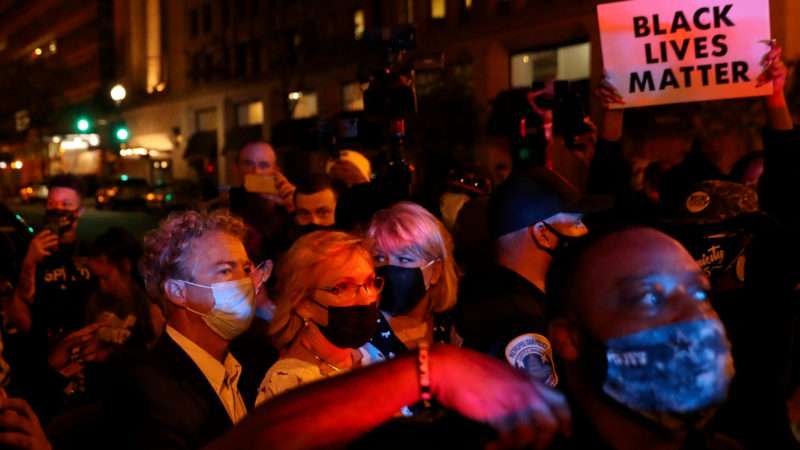 Last week, following President Donald Trump’s Republican National Convention acceptance speech at the White House, protesters surrounded Sen. Rand Paul (R–Ky.) and his wife on the streets of Washington, D.C. Video footage showed that the encounter grew tense, and the Pauls say they had to rely on the police to prevent the crowd from assaulting them.

These protesters deserve condemnation. It was wrong of them to make the Pauls fear for their physical safety. (They were also tactically confused: Why shout “say her name” at the senator who introduced a bill named after the “her” in question?) If the activists committed any crimes, they should be held accountable.

But some critics of these activists—including Paul himself—want the government to investigate the purported funding sources of the protests. As Paul explained in an op-ed for Fox News:

After we got back to our hotel room and some safety we heard something frightening. The “protesters” were staying on our floor—including the room next door to us. They were talking about their mob activities and even saying they thought we were here on this floor. We had to develop a 3 a.m. plan with the Capitol Police to get to safety.

My question is: Who are these people? Who paid for their hotel rooms? Who flew them in? Law enforcement needs to look at the funding of violent criminal activity like this.

And national Democrats need to confront it. It’s organized. It’s paid for. It’s violent. It’s not about Black lives or any lives; it’s about anarchy and destruction. The American people are starting to catch on and grow tired of it.

The Justice Department needs to open an investigation into who is funding these violent riots.

This is misguided, for several reasons.

First, the notion that the violent protests cropping up in U.S. cities are funded by a secret, shadowy cabal is a myth. Conspiracy theorists on all sides of the political spectrum like to imagine that their enemies are financed by some secret puppetmaster but, in general, people who show up to protests are usually not paid actors. People engaged in militant, far-left activism may travel from city to city, and they may be loosely connected with other activists in a semi-organized fashion, but they probably aren’t sitting on some secret pile of money.

Second, a mandate to monitor and investigate protest groups would give the federal government frightening license to target not just dangerous activists but also mere political opponents of the administration. Open-ended investigations into alleged funding sources—absent any evidence of larger financial crimes—strikes me as exactly the kind of witch hunt that many Republican critics of the deep state purport to oppose when the target is either Trump or a pro-Trump figure. If specific activists are arrested for violence, looting, or rioting, it may be appropriate—on a case by case basis—for law enforcement to ask questions about their specific circumstances. But any open-ended probe would pose a serious concern on civil libertarians grounds.

The frustrating reality is that much of the wanton property destruction following anti-police protests in cities like Kenosha, Wisconsin, and Minneapolis is opportunistic and only vaguely ideological. When public order breaks down, some subset of the population will rob stores, smash windows, and set buildings on fire. Others flock to protest in hot zones because they like the fight. These are the maladjusted, not paid foot soldiers in some wealthy villain’s war.