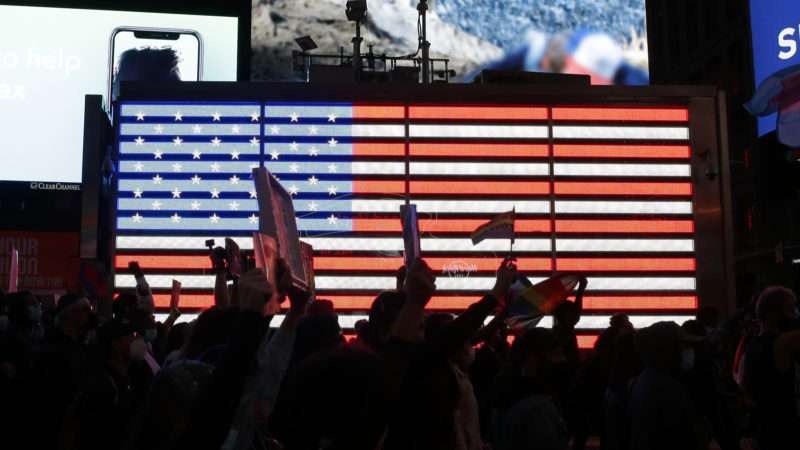 The proportion of Americans believing that it’s at least somewhat justifiable for their political party to use violence to achieve its goals has risen from fewer than one in ten just three years ago to one in three now, according to polls. Meanwhile, predictions abound of disruptions around the election and of fighting in the years to come. After months of social unrest and with the country’s political factions intent on mutual destruction, the U.S. looks at risk of becoming a failing democracy in which disputes are settled in the streets.

“Like a growing number of prominent American leaders and scholars, we are increasingly anxious that this country is headed toward the worst post-election crisis in a century and a half,” wrote Larry Diamond of the Hoover Institution, Lee Drutman of New America, Tod Lindberg of the Hudson Institute, Nathan P. Kalmoe of Louisiana State University, and Lilliana Mason the University of Maryland in an October 1 piece in Politico. “Our biggest concern is that a disputed presidential election—especially if there are close contests in a few swing states, or if one candidate denounces the legitimacy of the process—could generate violence and bloodshed.”

That squares with the insights of David Kilcullen, a former Australian Army officer and Bush (junior) administration counterterrorism advisor who warned in June that “America may be in what the CIA Guide to the Analysis of Insurgency calls ‘incipient insurgency.’”

Kilcullen is unimpressed by reports that this year’s protests have been mostly peaceful since, in his experience in countries including Iraq, “only a tiny minority—2 to 5 percent —of individuals in insurgencies, civil wars, or criminal gangs actually commit violence,” and that’s all it takes.

The U.S. Justice Department, too, is concerned “that toxic politics, combined with the potential uncertainty surrounding vote tallies, could lead to violent demonstrations or clashes between opposing factions” according to The Washington Post. As a result, the FBI is establishing a command center to deal with election-related disturbances.

It seems remarkable to contemplate modern Americans settling their differences through violence, but we’ve been a long time getting here. For decades, we’ve sorted ourselves according to our lifestyle preferences, and those preferences closely correspond with political affiliations. Adherents of our largest political factions enjoy lives increasingly separate from those with different views. Our neighbors largely live and think as we do so that we reinforce one another. Then, forced together by increasingly consequential contests for control of a government that reach ever deeper into life, Americans view opponents with growing hostility.

“Many Americans think people in the other party are ignorant, spiteful, evil and generally destroying the country,” Axios reported of its polling results in 2018. Twenty-one percent “of Democrats think Republicans are evil, and about the same share of Republicans (23%) think Democrats are evil.”

Last year, Pew Research found that “the level of division and animosity—including negative sentiments among partisans toward the members of the opposing party—has only deepened… For example, 55% of Republicans say Democrats are ‘more immoral’ when compared with other Americans; 47% of Democrats say the same about Republicans.”

If you think your opponents are “evil” and “immoral,” it’s unlikely that you’re going to view an election victory by them as legitimate and then willingly submit to the authority of such creatures. And then, when your allies are in power, it’s tempting to punish the hated enemy with the tools that you control.

“It is more and more dangerous to lose an election,” notes economist John Cochrane, a Senior Fellow of the Hoover Institution and an adjunct scholar of the Cato Institute who also fears political violence in the current environment. “Regulation has supplanted legislation, and dear colleague letters, interpretations, and executive orders have supplanted regulation… The vanishing ability to lose an election and not be crushed is the core reason for increased partisan vitriol and astounding violation of basic norms on both sides of our political divide.”

Such tactics were on display in 2018 when New York Gov. Andrew Cuomo used state regulators to lean on banks and insurance companies to get them to cut ties with the NRA and other gun-rights organizations. “If the @NRA goes bankrupt because of the State of New York, they’ll be in my thoughts and prayers. I’ll see you in court,” Cuomo tweeted in a tacit admission of weaponized regulatory power.

“If Cuomo can do this to the NRA, then conservative governors could have their financial regulators threaten banks and financial institutions that do business with any other group whose political views the governor opposes,” said the ACLU, which supports the NRA in a lawsuit against New York. “The First Amendment bars state officials from using their regulatory power to penalize groups merely because they promote disapproved ideas.”

As such examples accumulate, they feed “the burning conviction that the other side doesn’t just want its opponents to lose political races, but rather wishes for them to exist in a state of permanent, dangerous (perhaps even deadly) subordination,” conservative journalist David French observes in his recent book, Divided We Fall. He cautions that the country is in danger of fracturing as a result of its divisions.

If political violence is startling to Americans, the prospect of balkanization is even more so. But the possibility has been raised elsewhere, notably by the Transition Integrity Project, a high-profile Biden-leaning group of academics, journalists, and former government officials that war-gamed four possible presidential election scenarios with grim results. The group predicts “with a high degree of likelihood that November’s elections will be marked by a chaotic legal and political landscape” including violence.

For one scenario, a Trump win, “the game play ended in a constitutional crisis, with threats of secession.”

Honestly, a North America of statelets (presumably) more in-tune with the preferences of their inhabitants than is the current Leviathan sounds more tempting than escalating warfare among factions fearful of being crushed and living in a state of permanent subordination. Maybe we’d be happier as trading partners than as countrymen. But that doesn’t have to be the only choice. We could, instead, learn once again to leave each other alone.

No, that doesn’t mean liking one another—that seems highly unlikely anytime soon. Instead, we have to find a willingness to let other people live in ways, by values, and according to rules at odds with our own—so long as they return the favor. That is, we have to reacquire the ability to win elections without treating victory as an opportunity to crush our enemies. If we can do that, we’ll also be able to lose elections without treating loss as an existential threat worthy of all-out resistance.

But it’s difficult to see a path to a renewed national commitment to live and let live after years of working ourselves into the current frenzy. Instead, we may be in for a long and rough road of insurgency and bloodshed.