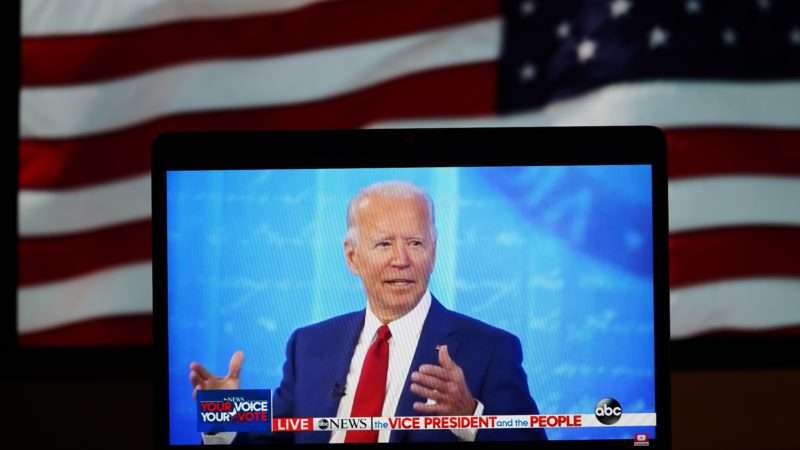 After weeks of failing to offer a straight answer to the question of whether he’d support adding additional justices to the U.S. Supreme Court, Democratic presidential nominee Joe Biden is testing out a new answer in advance of Thursday’s debate.

In a preview of an interview that will air Sunday on 60 Minutes, Biden outlines a plan for what he calls a “bipartisan commission” to examine potential reforms to the federal courts. In the clip, posted to the show’s Twitter feed on Thursday morning, Biden says he would fill the commission with constitutional scholars from across the ideological spectrum and that he would give the body 180 days to review not only court-packing but “a number of other things,” though he does not elaborate.

As dodgy political answers go, this one is actually pretty brilliant. Biden is giving the appearance of fleshing out a substantial plan to answer his critics, throwing a bone to liberal activists who favor increasing the number of justices on the Supreme Court, and still allowing himself plenty of ways to avoid actually doing that once he’s elected. It’s a Rorschach test of an answer, one that probably sounds good to most voters—who generally oppose court-packing but like the sound of bipartisanship—without committing a future President Biden to any particular course of action.

Recall that Biden has a long track record of opposing court-packing. In 1983, he referred to President Franklin Delano Roosevelt’s 1937 attempt to add justices to the Supreme Court as a “bone head idea” that “put in question for an entire decade the independence of…the Supreme Court.” He was still opposed as recently as last year’s presidential primary debates, saying in October 2019 that he “would not get into court-packing” due to fears that it would delegitimize the Supreme Court.

That’s the sort of decadeslong, consistent record that most politicians would be proud to highlight on the campaign trail. But Biden has gone soft on the question in recent months as some Democrats have suggested adding seats to the court to counter the expected confirmation of Amy Coney Barrett to replace the late Justice Ruth Bader Ginsburg. Biden has tried, sometimes awkwardly, to find a middle ground between his longstanding opposition to court-packing and his party’s fear of a 6-3 majority conservative Supreme Court.

In that context, this new promise to create a “national commission” seems mostly like a way to make the question go away. It’s a tried and true political strategy: punt a controversial issue to a panel of supposed experts to make it look like you’re doing something. As a longtime creature of the U.S. Senate—which isn’t called the “world’s most deliberative body” for nothing—Biden understands the value of doing nothing while looking like you might do something someday.

Still, there are two things we can definitively say about Biden’s newest take on court-packing. He has objectively backed away from his former position of opposing the idea, even if he’s opening the door only a crack. And he’s committed to waiting at least six months into his potential first term before doing it—in other words, it’s not important enough to rise to the very top of a Biden administration’s agenda. That’s good.

One more thing: You can almost certainly expect Biden to roll out this answer at tonight’s debate if the issue of court-packing comes up.

Indeed, this new approach to the question is a campaign strategy too: The image of a bipartisan commission mulling over high-minded constitutional questions about the right way for the country’s government to operate draws a pretty stark comparison with how the executive branch is currently running.