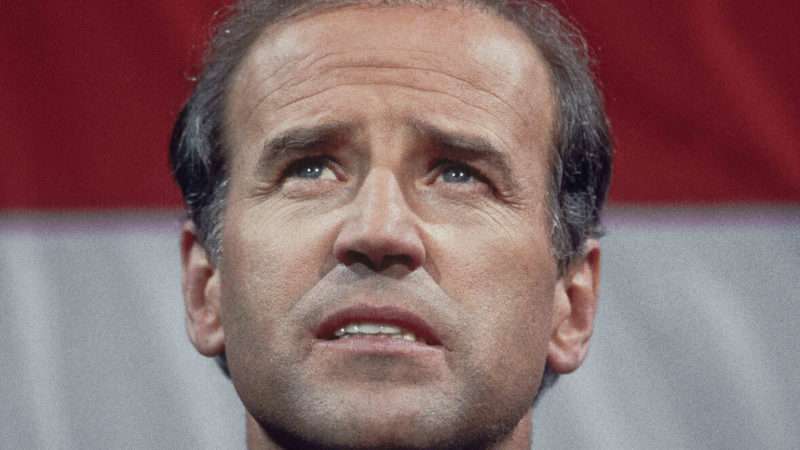 Now that the disastrous presidency of Donald Trump is likely coming to an end, presumptive President-elect Joe Biden will get the chance to make good on his promise to create “bold change” in the lives of all Americans. On his first day in office, Biden says that he plans to roll back many of Trump’s signature policies with his own sweeping executive orders, and he has promised to transform the economy to fight climate change, reassert America’s diplomatic and military power abroad, and establish new federal offices like that of a “national supply chain commander” to centralize control of commercial industry in response to the coronavirus pandemic.

It’s unclear what Biden will ultimately be able to accomplish as president, but he has already spent 44 years as a senator, and then vice president, trying to bring transformative change through federal action in response to supposed crises. And his record on issues including immigration, the drug war, criminal justice reform, and foreign intervention has been dismal.

As the president-elect pushes a new ambitious agenda, it’s worth remembering the impact of the far-reaching laws he has repeatedly helped pass, which have created enormous suffering and exacerbated some of the most critical problems still afflicting American society.

In the 1980s, Biden sought to escalate the drug war beyond what Presidents Ronald Reagan and George H.W. Bush had called for, and he co-sponsored legislation that locked up tens of thousands of predominantly young Black men for minor crack possession.

In the ’90s, he led the charge on a massive expansion of the death penalty and the militarization of law enforcement. The infamous 1994 crime bill, along with several other pieces of legislation Biden pushed for, expanded mandatory minimum sentences, created Three Strikes laws, and drove up the local, state, and federal prison populations.

In the 2000s, Biden played a key role in expanding warrantless surveillance, starting disastrous foreign wars, and building fences on the Mexican border.

Biden’s only solution to critical issues over nearly five decades in office has been to grow the federal government in an attempt to remake society for the better. In reality, his agenda has destroyed vulnerable communities and eroded civil liberties.

Though today his policy priorities have again shifted with the Democratic political winds, what has held constant is Biden’s commitment to bold state intervention in more areas of Americans’ lives. And he’s never stopped telling us that it’s all for our own good.

For the full video, links, and photo credits, visit: https://reason.com/video/2020/05/22/joe-bidens-bold-thinking-shredded-civil-liberties-and-destroyed-lives/