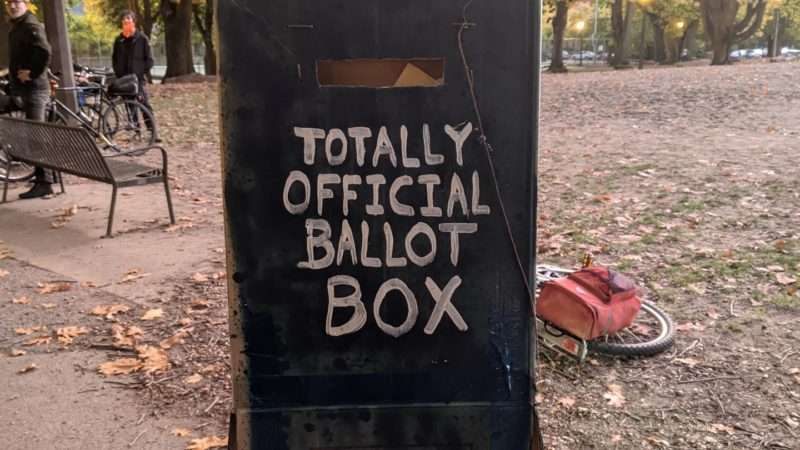 The scene at Irving Park in northeast Portland at 6 p.m. on Halloween looks pretty much like any other Saturday night in the park: Kids shoot hoops on the north end, people play tennis on the south, dogs run in the center. Tonight there’s also a Day of the Dead celebration, with singing and lighting candles and little kids in costumes spinning and eating cake.

Watching from the adjoining hillside are about 60 people in costumes of their own, the all-black clothing, face masks, and helmets of black bloc, here for tonight’s “Capitalism is Spooky” rally. That every other rally and march I’ve been to has appeared livelier and better-attended than this one may be due to participation burnout; Portland is on Night 158 of continual protests, with a few days taken off during the wildfires in September. Where there’s previously been pep and sloganeering, tonight there are hillside sitters looking bored with the Day of the Dead crew, with the toddlers dancing with their moms, maybe even with other people taking over a public space when, for the past four months, those have been their domain—parks and streets and Mayor Ted Wheeler’s apartment complex—their places to make a stand, and wasn’t it time for these others to clear out? So they could get on with their important work?

Tonight’s important work, per the online flyer, includes “No Cameras. No Peace Police. Total Abolition.” But by 6:30, there are no tricks or treats, no music, and, with the exception of some guy wearing a paper mask of Andy Ngo on the back of his head, no costumes. By all lights, it is a no-fun zone.

Would there at least maybe be a speaker, maybe mayoral candidate Sarah Iannarone, who just the day before had been endorsed by Vermont Sen. Bernie Sanders and who, as of late, has been trolling people with her communist-leaning enthusiasms? I mean, who better to talk up the evils of capitalism? And did the chubby black bloc guy drinking a Bud next to me think she’d show up?

Bud doesn’t seem particularly interested in the question, though he does offer, “Anybody is better than Ted Wheeler, who needed to pick a lane and stick to it.” He also thinks there’s a pretty good showing tonight, “Maybe 75 people.”

Sure, though previously there’ve been ten times as many. Then again, it’s Halloween, maybe people have plans, or kids.

“Most of these people are kids,” Bud says, looking at a few people in black bloc setting out the usual water and first aid. With the exception of one guy carrying a big red flag without insignia, there’s no color and no zip and the whole thing feels like a love affair gone flaccid. Though if we’re following script, the fireworks will start later, or the fires will. Does Bud guy think there will be marching tonight?

“Of course,” he says, though he doesn’t know where they’ll go; maybe the police station up in north Portland. What he does know is that there will be no filming, no livestreaming; that that’s been an edict since the Day of Rage on October 11, “when they pulled the statues down,” he says, before lumbering off, which is when I notice a brilliant blue sky streaked with pink cumulus clouds, and hear the Rolling Stones’ “Satisfaction” playing from the not-yet-dead Day of the Dead event.

I head to the dog run, where there are people in costume (tonight’s maybe-winner: a little girl dressed as a poop emoji) and plenty of laughing.

“Have you voted?” asks a guy dressed as a voting booth. I fill out a “ballot” and drop it in, then walk toward a dozen high school kids at a picnic table. Kanye West’s “Gold Digger” plays from some device; there’s the thwock thwock of the tennis, and it occurs to me that what is happening in Irving Park, a park I lived within six blocks of for 15 years, has very little to do with the people in black bloc sitting all sour on a hillside; that they are not the story the people of Portland are telling themselves.

One of the high school kids calls to me, “How’s your night going?”

Good, good. How about them?

“Good, I mean, it’s Halloween,” says the kid, who’s as beautiful as Taylor Hanson, as is the kid who sits beside him, who rolls a skateboard beneath his feet. Are they in tenth grade?

Did they see the people in black over on the hill? Do they know what’s going on?

It’s the folks who call themselves black bloc, anarchists, antifa.

Yes, some event they’re calling “Capitalism is Spooky,” after which they’ll probably march somewhere and set things on fire.

Have they heard about antifa and what they do?

“Yes, it’s very controversial,” says a girl in a sparkly face mask. “They do break stuff and set stuff on fire but honestly, I understand why.”

“I think protesting is one thing. But breaking shit and setting stuff on fire isn’t the best,” says Hanson 2. “I support the protests, but not the riots.”

“It’s not doing much except destroying our city,” says Hanson 1.

“Originally, when they started doing that stuff, and having all the media cover it, was a huge step in bringing attention to it,” says Sparkle. “The continuation of it is honestly not, like, [good].”

Do their parents talk to them about this—the fires and stuff?

“My parents kind of support it but also they don’t support some of the things,” says Sparkle. “They support what they stand for but not the actions.”

“I know some people involved in it,” says a kid who looks a little like Pete Sampras. “I’m not going to say their names, but my parents know them too and are kind of… in charge of them; it’s an individual thing where like, ‘You’re old enough to be making your own decisions, but is this how you think change is going to be made?’”

Does he think this is how change is going to be made in Portland?

“I mean, I think it’s made their voices heard, but I think there are definitely other ways they could have done it than to riot,” he says. “But that’s kind of the way it went and they’re all just super angry about it. I think it’s just angry young people not liking whatever the government says.”

Young people can be angry or happy but black bloc in its current iteration seems so joyless, plus have they seen any changes yet that are positive?

“Not yet,” says Sparkle.

Their mission seems bent on destruction, I offer.

“Isn’t that antifa?” says Hanson 1. “Plus there’s a lot of controversy going on around politics right now, so it’s difficult.”

“I mean, the election’s in three days,” says Hanson 2.

What do they think is going to happen?

“Blue sweep,” says the lanky kid to my left, pulling on a giant spliff.

“I hope so,” says Sparkle. “It might be another thing like 2016, where Biden takes the popular vote but Trump wins the Electoral College.”

If they were in charge of changing things in Portland, what would they do?

“I’d redistribute the wealth of the police,” says Sampras. “I don’t want to totally defund them but they don’t need their total budget. And change some of their responsibilities regarding mental health.”

“It can be looked at,” says a girl who’s not yet spoken, a petite blond in what appears to be a Dallas Cowboys cheerleader costume. “The whole idea of ACAB [All Cops Are Bastards] and abolishing the police is good, but it would be really hard to do. But something that maybe needs to be done—not so there’s no police force—is to train people for certain situations so that you don’t have people trained less than electricians and hairdressers coming into situations that require serious mental health background knowledge. It’s just not fair to basically give basic people a savior complex and expect them to handle any situation.”

“She’s way too smart,” says Hanson 1, and, when I ask if I can take their picture, looks at the joint in his hand and says, “We’re kinda good.”

Thanks so much guys, happy Halloween, thanks for talking to me.

“Thanks for talking to us,” says Hanson 1.

I walk out of the park, past the black blockers—a few more bodies now, if still no music—and think how they are not the future, and they are not the future because people do not want to be told no all the time—no pictures, no interviews, no joy unless countenanced by a crew that, from the sourpuss looks tonight, are having no fun at all. I think, too, how a bunch of semi-stoned 14-year-olds not only are adorable and generous, but are grappling with ideas about how to fix the city in ways the black bloc folks are not, maybe even in ways the mayor is not.

Instead of following the black bloc into the night, where it will turn out they break into businesses and threaten people on-camera with things like, “We know who you are,” I head home, to pass out candy to trick-or-treaters, which seems the sweetest thing I can do, considering how sweet some kids have just been to me.