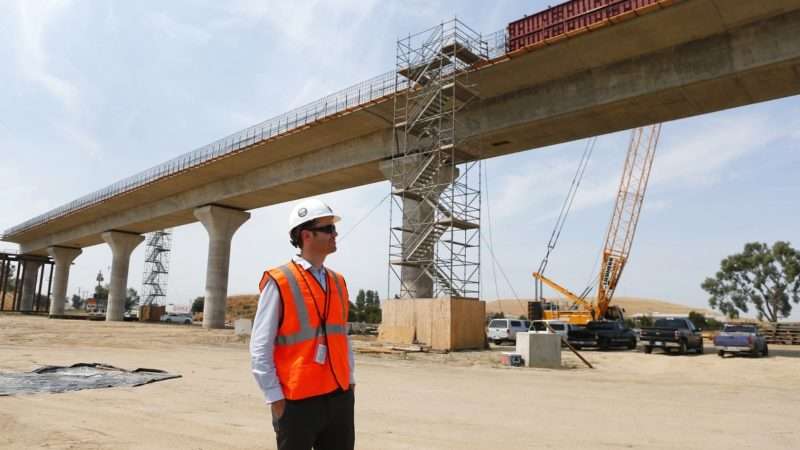 Joe Biden’s election as president may be just what California’s financially strapped money pit of a high-speed rail plan needs to keep going, regardless of whether or not it’s a sound idea (it’s not).

Biden wants to spend $11 trillion on an assortment of policies. He is noted for his love of trains and, during the Democratic primary debates, promoted a national network of high-speed rail, which he said would get millions of cars off the road. That’s likely not true: in the event that America did have a national high-speed train network, it would probably draw customers mostly away from airlines, not personal cars.

Regardless, Biden made high-speed rail part of his campaign platform. However, there’s an interesting omission in the transit plans listed on his transition site. Here’s what he’s promising to do:

Provide every American city with 100,000 or more residents with high-quality, zero-emissions public transportation options through flexible federal investments with strong labor protections that create good, union jobs and meet the needs of these cities—ranging from light rail networks to improving existing transit and bus lines to installing infrastructure for pedestrians and bicyclists.

Nothing there about high-speed rail or expansion of train systems beyond cities. But maybe it’s in his national infrastructure section? Nope. Here’s what that says:

Again, no national bullet train. Surprisingly, given Biden’s adoration of them, there’s no reference to trains at all.

Don’t read too much into it. Biden has selected teams to review all federal agencies for his transition into office. To head the team analyzing the Department of Transportation (and Amtrak), he chose the CEO of Los Angeles County’s transit agency, Phil Washington. Washington is big on light rail, working on expansions for it in Los Angeles and in his previous work heading Denver’s transit program. Therese McMillan, executive director of the Bay Area’s Metropolitan Transportation Commission, is also on the team, along with several union representatives. Notably, there is nobody from Lyft, Uber, or any other company that provides market-based solutions to transit needs.

California’s high-speed rail does not immediately appear to be a top priority for Biden, nor should it be. The finances of California’s high-speed rail project are simply not in a good place right now. First of all, the project itself is a massive money pit, and costs have skyrocketed far beyond what taxpayers agreed to when they approved Proposition 1A in 2008. That proposition allocated $9 billion to start the project, which voters were told would ultimately cost $33 billion. The rail project is now estimated to cost more than $80 billion to complete. It also won’t be as fast as promised and will likely need continued government subsidies to actually operate.

Second, the skyrocketing costs have collided with the terrible fiscal impacts of the coronavirus. California is now facing massive deficits due to declines in tax revenue due to the pandemic and lower-than-projected revenues from cap-and-trade greenhouse gas auctions, a portion of which are devoted to the train line’s construction.

Probably the most important concern from California’s rail project right now is that the Department of Transportation under President Donald Trump has frozen a federal grant of more than $900 million promised under President Barack Obama. The Trump administration justified freezing the funds by citing the rail project’s inability to meet its schedule and claiming that the California High-Speed Rail Authority (CHSRA) has misused the money it already received.

So, will the Biden administration reverse course and possibly come up with more money for California’s rail system? The transition team’s press office declined to respond to emailed questions from Reason asking about possible high-speed rail funding plans. CHRSA Chief Executive Officer Brian Kelly responded with a simple statement, saying, “We hope to establish a functional and cooperative relationship with our federal partner on this project. We are encouraged by the opportunity to do so.”

Loading...
"Not by might, nor by power, but by my spirit, saith the Lord of hosts." Zechariah 4:6
BEFORE IT'S NEWS ON TELEGRAM
GET THE TELEGRAM APP - https://telegram.org/ JOIN OUR CHANNEL - https://t.me/BeforeitsNews
Read it..
BEFORE IT'S NEWS
SIGN UP FOR OUR NEWSLETTER
Today's Top Stories
Plugged-in Patriots Lay Out the Epic Trump Counterattack That’s Going to Expose and Destroy the Criminal Democrat Deep State
Amazing Breaking News For President Trump As The 4 Conservative Supreme Court Justices Have Now Been Reassigned To Cover MI, WI, PA And GA!
Emergency Update! Trump Readies Special Forces Units for Domestic Action! - Must Video
Best & Taylor Intel (11/20/2020) | Election: 'Something Big is Stirring in the Background' — Zombie Va666ine?​​​​​​​ — Mark of the Beast?
Epic Trump Counterattack Going to Expose & Destroy the Criminal Democrat Deep State! - Mike Adams +Videos
X22Report: Information Warfare, Buckle Up The Deep State Will Unleash Their Fury When Their [E] Agenda Fails! - Great Dave Hayes, PrayingMedic Video
Frequent, Rapid Testing Could Turn National COVID-19 Tide Within Weeks
Depopulation Agenda Disbelief
Sidney Powell Goes Full Beast Mode After Tucker Calls Her Out on His Show! She Is Not Happy! - Must Video
Robert David Steele: Amelia Love - Paul Boys - JFK Jr - Donald Trump Election 2020 - Deep State
Loading...
Featured
General Flynn Slams Tucker Carlson After Fox Host Doubts Sidney Powell
A Hacker Shows Us How Easy it Is to Manipulate Voting Machines!
Sidney Powell Has Proof AOC & Bernie Caught Sabotaging Election! - Must Video
Panic & Desperation Sweep Across America as Fears of a “Dark Winter” Continue to Rise! - Epic Economist Video
The Party Is Over! “Releasing the Kraken” Spells the Demise of the Democrat Party! +Video
Computer Geek Uncovers Smoking Gun Evidence of Dominion Voter Software Switching Votes From Trump to Biden
Mainstream Media Guilty of Treason, Usurped Constitutional Powers of the Electoral College, Violated the Sedition Act
Sidney Powell Has “Smoking Gun Evidence” to Prove Massive Election Fraud in the Next Two Weeks! - Mike Adams +Videos
Joe Biden Proves Once Again Why He Has No Business Being the Leader of Our Free World! - Must Video
Boston’s Forgotten Lockdown - In 2013, the City Locked Down for a Single Day in Response to a Concrete Threat - The Reaction From Media and Elites Might Surprise You
Loading...
Top Global
China Joe to Rejoin Paris Climate Agreement Which No One Is Really Following or Something
Leaked Video: Top Canadian Pathologist Tells Alberta Government COVID Is "The Greatest Hoax Ever Perpetrated on an Unsuspecting Public" (Video)
Depopulation Agenda Disbelief
The Covid Scandemic Is Unravelling - TheCrowhouse
Syria/Iraq update 11/20/2020.. TURKISH TROOPS COME UNDER ATTACK IN SYRIA
I need Fauci to explain to me how I, an unvaccinated person, am a danger to a vaccinated person?
World Economic Forum Predicts A Crisis Bigger Than COVID -- Global Cyber Attack Shutting Down Power Grid, Transportation, and Financials
the whole world is in shock: Nowhere on Earth Will Be Safe from a U.S.-China War
This Is a Meeting Privately Recorded in Edmonton, Alberta, Canada, With Dr. Roger Hodkinson Last Week! This Is the Biggest Hoax Ever Perpetrated on an Unsuspected Public
Deepstate Going Down All Over The World!! Military Only Reporting To Trump; Counter Moves!!! (Must Video)
Loading...
Top Alternative
Anonymous: "You Need to Hear it, We Know Who They Are"
LA Marzulli: Was There Fraud? What Is the Truth?
Photos of Grey Alien, Los Alamos, David Sereda, Analysis
The Vaccines!!!
10 Ways to Fool the Authorities and Escape Martial Law- A violent and horrifying life in a concentration camp is what you may face one day under martial law
Terence McKenna Explains Why Television is the Most Dangerous Addictive Drug in Society
4-Year-Old Almost Dies due to Lung Infection Caused by Prolonged Mask Wearing – Doctor Rants “How Many Children Must Die?”
ZetaTalk Newsletter Addendum for November 22
Depopulation Agenda Disbelief
SATURDAY ESSAY: Are we seeing the decline of Western Civilisation? by Wiggia