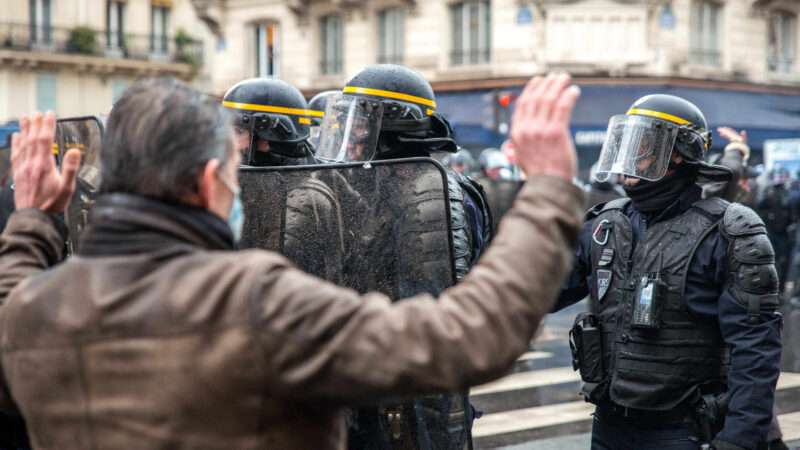 In a year of extraordinary and often terrible actions taken in response to COVID-19, yet another international civil society group warns that governments are leveraging the pandemic to tighten controls over their subjects. Ominously, it’s not the first such warning and comes as even traditionally liberal democratic countries step up surveillance of dissidents and crack down on public opposition.

“The COVID-19 pandemic has had a dire impact on civic freedoms globally,” Civicus, a South Africa-based group that promotes civil society and freedom of association, reported last week. “Our research shows that governments … are using the pandemic as an opportunity to introduce or implement additional restrictions on civic freedoms.”

The United States drops in status from “narrowed” to “obstructed” for “restrictive laws, the excessive use of force against protesters, and an increasingly hostile environment for the press.” The Civicus rating emphasizes militarized tactics and mass arrests in response to the Black Lives Matter protests that erupted this year. While those protests aren’t explicitly linked to the pandemic, they were likely exacerbated by the disruptions and economic pain caused by lockdowns that brought simmering preexisting tensions to a boil.

Unfortunately, Civicus’s ratings criteria seem anecdote-driven and rather arbitrary. While the U.S. is (rightfully) dinged for sometimes heavy-handed treatment of protesters (while police in other locations seemingly surrendered the streets to favored political factions), other countries get a relative pass for cracking down on public expression that was specifically targeted at pandemic responses.

Australia, for example, is classified as “narrowed”—a better ranking than the U.S.—even as authorities arrest people for merely planning to protest against pandemic-related lockdowns. The country is also moving to centralize surveillance of travelers in the name of public health and to ease domestic monitoring of electronic communications.

“Journalists in France have been obstructed in doing their jobs through intimidation and detention while covering protests,” observes Civicus, which ranks the country as “narrowed.”

Last Friday, 142 people were arrested in Paris during demonstrations against a law that would restrict photographing police officers during such events as protests against lockdowns.

Germany‘s arrests of anti-lockdown protesters are acknowledged even as the country gets an “open” rating.

Unmentioned is Germany’s surveillance of opponents to restrictive anti-pandemic measures on the grounds that they have been “infiltrated by extremists.” The “move is effectively a public warning to sympathizers and leaders of the group—which officials described as the ‘epicenter’ of Germany’s coronavirus protests—but it falls short of banning the movement,” notes The Washington Post.

The listing for Israel—ranked as “obstructed”—focuses on the treatment of Palestinians. That’s certainly an important issue. Still, as Civicus emphasizes governments’ exploitation of health concerns to justify expanded authority, it’s worth mentioning that the Shin Bet, the country’s internal security force, presented bogus information to gain authorization to monitor citizens for coronavirus. “In other words, the committee voted and reaffirmed surveillance on Israeli citizens by the Shin Bet based on partial or even misleading data,” according to Haaretz.

That said, the Civicus warning is timely, and the organization’s concerns are shared by others.

“Numerous governments have used the COVID-pandemic to repress expression in violation of their obligations under human rights law,” United Nations Special Rapporteur on Freedom of Expression David Kaye noted in July.

“For authoritarian-minded leaders, the coronavirus crisis is offering a convenient pretext to silence critics and consolidate power,” Human Rights Watch warned back in April.

There’s widespread agreement, then, that government officials around the world are exploiting the pandemic to expand their power and to suppress opposition. That’s the case not only among the usual suspects where authorities don’t pretend to take elections and civil liberties seriously, but also in countries that are traditionally considered “free.”

It’s wildly optimistic to expect that newly acquired surveillance tools and enforcement powers will simply evaporate once COVID-19 is sent on its way. The post-pandemic new normal is almost certain to be more authoritarian than what went before.

Several organizations make attempts at rating freedom around the world, such as the Press Freedom Index published by Reporters Without Borders and the Heritage Foundation’s Index of Economic Freedom. The more holistic assessments—such as those by Amnesty International and Human Rights Watch—tend toward narrative summaries rather than comparative rankings. That may well reflect the difficulty (seen in the Civicus rankings) in fairly gathering and weighting governments’ treatment of their citizens across a multitude of categories.

For my money, the best effort to date that lets us compare countries and see the extent to which we’re becoming more or less free is the Human Freedom Index published by organizations including the Cato Institute, Canada’s Fraser Institute, and Germany’s Friedrich Naumann Foundation for Freedom. Last published in 2019, that “global measurement of personal, civil, and economic freedom” uses 76 indicators including rule of law, freedom of movement, freedom of expression, and freedom to trade.

That’s a lot of ground to cover, and the 2019 publication relied on 2017 information—“the most recent year for which sufficient data are available”—to arrive at its rankings. Given that 2020 still has several weeks in which to throw fresh hell our way, we likely have to wait a couple of years to discover whether countries have held their rankings (the U.S. came in at 15) and what those rankings mean in a changing world.

But with Civicus only the latest organization to point out that “the COVID-19 pandemic has had a dire impact on civic freedoms,” we don’t need detailed rankings to know that authoritarian-minded government officials have found opportunity in public health fears.