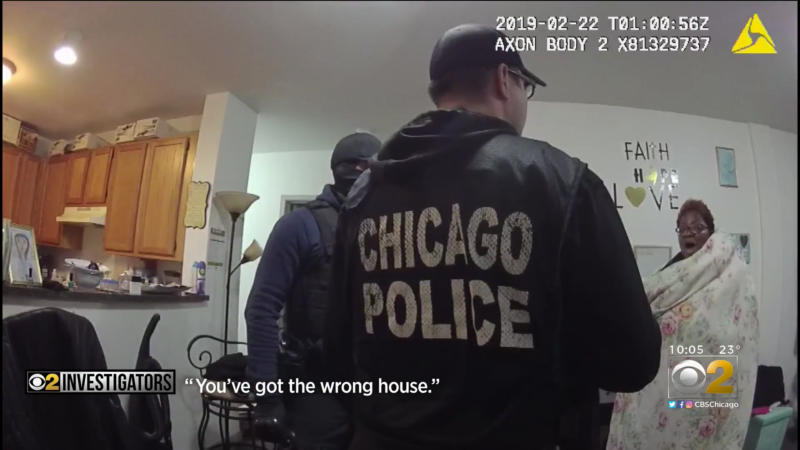 Chicago police burst into the apartment of an innocent woman based on a faulty tip and handcuffed her while she was naked, forcing her to stand in full view of male officers as they searched her home, newly revealed body camera footage shows.

Local news outlet CBS 2, which has been investigating wrong-door raids by Chicago police for the past several years, first aired the footage of the 2019 incident last night, despite an attempt by the city of Chicago to block the TV station from running it.

“I feel like they didn’t want us to have this video because they knew how bad it was,” the woman in the footage, Annette Young, told CBS 2. “They knew they had done something wrong. They knew that the way they treated me was not right.”

The body camera footage is part of a federal civil rights lawsuit filed by Young, who alleges the February 21, 2019 police raid traumatized her and violated her Fourth Amendment rights against unreasonable searches and seizures.

The video shows officers using a battering ram to enter Young’s house, where she was in her bedroom changing. Young was handcuffed naked. One officer attempted to wrap a blanket around her, but because she was handcuffed, it kept slipping. She repeatedly told the officers that they had the wrong house. CBS 2 reports:

“I don’t have to shout?” Young yelled. “This is fucking ridiculous. You’ve got me in handcuffs. I’m naked, and you kicked my house in. I keep telling you, you’ve got the wrong place.”

Both Young and CBS 2 filed public records requests for the body camera footage, but Chicago refused to release it. The footage was only released to Young after a court order, which also included a confidentiality order.

Yesterday, after learning that CBS 2 had obtained the footage and was planning on airing it that night, the city of Chicago filed a motion to enjoin CBS 2 from running it, arguing it would violate the confidentiality order. The federal judge in Young’s case rejected the motion on the grounds that CBS 2 was not a party to the order.

CBS 2′s investigation shows that the raid on Young’s home was completely avoidable if Chicago police had done the bare minimum to vet the information on the search warrant. The warrant was based on a tip from a confidential informant, who had provided the wrong address for a man suspected of having an illegal gun. The suspect lived next door to Young.

Young’s case is just the latest in a long string of lawsuits filed against the Chicago Police Department for terrorizing innocent families during wrong-door raids that were based on sloppy, unverified search warrants.

Another federal civil rights lawsuit filed in August alleges Chicago police ransacked a woman’s house and held a grandmother and four-year-old at gunpoint based on a sloppy search warrant. The lawsuit says the search warrant was based on a tip from an anonymous informant that the woman’s son possessed an unlicensed handgun. Chicago police never bothered to learn that the son had moved to California several years ago.

CBS 2′s investigation found that Chicago SWAT teams were frequently relying on unverified search warrants to ransack houses; hold families, including children, at gunpoint; and in one case handcuff an 8-year-old child. In another case, 17 Chicago police officers burst into a family’s house with their guns drawn during a four-year-old’s birthday party. One Chicago family says police officers raided their house three times in four months looking for someone that the family says it doesn’t even know.

In 2018, the Chicago City Council approved a $2.5 million settlement to a family who claimed CPD officers stormed their house and pointed a gun at a three-year-old girl.

These horror stories led Chicago’s inspector general to launch an investigation last year into how Chicago police vet information and execute search warrants. That investigation is still ongoing, according to the office’s website.

The Chicago Police Department also revised its policies for search warrant executions in January, requiring officers to “maintain a sensitive approach and use due care to safeguard the physical and emotional well-being” of any children present “to minimize trauma following the execution of a search warrant.”

Reason reported last year on public records showing that Chicago police executed more than 11,000 search warrants over a five-year period, predominantly in the city’s low-income and minority neighborhoods, and nearly half of them did not result in an arrest.