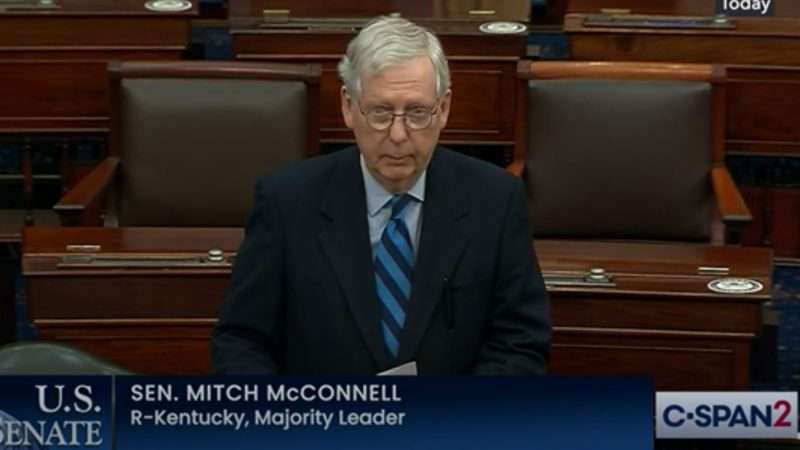 Confirming his decisive break with Donald Trump, Senate Minority Leader Mitch McConnell (R–Ky.) yesterday said the “violent criminals who tried to stop Congress from doing our duty” by invading the Capitol on January 6 were “fed lies” and “provoked by the president and other powerful people.” That characterization, which McConnell offered in a speech on the Senate floor, jibes with the charges in the article of impeachment against Trump that the House of Representatives approved a week after the riot. It therefore suggests that McConnell is open to convicting Trump in the Senate, which would be a strong signal to his fellow Republicans.

The House noted that Trump “repeatedly issued false statements asserting that the Presidential election results were the product of widespread fraud and should not be accepted by the American people or certified by State or Federal officials.” Trump reiterated those false claims in the speech he delivered to thousands of angry followers, who had gathered in D.C. at his behest to “stop the steal,” shortly before a joint session of Congress was scheduled to affirm President Joe Biden’s election victory. “We won this election, and we won it by a landslide,” Trump said. “If you don’t fight like hell, you’re not going to have a country anymore.” Given the context, the article of impeachment says, Trump’s comments “encouraged—and foreseeably resulted in—lawless action at the Capitol.”

McConnell, who in private reportedly has said he believes Trump committed impeachable offenses, has now publicly endorsed the main thrust of the House’s charges. His reasons for doing so are both personal and political. McConnell—who even before the riot condemned the effort to stop Biden from taking office based on “sweeping conspiracy theories” that sowed doubt about the election “without evidence”—clearly was shaken by the violent invasion of his own workplace. More important, he has decided that the Republican Party’s continued viability depends on separating itself from the dangerous demagogue whose whims have defined its agenda for the last four years.

There are sound reasons for believing that, even aside from the proposition that a political party should stand for something other than a cult of personality. Trump’s domination of the GOP resulted in Democratic control of both the White House and the Senate. The New York Times reports that “McConnell’s allies say he has grown increasingly concerned that if party leaders do not intervene, the president’s campaign to discredit his own defeat could do lasting damage both to democracy and to Republicans’ political fortunes, driving them into a permanent minority in Washington.”

The loss of the Senate was directly attributable to Trump’s fantasy of a stolen presidential election, which he promoted instead of focusing on winning the crucial January 5 runoffs in Georgia. Worse, Trump’s general warnings that absentee ballots are inherently suspect and his specific claim that Georgia’s election system was hopelessly corrupt discouraged even ardent Trump supporters—especially ardent Trump supporters—from voting in those races. And his demand that the party’s Senate candidates in Georgia back up his outlandish claims about massive election fraud probably also turned off voters who were less enamored with Trump. McConnell has Trump to thank for his demotion from majority leader to minority leader.

Although a large bloc of Republicans remains loyal to Trump, recent polling underlines the potential political cost of catering to them. Since the attack on the Capitol, Geoffrey Skelley notes at FiveThirtyEight, “Trump’s approval rating has plummeted at a record rate.” According to the site’s composite index, Trump’s net approval rating—the difference between the percentage of Americans who thought he was doing a good job and the percentage who disagreed—fell from –10.3 points on January 6 to –16.8 points on January 14. That 6.5-point drop in eight days, Skelley says, is “the biggest drop in Trump’s net approval that our tracker has ever recorded.”

For most of Trump’s presidency, the Pew Research Center noted last Friday, his job approval rating “remained more stable than those of his predecessors; it never surpassed 45 percent or dipped below 36 percent.” But the share of Americans who approve of Trump’s performance, according to Pew, “now stands at just 29 percent, down 9 percentage points since August and the lowest of his presidency.”

Pew found that three-quarters of Americans, including 52 percent of Republicans and 95 percent of Democrats, believe Trump “bears at least some responsibility” for the Capitol riot. In the same survey, which was conducted January 8–12, more than two-thirds of respondents said they did not think Trump should “continue to be a major political figure for years to come.” Pew did not provide a party breakdown for that question, but we can be pretty sure there was a dramatic split between Republicans and Democrats, and therein lies the risk for McConnell and likeminded Trump critics.

Before the the Capitol riot, polls found a large majority of Republicans agreed with Trump that the presidential election was compromised by widespread fraud. “The only lies that were fed are that Joe Biden won the election,” Amy Kremer, a leader of the “Stop the Steal” movement, tweeted yesterday in response to McConnell’s criticism of Trump. “Your comments are bullshit & if you think Pres Trump’s base is going anywhere, u are sadly mistaken.”

On Fox News—where reporters were skeptical of Trump’s fraud claims from the beginning but several hosts promoted them, only to be rebutted by corrective stories that the channel aired after it was threatened with defamation lawsuits—Sean Hannity slammed McConnell last night. “Soon-to-be Minority Leader Mitch McConnell and a handful of other long-serving establishment Republicans are trying to reassert control of the GOP, and their playbook is sadly all too predictable,” he said. “Instead of picking up the mantle and promoting the president’s bold America First agenda, they are cowering in fear, wilting under the pressure from the media mob, liberal Democrats, and Big Tech companies. Many spineless Republicans are joining forces with their Democratic friends to repudiate all things Trump.”

Hannity was a persistent promoter of the delusion underlying the deadly assault on the Capitol. But he thinks Republicans should forget all that and continue to take their lead from Trump. McConnell thinks that would be a grave political mistake.

Sen. Lindsey Graham (R–S.C.), who years ago switched from harsh criticism of Trump to humiliating obsequiousness, seems to agree with Hannity. “I’m looking for our leadership to recognize that the best thing for the Republican Party and the country” is “moving on,” he said after McConnell’s speech. If “moving on” means consigning Trump’s reckless behavior and its shocking consequences to the memory hole, the GOP will richly deserve the fate that McConnell fears.