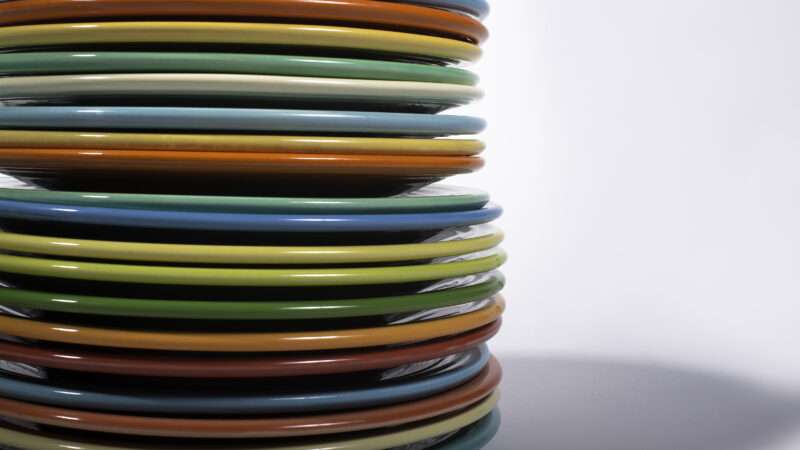 The students were evacuated to the football field as Hazmat teams rushed to the scene. The local prosecutor was alerted, as were the police. Responders entered the building and went room by room. What calamity beset Haddon Township High School in New Jersey’s Camden County last week? A bomb threat? A gas leak? Anthrax?

Specifically, Fiestaware, the colorful plates that took the U.S. by storm during the Great Depression. A sophomore had brought a quarter-size piece to his science class, because some of the plates were originally glazed with a red color that contained uranium oxide (at least until our war effort required uranium for the atom bomb, at which point the government confiscated them). The student had received a Geiger counter for Christmas and was going to do a little experiment in class.

That was on January 4. His teacher thanked him for bringing in the sample. By January 8, someone had determined the plate was a biohazard.

At 11:15 a.m., The Chery Hill Courier-Post first reported, the students were evacuated. The sophomore (whose name was not disclosed to the media) wasn’t one of them because, due to COVID-19 protocols, he attends school in person only on Mondays and Thursdays.

But he did not go unnoticed. By 2:00 p.m. there were six vehicles, lights flashing, in front of the student’s home, including one from the Camden County Prosecutor’s Office, according to The Philadelphia Inquirer.

The teen emerged to explain that the whole response, “Was a dramatic over-exaggeration… I gave them a quarter-size [piece of plate] that was enclosed in plastic so it couldn’t be tampered with that gave off less radiation than most things you can find in an antique store. It was intended to be used as a source for calibrating Geiger counters.”

Instead it became a source for calibrating school board over-reactivity. While the evacuated kids were allowed back into school after half an hour, the school board released a notice that a student had brought a “potentially dangerous substance” into the school.

If I were a mom there, I’d assume the teen brought in a vial of ricin—not a chip off the most collected dinnerware in America.

The prosecutor nonetheless asked the public to contact the police “if you have any information that could help this investigation.”

I actually do have some information: “There is no record of anyone ever becoming sick from manufacturing or using radioactive Fiestaware,” according to ScienceNotes.org.

The whole incident calls to mind the evacuation of Totino-Grace High School in Fridley, Minnesota, several years back because of a “chemical spill.”

That is, a student had broken a thermometer.

And frankly, both these incidents remind me of the kabuki concern shown by fire and police departments when a child is discovered waiting in a car for a short time, neither freezing nor boiling, while their parents run an errand. Here’s one example: A child who snoozed for 20 minutes while his parents bought Christmas lights was rushed to the hospital in an ambulance, even though everyone could see he was fine.

Sometimes, a wait is just a wait, and a plate is just a plate.