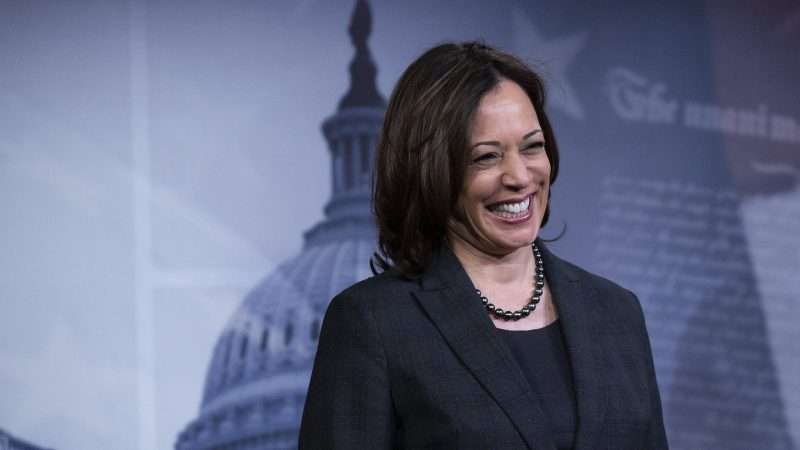 When The Washington Post published a 2019 campaign trail feature about then-presidential hopeful Kamala Harris’ close relationship with her sister, it opened with a memorable anecdote in which Harris bizarrely compared the rigors of the campaign trail to…life behind bars.

And then proceeded to laugh—at the idea of an inmate begging for a sip of water.

It was an extremely cringeworthy moment, even by the high standards set by Harris’ failed presidential campaign. But now that Harris is vice president, that awful moment has seemingly vanished from the Post’s website after the paper “updated” the piece earlier this month.

Here’s how the first seven paragraphs of that article, originally published by the Post on July 23, 2019, and bylined by features reporter Ben Terris, originally appeared:

It was the Fourth of July, Independence Day, and Kamala Harris was explaining to her sister, Maya, that campaigns are like prisons.

She’d been recounting how in the days before the Democratic debate in Miami life had actually slowed down to a manageable pace. Kamala, Maya and the rest of the team had spent three days prepping for that contest in a beach-facing hotel suite, where they closed the curtains to blot out the fun. But for all the hours of studying policy and practicing the zingers that would supercharge her candidacy, the trip allowed for a break in an otherwise all-encompassing schedule.

“I actually got sleep,” Kamala said, sitting in a Hilton conference room, beside her sister, and smiling as she recalled walks on the beach with her husband and that one morning SoulCycle class she was able to take.

“That kind of stuff,” Kamala said between sips of iced tea, “which was about bringing a little normal to the days, that was a treat for me.”

“It’s a treat that a prisoner gets when they ask for, ‘A morsel of food please,’ ” Kamala said shoving her hands forward as if clutching a metal plate, her voice now trembling like an old British man locked in a Dickensian jail cell. “‘And water! I just want wahtahhh….’Your standards really go out the f—ing window.”

It should go without saying that choosing to run for the most powerful political office in the world is absolutely nothing like being behind bars—and getting to squeeze in a morning SoulCycle session before sitting down for an interview with a national newspaper is not remotely the same as dying of thirst. None of this is funny.

The scene was a brilliant bit of reporting and writing because it did what few political features can accomplish: showing, rather than telling, something about the candidate at the center. Harris made her name as a prosecutor, and her track record includes defending dirty cops and laughing off criticism of her history of throwing poor parents in jail when their kids missed school. The Post profile provided a mask-slipping moment that seemed to perfectly capture a warped sense of justice and lack of basic human dignity—all in just a few hundred words.

We’ve republished that passage here because you won’t find it on the Post‘s website any longer.

The rest of the profile is still there, but with a new opening anecdote (presumably authored by political reporter Chelsea Janes, whose byline has been added to the piece and who has authored several fawning pieces about Harris this week) that compares now-Vice President Harris’ relationship with her sister to that of former President John F. Kennedy and his brother Robert. After the opening section, the rest of the piece appears nearly identical to the version originally published in July 2019.

But what happened to the old version? The headline for that 18-month-old article still appears on Terris’ page on the Post website with the original date it was published, but clicking the link redirects users to the new version published this month—the version that omits Harris’ awful commentary about campaigns and prisons.

Other links to the original piece also now redirect to the sanitized version. Reason‘s Elizabeth Nolan Brown, for example, highlighted the Terris profile of Harris on the July 24, 2019, version of the Reason Roundup. Click through that link now, however, and you won’t find Harris’ inartful “joke” about inmates dying of thirst.

The original quote might have demonstrated something about Harris—indeed, it suggests why her presidential primary campaign flopped so hard—but its disappearance suggests something about the Post, and about the way traditional political media is preparing to cover Harris now that she’s one heartbeat away from the presidency.

Reason asked the Post why the Harris feature was updated, and if the paper could point to other examples of “updating” political features to remove details that show officials in an unflattering light.

As part of an online series rolled out before President Joe Biden’s and Harris’ inauguration, “we repurposed and updated some of our strong biographical pieces about both political figures,” Molly Gannon Conway, the Post‘s communications manager, told Reason via email on Thursday. “The profile of Maya Harris was updated with new reporting, as noted online, using the existing URL. The original story remains available in print.”

Conway did not include any other examples of content that had been similarly updated. She also did not respond to a question about whether Harris’ team had requested the change. The vice president’s office did not return a request for comment.

The Post, of course, can do whatever it pleases with its own content. It can update or rearrange or delete any detail in any story at any time.

Still, the decision to remove that specific passage—and to replace it with a puffy opening about how Maya has “been a constant companion along Kamala Harris’s journey into history”—is questionable at best. Yes, Harris’ inauguration as America’s first female vice president is historic, but that’s no reason to ignore or erase her troubling history as a cop and politician. It also raises questions about the Post’s approach to covering Harris going forward. At a time when legacy publications are increasingly seen as playing for one political “team” or the other, this type of editorial decision will not do anything to fix that perception—is there any doubt that the Post would not have treated an inartful comment from Mike Pence in the same way?

Intentional or not, the memory-holing of the older version of the piece sends a message that the Post is willing to pave over its own good journalism to protect a powerful politician from her own words.

Luckily, nothing is ever really gone on the internet.