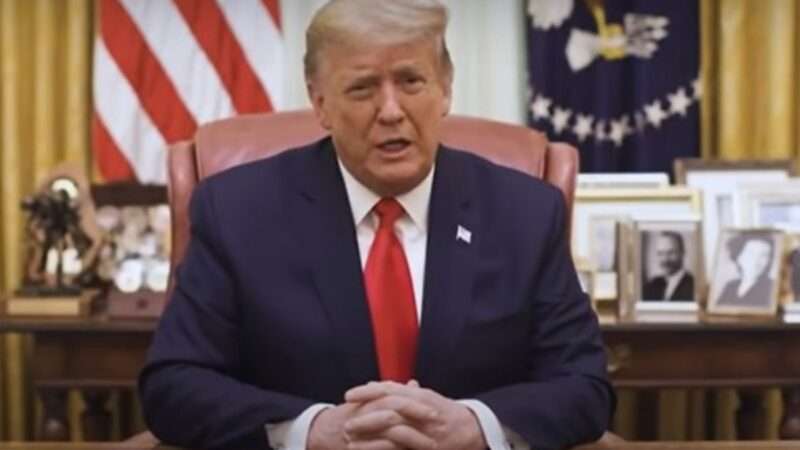 Apparently it took two impeachments to make Donald Trump presidential. Watching the five-minute message of peace and unity that the White House released this evening, many Americans will be inclined to wonder: Where has this guy been for the last four years, and especially last week?

“The incursion of the U.S. Capitol struck at the very heart of our republic,” Trump says. “It angered and appalled millions of Americans across the political spectrum. I unequivocally condemn the violence that we saw last week.”

Then Trump adds these words, which might have had a calming influence had they been spoken on the day the Capitol was invaded by hundreds of irate Trump supporters:

Violence and vandalism have absolutely no place in our country and no place in our movement. Making America great again has always been about defending the rule of law, supporting the men and women of law enforcement, and upholding our nation’s most sacred traditions and values. Violence goes against everything I believe in and everything our movement stands for.

Looking forward, Trump urges everyone who participates in upcoming demonstrations on his behalf to do so peacefully. “Every American deserves to have their voice heard in a peaceful and respectful way,” he says. “That is your First Amendment right. But I cannot emphasize [enough] that there must be no violence, no lawbreaking, and no vandalism of any kind.”

Trump being Trump, he cannot resist an allusion to left-wing violence, along with criticism of “the unprecedented assault on free speech” epitomized by his own eviction from Twitter and Facebook. But he is evenhanded in his prescriptions.

“We have seen too many riots, too many mobs, too many acts of intimidation and destruction,” Trump says. “It must stop. Whether you are on the right or on the left, a Democrat or Republican, there is never a justification for violence. No excuses, no exceptions. America is a nation of laws. Those who engaged in the attacks last week will be brought to justice. Now I am asking everyone who has ever believed in our agenda to be thinking of ways to ease tensions, calm tempers, and help to promote peace in our country.”

What is needed now is for us to listen to one another, not to silence one another. All of us can choose by our actions to rise above the rancor and find common ground and shared purpose….

I am calling on all Americans to overcome the passions of the moment and join together. As one American people, let us choose to move forward united for the good of our families, our communities, and our country.

It’s a good speech, one Trump presumably did not write but nevertheless delivers with something resembling conviction. But it’s a bit late.

Just before the deadly riot last week, the same president who now wants Americans to “rise above the rancor,” “overcome the passions of the moment,” and “find common ground” was riling up thousands of devoted followers who had come to Washington, D.C., at his behest to stop President-elect Joe Biden from taking office. “They rigged an election,” he declared at a rally that began an hour before a joint session of Congress convened to affirm Biden’s victory. “All of us here today do not want to see our election victory stolen by emboldened radical-left Democrats, which is what they’re doing, and stolen by the fake news media….We will never give up. We will never concede….Our country has had enough. We will not take it anymore….We will stop the steal.”

Trump made the stakes clear. “We’re going to have somebody in there that should not be in there,” he said, “and our country will be destroyed. And we’re not going to stand for that.” He urged his supporters to “be strong” and “fight like hell” against “this egregious assault on our democracy,” then sent them to the Capitol on a hopeless mission to overturn the election results by “peacefully and patriotically” demanding that Congress keep him in office.

The results were predictable. But just yesterday, Trump was still insisting that his remarks were “totally appropriate.” And even tonight, after he was impeached mainly because of that reckless speech, he acknowledged no connection between the “rancor” he decries and the two months he spent whipping his followers into a frenzy with wild claims of a stolen election and wacky conspiracy theories.

Even after the protest turned violent, Trump took the time to slam Vice President Mike Pence on Twitter for lacking “the courage” to subvert the Constitution by unilaterally rejecting electoral votes for Biden. About 20 minutes after the riot started, Trump urged his supporters to “stay peaceful.” Half an hour later, he reiterated that message: “I am asking for everyone at the U.S. Capitol to remain peaceful. No violence! Remember, WE are the Party of Law & Order—respect the Law and our great men and women in Blue.”

Later that day, Trump recorded a one-minute video urging the protesters to “go home now,” saying “we have to have peace.” At the same time, he continued to feed the imaginary grievances that motivated the riot. “I know your pain,” he said. “I know your hurt. We had an election that was stolen from us.” He closed with this decidedly mixed message: “This was a fraudulent election, but we can’t play into the hands of these people. We have to have peace. We love you. You’re very special. You see the way others are treated that are so bad and so evil, but go home and go home in peace.”

A less petty, less vindictive, less impulsive, more rational, and more gracious man might have delivered something like tonight’s soothing remarks on the day they could have made a real difference. But with such a man in the White House, there would have been no need for them.