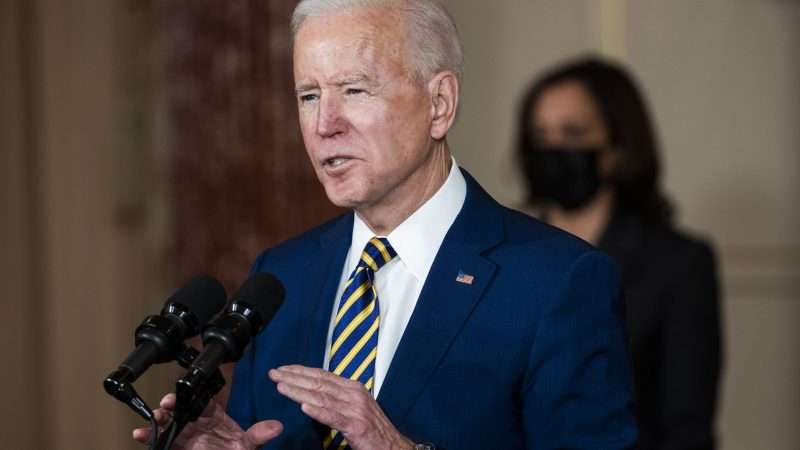 President Joe Biden on Thursday issued an executive order undoing his predecessor’s dramatic cuts to the number of refugees admitted to the United States each year.

Starting with the fiscal year that begins on October 1, the United States will accept up to 125,000 refugees annually, Biden announced during a foreign policy speech delivered at the State Department. The Trump administration had slashed the number of refugees accepted each year. This year the cap is set at just 15,000, the lowest single-year total since the Refugee Act of 1980 standardized the admission process. Reversing those cuts, and then some—the refugee cap was 110,000 in the final year of the Obama administration—was a signal of America’s “moral leadership” in the world, Biden said.

“We shined the light of liberty on oppressed people,” Biden said. “We offered safe havens for those fleeing violence or persecution. And our example pushed other nations to open wide their doors as well.”

In addition to raising the caps, the executive order Biden signed Thursday also revokes two Trump-era executive orders and one presidential memo imposing additional security vetting on would-be immigrants who applied for refugee status. The order gives the State Department 90 days to provide the White House with a report on the effectiveness of those screening procedures, as well as recommendations for which practices should remain in place when the higher refugee caps take effect in October.

While the Trump administration framed the overall reduction in refugee admissions and the enhanced security screening procedures (what Trump liked to call “extreme vetting“) as being matters of national security, they were really nativist political maneuvers meant to reduce the number of people allowed to enter the country legally.

The idea that refugees are a uniquely dangerous national security threat is simply not based in reality. Since 1975, a grand total of 20 refugees have been convicted of terrorism-related offenses in the United States—in plots that have cumulatively killed three Americans, according to research from Alex Nowrasteh, director of immigration studies for the Cato Institute, a libertarian think tank. Trump’s slashing of the overall refugee numbers also included a complete ban on admitting refugees from Syria, despite the fact that there has never been a terror attack on U.S. soil carried out by a Syrian refugee. Native-born Americans and foreigners with tourist visas are statistically far more likely to engage in terrorism on U.S. soil, if history is any guide.

Refugees are also not a threat to America’s economic success or a drain on the country’s resources. Quite the contrary: “Refugees and asylees not only contribute to the economic health of their new country but increase their economic contributions considerably over time,” David Bier, an immigration policy analyst at Cato, concluded in a 2019 review of a leaked government report that the Trump administration tried to conceal from the public.

But while Trump’s actions did little to materially improve American national security, his anti-immigrant agenda did successfully mangle the process for admitting refugees to the country. Beyond the short-term harm to individual immigrants awaiting resettlement, Trump’s reductions undermined the institutional infrastructure at the nine nonprofit agencies that work with the U.S. government to resettle refugees. More than 100 resettlement offices were closed during the Trump years.

Raising the refugee caps and abolishing the “extreme vetting” that slowed the resettlement process to a crawl are good steps toward fixing that. And Biden making a commitment to greater openness may send a signal to the rest of the world too.

“The US needs to fix its own reputation and incentivize other rich countries by welcoming refugees in greater numbers, after record lows during the Trump administration,” Hans van de Weerd, vice president of the International Rescue Committee, one of those nine resettlement agencies operating in the United States, said in a statement. In fact, van de Weerd noted, refugee resettlement slots decreased by half in the world’s wealthiest nations over the past four years.

Ultimately, the refugee resettlement caps are a great example of arbitrary executive branch rule-making that’s subject to presidential whim. The federal government will always have a role to play when it comes to immigration, of course, but setting more permanent guidelines for how America will deal with refugees should be part of any immigration reform legislation that Congress might pursue.

For now, however, Biden is right to lift those caps and begin undoing the damage that the Trump administration caused to score cheap political points at the expense of legal immigrants and America’s reputation.