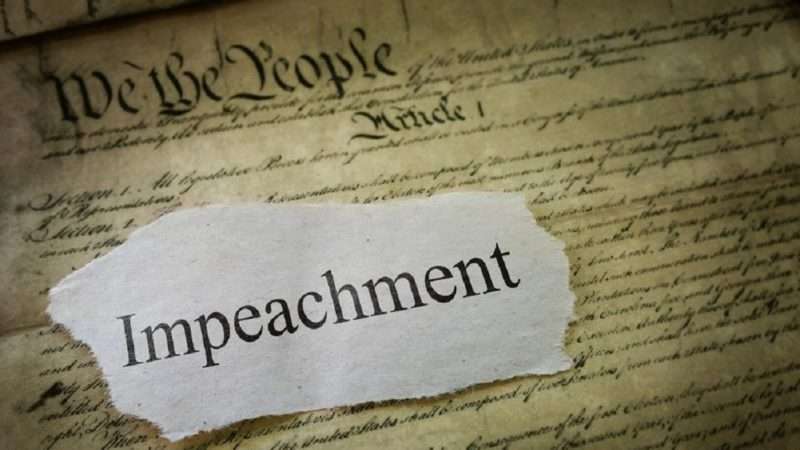 This morning, both the House impeachment managers and Donald Trump’s defense lawyers filed their respective trial briefs. The House brief is available here, and the defense brief here.

The House brief is an impressive and thorough analysis of both the facts leading up to the January 6 attack on the Capitol, and the various legal issues involved. On the former, it is worth emphasizing, as the brief does that the relevant evidence includes not just Trump’s January 6 speech to the crowd that later attacked the Capitol, but his previous history of making bogus accusations of election fraud and condoning violence by his supporters. It is the combination of all three which makes Trump culpable, and which led some of his supporters to reasonably assume that he wanted them to attack the Capitol. As the brief notes, many of the Capitol rioters have explicitly said they did what they did because that’s what they thought that’s what Trump wanted.

The House brief also effectively addresses both of the major legal defenses offered by Trump’s supporters: that a conviction would undermine freedom of speech, and that it is unconstitutional to try a former president. I have previously written about both issues at length (e.g., here, here, and here), and won’t go over them in detail in this post. To my mind, the best short analyses of these two issues are by my Volokh Conspiracy co-blogger Keith Whittington (see here and here). Keith’s writings are—deservedly—cited repeatedly in the House brief (which also includes some citations to writings by other VC writers, including a couple of my own posts).

By contrast with the House brief, the defense brief is short and mostly consists of assertions unsupported by either evidence or or legal argument. These flaws may reflect the fact that Trump’s current lawyers only took over the case yesterday, after he parted ways with his original legal team over the weekend.

The brief contains a few notable whoppers, such as the claim that “[i]nsufficient evidence exists upon which a reasonable jurist could conclude that the 45th President’s statements [about the election results] were accurate or not, and he therefore denies they were false.” This simply ignores the overwhelming evidence of rulings by numerous courts rejecting Trump’s bogus claims of election fraud, including ones authored by judges Trump himself appointed (a fact effectively summarized in the House brief).

The defense brief predictably raises both the free speech defense, and the claim that impeaching a former president is unconstitutional. But it fails to address any of the numerous flaws in these arguments pointed out by a variety of legal commentators across the political spectrum—and duly summarized in the House brief.

Trump’s lawyers’ brief also contends that the impeachment is unconstitutional because it is a “bill of attainder” (a law targeting a specific individual  for punishment). I will mostly leave this issue to those with greater relevant expertise. But I will point out that there can be no bill of attainder without punishment (usually for some sort of crime). Impeachment  and conviction inflicts no punishment, and does not deprive the target of life, liberty, or property. It is instead a mechanism for protecting the constitutional system against threats, by removing dangerous officials from office, and (as in this case) potentially barring them from holding office again in the future.

Perhaps the best argument in the defense brief is the claim that the Impeachment Article combines several different issues into one charge, in the hope  of assembling the required two-thirds supermajority to convict, from senators who may not fully agree with the charge, but do agree with parts.

I think it might have been better to include a separate count for Trump’s earlier efforts to pressure the Georgia Secretary of State into illegally overturning the election results in his state. But I don’t believe this issue should be a deal-breaker for conviction. Senators can conclude Trump is guilty of inciting the insurrection even if they don’t agree with all of the reasoning in the Article. Unlike in a criminal trial, which will often properly focus on technical details of specific charges, an impeachment vote is not a narrow legalistic process, but rather should be focused on the bottom line of whether defendant’s actions justify removal from office (in the case of a sitting official) or being barred from future office-holding.

While the House brief is clearly superior to the crude and superficial work product of the defense team, I am not naive enough to think that this will make a major difference to the outcome. Impeachment is at least as much a political process as it is a legal one, probably more so. That’s why Mitt Romney (in Trump’s first impeachment trial) is the only senator to have ever voted to convict a president of his own party. Trump’s second impeachment trial will almost certainly add to the count. But partisan bias—combined with GOP senators’ fear of retribution by Trump’s supporters within the party—seems likely to save Trump from conviction by the required 2/3 majority.

I don’t doubt, by the way, that partisan bias plays a role on the Democratic side, as well. Few politicians are immune to it. But it is notable that the Trump impeachment has gained greater bipartisan support than any other impeachment of a president (with the possible exception of the potential impeachment of Richard Nixon in 1974), and that it has been backed by numerous right-of-center legal scholars and other commentators who have little, if any, love for the Democratic Party.

At this point, there seems little likelihood of a conviction, as 45 GOP senators recently voted against tabling a motion to reject Sen. Rand Paul’s objection to the impeachment trial based on the claim that former presidents cannot be tried after they leave office. But some of those senators have indicated they are leaving their options open when it comes to the final verdict—including, significantly—minority leader Mitch McConnell. Only time will tell how many senators will vote to convict, though it is highly doubtful it will be enough to reach the necessary two-thirds majority.