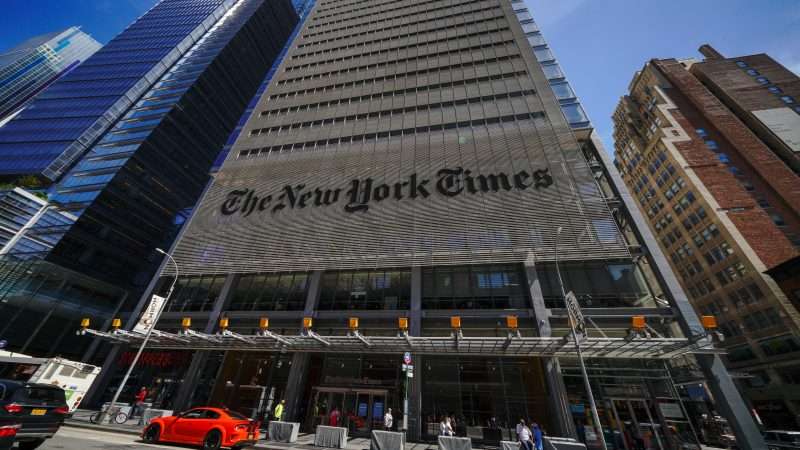 The New York Times on Friday forced out its lead pandemic reporter, 47-year newsroom veteran Donald McNeil Jr., because the Grey Lady’s management, under public pressure from more than 150 employees, decided that when it comes to speaking certain radioactive words, not only does intent not matter, any utterance is potentially a one-strike offense.

“We do not tolerate racist language regardless of intent,” Times Executive Editor Dean Baquet and Managing Editor Joe Kahn explained bluntly in a memo Friday.

McNeil, 67, went as a representative of the Times on a 2019 trip with American high school students in Peru. There, according to his farewell note to colleagues—which, tellingly, was the first time the context of his career-ending comments had ever been reported during the 8-day life cycle of this journalism-world controversy—McNeil “was asked at dinner by a student whether I thought a classmate of hers should have been suspended for a video she had made as a 12-year-old in which she used a racial slur. To understand what was in the video, I asked if she had called someone else the slur or whether she was rapping or quoting a book title. In asking the question, I used the slur itself.”

After receiving complaints back then from at least six parents or students—one of whom said “He was a racist….He used the ‘N’ word, said horrible things about black teenagers, and said white supremacy doesn’t exist”—the Times “conducted a thorough investigation and disciplined Donald for statements and language that had been inappropriate and inconsistent with our values,” according to a company statement January 28. “We found he had used bad judgment by repeating a racist slur in the context of a conversation about racist language.”

Added Baquet in an internal memo: “During the trip, he made offensive remarks, including repeating a racist word in the context of discussing an incident that involved racist language. When I first heard the story, I was outraged and expected I would fire him. I authorized an investigation and concluded his remarks were offensive and that he showed extremely poor judgment, but that it did not appear to me that his intentions were hateful or malicious. I believe that in such cases people should be told they were wrong and given another chance.”

This week, the newsroom revolted via a remarkable group letter in which more than 150 staffers at one of the country’s leading newspapers argued that word-choice intentions are “irrelevant,” because “what matters is how an act makes the victims feel.” Signees, declaring themselves “outraged and in pain” and “disrespected,” demanded a reinvestigation of the 2019 incident, an apology to the newsroom, and an organizational study into how racial biases affect editorial decisions. They also alleged that the controversy had surfaced new internal complaints about McNeil demonstrating “bias against people of color in his work and in interactions with colleagues over a period of years.”

Rather than blanch at that suggested new journalistic standard—if the paper is no longer recognizing the linguistic use-mention distinction, then all it will take to prompt a vast scrubbing of the archives are enough offended “victims” of articles like these—The New York Times Company leadership (Baquet, Publisher A.G. Sulzberger, Chief Executive Meredith Kopit Levien) responded to the letter with anguished obsequiousness.

“We welcome this input. We appreciate the spirit in which it was offered and we largely agree with the message,” they wrote. “We are determined to learn the right lessons from this incident and take concrete actions to improve our workplace culture, ensure the integrity of our journalism, and examine the way we manage behavioral problems among members of the staff.”

The writing was on the wall. And not just for Donald McNeil.

Friday also saw the resignation of Times podcast producer Andy Mills, co-creator of The Daily and producer of the initially acclaimed and then heavily criticized series Caliphate, one of whose central characters turned out to be a probable fabulist. The two personnel cases (which like all personnel cases are very difficult to assess accurately from the outside looking in), while being vastly different in underlying causes, nevertheless contain important overlap and even connective tissue.

After the Times began to distance itself away from Caliphate in December, many journalists inside and outside the newsroom began grumbling that Mills was not being punished enough, especially compared to the series’s star reporter, Rukmini Callimachi, who was demoted and subject to a lengthy internal review. There was, critics alleged, a “sexist double standard,” made all the more intolerable by a re-popularized 2018 New York magazine article about Mills’ aggressive sexual flirtations with colleagues years before at WNYC, for which he had been punished at the time.

In January, more than 20 National Public Radio affiliates signed a joint letter of complaint about The Daily and Mills, citing among a litany of complaints his workplace relationships with women.

It was this months-long controversy, much of it played out on social media, that Dean Baquet was alluding to in his initial responses to the public Donald McNeil revelations. “Some people think we have been too tolerant in disciplining high-profile journalists,” he wrote in his January 28 memo. “I also welcome that conversation. Fair treatment has to be the foundation of the diverse and equitable newsroom we are building.”

Further connecting the two cases, and perhaps even influencing what was likely an internal Times leak to The Daily Beast about a typically confidential personnel matter, is the fact that McNeil himself starred on The Daily literally the two days before the Beast story ran. Times journalists, reflecting the zeitgeist of modern newsrooms, place an exalted emphasis on the value of their “platforms,” and The Daily is among the paper’s most prestigious.

“Despite The Times’s seeming commitment to diversity and inclusion,” Times staffers wrote in their letter, “we have given a prominent platform—a critical beat covering a pandemic disproportionately affecting people of color—to someone who chose to use language that is offensive and unacceptable by any newsroom’s standards.”

Mills in his resignation letter emphasized that his decision was not over the Caliphate controversy, but the way that his past workplace behavior was being re-scrutinized and tendentiously characterized, including publicly by his own colleagues.

“The allegations on Twitter quickly escalated to the point where my actual shortcomings and past mistakes were replaced with gross exaggerations and baseless claims,” he maintained. “Several people have even alleged that I am a predator and a dangerous threat to my colleagues. I have been transformed into a symbol of larger societal evils. As a journalist, it has been especially discouraging and upsetting to see fellow journalists make such claims or retweet them…. As the pressure of this online campaign has grown to encompass some staffers of The Times, it has led to a climate where, even though I still love the mission of this important institution, I feel it is in the best interest of both myself and my team that I leave the company at this time.”

“Originally, I thought the context in which I used this ugly word could be defended. I now realize that it cannot,” he wrote. “It is deeply offensive and hurtful. The fact that I even thought that I could defend it itself showed extraordinarily bad judgment. For that I apologize….My lapse of judgment has hurt my colleagues in Science, the hundreds of people who trusted me to work with them closely during this pandemic, the team at ‘The Daily’ that turned to me during this frightening year, and the whole institution, which put its confidence in me and expected better.”

If McNeil thought his prostration would engender grace from his workplace executioners, he was likely mistaken, going by this article from NPR media reporter David Folkenflik:

In each case, however, the actions of Times news leaders appeared to baffle many of their colleagues. For several who spoke to NPR, it was the fact these circumstances were allowed to fester for so long. For others, the reversals defied common sense.

In the words of one knowledgeable Times newsroom staffer, who spoke on condition of anonymity, “two boils were lanced today.”

These developments have import far beyond midtown Manhattan. The collapse of the use-mention distinction with certain words (evident in the Times‘ own pre-firing headline about how McNeil had “used” a “racial slur”), combined with a zero-tolerance approach toward offenders who haven’t caught up to the new rules, has been a growing phenomenon in and outside of media for several years now. As I wrote in a 2019 piece,

John Schnatter, the outspoken conservative founder of pizza chain Papa John’s, was forced to resign as chairman of his own company in 2018 after vividly describing acts of racist violence during a role-playing exercise that was designed to increase workplace sensitivity. Netflix fired Chief Communications Officer Jonathan Friedland that year not for being a racist, but by using the n-word in a company meeting about what words to avoid. A 23-year-old Chipotle employee named Dominique Moran was fired in late 2018 after a video went viral of her telling two black customers, “You gotta pay ’cause you never have money when you come in.” (It turned out later that one of the men indeed specialized in making videos of himself dining and dashing from restaurants, after which Chipotle offered Moran her job back. She declined.)

You can get suspended from university jobs for even saying words that sound like a racial slur, but are not. Placing that level of consequence-heavy fraughtness on speech does not encourage productive conversations about negative collective demonization of certain groups based on their immutable characteristics.

Scores of professional journalists have asserted publicly as a matter of plain fact that Donald McNeil is a “racist,” one of the most grave accusations in contemporary life. This is the extent of his bosses’ generosity toward his career, after their abrupt, pressure-induced reversal of disciplinary policy: “Donald joined The Times in 1976 and has done much good reporting over four decades. But we feel that this is the next right step.”

I have almost never used the N-word in my private life, let alone in my public work. (It is not hard to find video of me on television wincing at its mention.) I do not seethe with even one drop of resentment that it would probably be frowned upon if I walked down the street shouting N.W.A. lyrics. But on those few occasions that I have written the word, it was not to “use a racial slur,” it was to highlight the too-common evil of racism in my childhood environment, and to attempt to have an honest conversation about where we are today.

It is gratifying to work for a publication that not only values free speech, but considers the subject a core coverage area. What’s truly regretful, even alarming, is that that approach has become the exception, not the rule, in modern journalism.