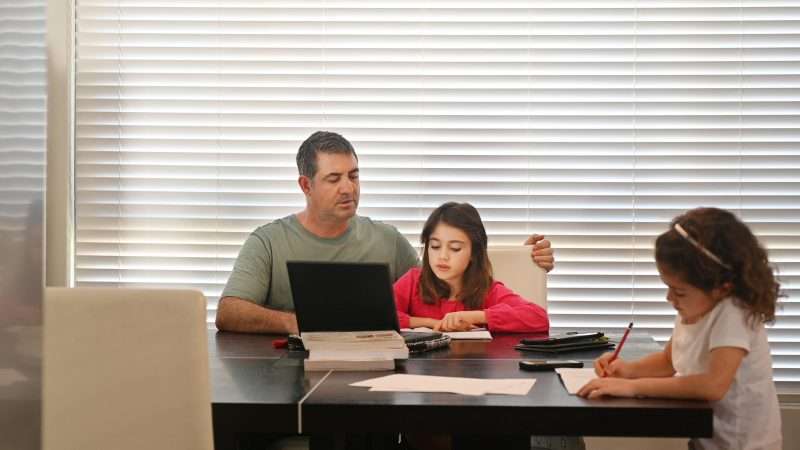 Opponents of school choice have been touting a poll that they claim shows enthusiasm for homeschooling waning as pandemic-forced experiments in DIY education drag on. But a closer look at the numbers reveals nothing of the sort. Instead, it appears that even after months of an unplanned plunge into kitchen-counter education, the proportion of people saying they feel more positive about the practice has remained a majority, while opposition shrinks.

“One other interesting thing in this poll,” self-described labor campaigner and public education activist Kombiz Lavasany tweeted on February 3. “Right-wing education types kept saying how this would be a renaissance for homeschooling vs public schools. Not so much.”

The tweet included a screenshot from a January survey stating that “strong favorability of homeschooling has dropped considerably among school parents this month to the lowest it has been since the start of the pandemic.” Conducted by Morning Consult for Edchoice on a monthly basis, the survey tracks sentiment over time with regard to the educational landscape. Asked in January how their opinions on homeschooling changed as a result of the coronavirus, 18 percent of respondents said they were “much more favorable,” down from a high of 43 percent back in July, when school was on summer break for most families.

But that’s only part of the story. For January, another 40 percent of respondents said they were “somewhat more favorable” toward homeschooling as a result of their coronavirus experience. By contrast, 10 percent said they felt “somewhat less favorable” and 9 percent were “much less favorable” toward homeschooling (22 percent had no opinion). That’s 58 percent to 19 percent—or a 3:1 ratio—of increased to decreased favorability for DIY education.

EdChoice and Morning Consult first asked about feelings toward pandemic-forced homeschooling last May after families had tried their hand at it for a few months. In that first survey, 59 percent of respondents said they felt more favorable (26 percent “much” and 33 percent “somewhat”) while 29 percent were less favorable toward the practice (12 percent “much” and 17 percent “somewhat”).

In the intervening months, total increased favorability hit its peak—74 percent—in July, when few families were actually educating their children. Once parents were back to the hard work of teaching, favorability maintained a solid majority even as unfavorable views declined from the early days. The numbers suggest that even when forced into a hands-on education option that they may never have selected of their own accord, far more people gained a positive impression of the practice than acquired a negative one. Experience dampened initial enthusiasm, but it hasn’t turned people off.

If you see that your homeschooled kids are doing better than their friends and relations in government schools, it makes sense that you’d feel pretty well-disposed toward the option.

That doesn’t mean that homeschooling is for everybody. There are a lot of families for whom DIY education is a less-than-ideal choice. Teaching kids may play havoc with the already-busy schedules of two-income families and it can be an overwhelming experience for those who never seriously considered the option before it was thrust upon them. It can also just run counter to personal inclinations. One-size-fits-some options are a bad fit for others.

But few if any choice advocates argue that everybody should homeschool or adopt any particular education approach. Instead, they say that people should be able to choose how their kids learn.

“Are there cases where families seek alternatives to a traditional public school based on their experience there?” asks EdChoice’s Jennifer Wagner. “Yes. But they’re making that choice because of their experience in that school. Parents aren’t trying to topple an institution; they just want to do what’s best for their kids.”

By contrast, people like Kombiz Lavasany seem heavily invested in supporting specific government institutions at the expense of any other means of providing education. Any sign of preference for, or satisfaction with, homeschooling, charter schools, or private schools is seen as an attack on those favored institutions—never mind the kids who are, theoretically, the point of all of this.

The larger public, though, continues to support the idea of educating children through whatever means people desire, not through specific institutions.

“Fully 65% of K-12 parents back school choice, including 66% of public-school parents,” according to a January poll conducted for the American Federation for Children. “Support for public charters schools and ‘school vouchers that allow low- and middle-class families to send their child to any school they deem best’ increased this year; 77% of voters support public charter schools and 74% back school vouchers with this framing.”

A September RealClear Opinion Research survey found that 15 percent of respondents would pick homeschooling if they could select any type of K-12 school. Another 32 percent would pick district schools, 29 percent preferred private schools, 13 percent would choose charters, and 11 percent named virtual education (which can be offered by any of the above).

Surveys also find that homeschooling has surged during the pandemic, with roughly 10 percent of students now educated through various DIY approaches, up from an estimated 3.3 percent in 2016.

That doesn’t suggest that homeschooling is a deadly enemy to government schools. Clearly, it’s just one alternative that families want to be able to consider instead of being trapped in government schools and vilified if they choose something different.

But the pandemic is demonstrating that real-life experience with home-based education favorably impresses far more people than it turns off. And public education activists might better spend their time stepping up their game instead of wasting energy by attacking competing approaches that have proven their value.