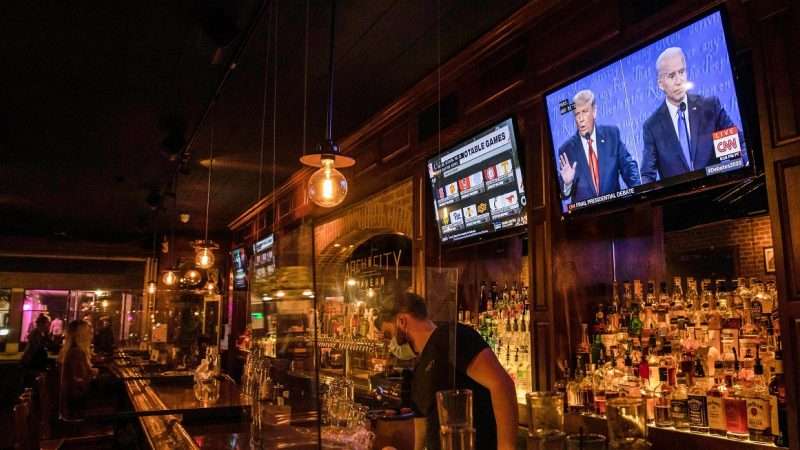 Is there anything that politics can’t ruin? The answer, it appears, is a resounding “no” as partisan conflict creeps into all areas of American life. Our political affiliations, researchers say, obstruct friendships, influence our purchases, affect the positions we take on seemingly apolitical matters, and limit our job choices. As a result, many people are poorer, lonelier, and less healthy than they would otherwise be.

“Political polarization is having far-reaching impacts on American life, harming consumer welfare and creating challenges for people ranging from elected officials and policymakers to corporate executives and marketers,” according to a new paper in the Journal of Public Policy & Marketing by researchers from Arizona State University, the University of Wyoming, and four other U.S. universities.

The researchers find that people’s chosen political identities become self-reinforcing through associations with groups with shared beliefs. Our associations can even create a “group-specific shared reality” that makes it harder to relate to those with opposing views.

“[A]s society has become increasingly polarized, politicians’ objectives diverge and their animosity toward the opposition grows, thereby reducing opportunity for compromise,” the researchers warn. “Partisan incivility is a major reason for failed dialogue: Uncivil exchanges result in disagreement and greater polarization regardless of the evidence presented.”

People’s partisan identities influence the range of people with whom they are willing to have relationships, the brands they purchase, and the jobs they take. In an era of public health concerns, people often choose positions on matters such as vaccines or mask-wearing not based on a rational assessment of the issues, but on a plug-and-play adoption of their tribe’s stances. This sort of politicized decision-making can stand in the way of rational choices and healthy connections.

“With political positions influencing decisions, people may sacrifice wages, lose out on jobs, make suboptimal purchases and disregard opportunities to save,” the researchers note. “For example, research has found that employees accept lower wages to work for politically like-minded entities, and people may select higher-priced products or ones that offer less-functional value.”

“Polarization has the potential to prevent neighbors or colleagues of opposing parties from developing friendships. This ultimately deprives individuals of intellectual diversity, among other things,” they add.

The finding that everything is becoming politicized builds on a growing mountain of data. Even before political tensions hit their current fever pitch, a 2018 survey found that “Nearly two-thirds (64 percent) of consumers around the world will buy or boycott a brand solely because of its position on a social or political issue” (the number for the U.S. was 59 percent). In 2020, a separate survey reported that “83% of Millennials find it important for the companies they buy from to align with their values.”

That means that the price and utility of products and services are actually secondary considerations for many people, taking a back seat to companies’ public posturing. Many business executives have risen to the challenge, advocating positions on gun control, immigration, and race relations, whether because they sense an opening to promote their opinions, or just a marketing opportunity.

“These leaders hope that their political activism will help shape public opinion and potentially lead to lasting change, while simultaneously cementing their reputations as moral leaders and change agents,” Christine Moorman wrote for Forbes. She noted that, as of 2018, most marketing experts considered this a bad move with the potential for alienating both customers and employees.

Since then, the trend has only intensified — especially after former President Trump’s challenge to election results and in the wake of the January 6 riot at the Capitol. Recent events “accelerate a broader movement in business to address social and political issues” according to a January 15 piece in the Wall Street Journal.

This politicization of all things great and small is what another researcher referred to last summer as the “oil spill” model of mass opinion polarization.

“[W]hat if polarization is less like a fence getting taller over time and more like an oil spill that spreads from its source to gradually taint more and more previously ‘apolitical’ attitudes, opinions, and preferences?” Pennsylvania State University’s Daniel DellaPosta asked in a study published in June 2020 in American Sociological Review. “[E]ven many initially apolitical lifestyle characteristics, from musical taste to belief in astrology, can become politicized as signals for deeper beliefs and preferences—a tendency most saliently captured in the popular image of the ‘latte liberal’.”

Americans, then, are increasingly making decisions along tribal political lines, potentially depriving themselves of rewarding friendships, better-paying jobs, well-reasoned judgments, and optimal goods and services. But by choosing beverages, beans, sports equipment, and employment according to tribal affiliation, they are also losing points of shared interest with people who disagree with them. The people they see in their neighborhoods, at concerts, and in their chosen restaurants likely share their views on hot-button issues, because those who disagree live, party, and shop elsewhere. That further reduces the opportunity for connections across partisan boundaries.

Worse, when the political tribes are so divorced from one another in terms of preferences and lifestyles, it becomes easier to target the “enemy” by going after their ways of life. With conservatives largely living in rural areas and exurbs, and liberals confining themselves to cities and suburbs, and the groupings having shrinking overlap in terms of their interests, it’s pretty easy to hurt opponents by targeting pastimes and brands for boycotts, regulatory action, or legal restrictions.

“I think we’re all aware of how political polarization has affected our elections and system of government, but the impacts go far beyond the political arena,” comments Dave Sprott, dean of the University of Wyoming’s College of Business and one of the authors of the Journal of Public Policy & Marketing paper. “Ultimately, polarization harms mental and physical health, financial welfare, relationships and societal interests through its impact on psychology, marketing and public policy outcomes.”

There is nothing we can or should do about people’s lifestyle choices, but we can give them less reason to fight. Making politics less important through reducing the ability of government to affect our lives has the potential to make us all healthier and happier.