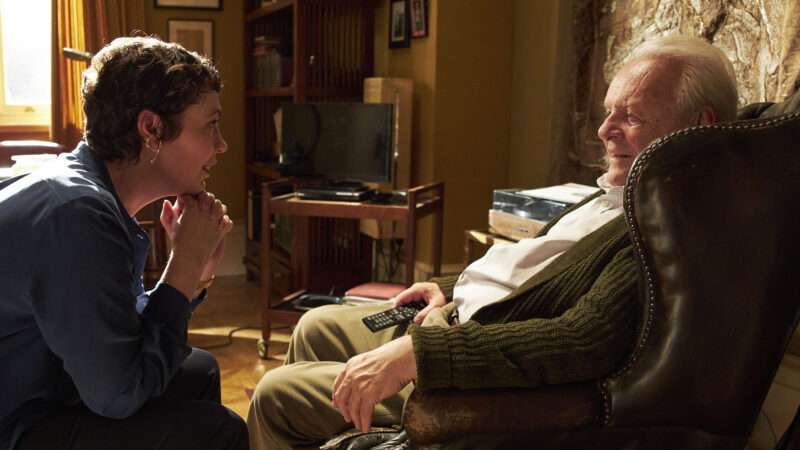 An old man named Anthony (Anthony Hopkins) has just heard an unfamiliar sound coming from somewhere in his large London apartment. In the living room, he finds a stranger (Mark Gattis) sitting in a chair reading a paper. This man says he is the husband of Anthony’s middle-aged daughter, Anne (Olivia Colman), and that this is actually his apartment. Anthony’s world tilts. “There’s something funny going on,” he says.

Not funny ha-ha, unfortunately. Just moments ago, Anne, who is actually a divorcée, told Anthony she was moving to Paris. “I’ve met someone,” she says. “The rats are leaving the ship,” Anthony replies, with the flashing hostility that has become an abrasive feature of his crumbling personality. “You’re abandoning me,” he says.

The Father is the first film by French playwright Florian Zeller, adapted from his 2012 play in collaboration with the British screenwriter Christopher Hampton. The movie’s muted power lies not just in showing us a man sinking into dementia, but in actually creating a semblance of the garbled world of that affliction so that we feel the same helpless confusion that Anthony does—for instance, when he encounters his daughter’s husband again and sees that he is now a different man (played by Rufus Sewell). There’s also
a lot of agita about the nurses Anne keeps bringing in to look after her fading dad—he doesn’t like any of them. But if Anne is to wrench back control of her life, he’ll have to let go of her. Either that, or die. (He’s 80 years old, only three years younger than Hopkins himself.)

Padding through the apartment one day, Anthony overhears Anne and Paul discussing him. “We have to find another arrangement,” Paul says, in long-simmering frustration. “A nursing home. He’s ill.” Later, approaching Anthony directly, Paul asks, “How long do you intend to hang around?” Observing Anthony awkwardly struggling just to put on a sweater, we realize that, as Paul fears, he could be here for a
relatively long time.

In a 54-year film career, appearing in everything from Spielberg and Woody Allen pictures to Marvel and Michael Bay movies, Anthony Hopkins can only rarely have been as penetratingly effective as he is here. As his character sinks ever deeper into disorientation, Hopkins allows us to experience exactly how that must feel. At some points he erupts into an alarming bonhomie, dancing and singing; at others, he seems almost uninhabited, his eyes dropping to the floor in search of something that’s no longer there. It’s an exhilarating feat of incarnation.

So it’s a great Anthony Hopkins movie—not the first, though, is it? What makes the film such an indelible experience is that everyone else involved in its making (that would include the wonderful Imogen Poots and Olivia Williams) is also working at the top of their talent. Director Zeller maintains a meditative mood through the frankly theatrical use of scaled blue lighting as well as the music—heard through Anthony’s bedroom headphones—of Purcell, Bizet, and Bellini. Especially praiseworthy is Colman, who’s responsible for the movie’s melancholy warmth. She’s dealing with a character that might easily have devolved into cliché misery porn, but she seems uninterested in milking tears. Instead, she makes us see that Anne isn’t just slowly losing her father, she’s also losing any chance of happiness in her own life—a double sadness. It’s nobody’s fault, of course.

(The Father is now playing in theatres in Los Angeles and New York. It will open wider on March 12th, and will be available online, on-demand, on March 26th.)