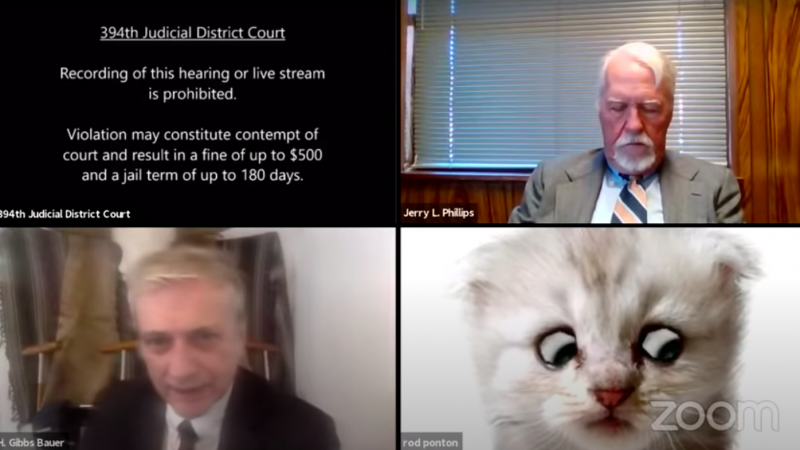 On Tuesday, the bulk of the Twittersphere came together, with partisan divisions falling to the wayside, if only for a few brief moments in time. The source: a Zoom video recording of trial proceedings in Texas’s 394th Judicial District Court, in which Presidio County attorney Rod Ponton appeared on-screen in the form of a wide-eyed kitten. His child, it seemed, had gotten ahold of the filter settings.

“I can…I can see that,” replied Judge Roy Ferguson.

So far, the clip has racked up more than 3.6 million views on YouTube and over 26.9 million on Twitter. “If I can make the country chuckle for a moment in these difficult times they’re going through,” he told The New York Times in an interview, “I’m happy to let them do that at my expense.”

Such a light moment is a nice break in bleak times. It can also make us forget the enormous power people like Ponton wield, and the capacity they have to use that power for very bad things.

For example, a Reason investigation in 2014 and subsequent documentary reported that, as a prosecutor, Ponton leveraged the gears of the federal government in a yearslong effort to level bogus drug charges against a woman in Alpine, Texas, ultimately succeeding at destroying her business.

The target, Ilana Lipsen, was his alleged former lover; she says she had one sexual encounter with him when she was an 18-year-old college student in the early 2000s. (Ponton, who is now 69, would have been in his early 50s.) Lipsen told Reason that, in the aftermath, she was “disgusted with herself,” and although she noticed odd behavior from Ponton afterward—she recounted him driving by her house, for example—she cut ties.

Until 2012, that is, when she would have no choice but to reconnect with Ponton. Nearly a decade later, Lipsen had opened her own store, The Purple Zone, which sold smoking supplies. Anthony Fisher, who reported this story in 2014, described what happened next:

In March 2012, “10-12 men came in, SWAT team style” to the Purple Zone, Lipsen recalls. They told her she was not under arrest, but cuffed her and threw her in the back of a police van while they searched her store, seized personal property including computers, a cell phone, and hard drives. They also took numerous packets of what Lipsen sells as potpourri in the incense section of the store, adorned with the colorful brand names such as “Dr. Feelgood,” ”Scooby Snax” and ”Bomb! Marley.”

According to Ponton, then the district attorney in Brewster County, Texas, Lipsen’s potpourri qualified as “spice”—synthetic cannabinoids. The only problem: Her products were legal, as state-sponsored lab tests would confirm over and over.

Eight months later, Ponton had her arrested anyway. He also arrested her mother, who did not work at the store, charging both with “possession and distribution of a controlled substance”—a felony. Ponton cited a little-known rule on “analogues,” which, as Fisher wrote, “are chemicals that are not prohibited but are similar enough to controlled substances that they become illegal depending on who interprets the data.” Lipsen had the products tested in private labs and likewise had proof that the substances weren’t illegal.

That didn’t matter to Ponton. The Drug Enforcement Agency (DEA) would go on to make several undercover purchases over the next few years, and Ponton would continue to beg the state for testing money, apparently hoping that a lab result would finally yield the proof he needed to substantiate the criminal charges he wanted to bring against her.

He was denied the funding. So he got creative, setting his sights on Project Synergy Phase II, a national day of DEA raids on May 7, 2014, organized to track down synthetic drug pushers who were allegedly using their earnings to fund Middle Eastern terrorist groups.

Lipsen and her smoke shop would again be one of the targets. “Led by the DEA and armed with a Brewster County search warrant (which Ponton had requested),” wrote Fisher, “officers from the Border Patrol, the Department of Homeland Security, the Brewster County Sheriff’s Office, and the Alpine PD broke down the front door of The Purple Zone with their weapons drawn, turned all the security cameras against the wall, and tore the place to pieces.”

Again, agents found no illegal substances. But they did find ammunition that Lipsen had received as a gift; Ponton excavated another obscure law and charged her with “receiving ammunition while under indictment.” Lipsen’s sister Arielle was also arrested after arguing with an agent onsite, who threw her to the ground as he took her into custody. She sustained an injury on her neck, which was documented via photograph by Tom Cochran, a man who owned a nearby business and came to the scene as the raid was underway.

Lipsen sat in jail on the ammunition charge, unable to post bond. But not long after, she received a potential way out. At the behest of the U.S. attorney prosecuting the case, the federal magistrate noted that the state would uncage her if she took care of a few things:

“Will request Tom Cochran retract his blog on Facebook. Will provide a letter of apology to both local newspapers in Alpine, TX, advising DEA had a legitimate reason to execute a warrant at her business. Will advise newspaper A warrant was not executed at her business because she was Jewish, owned Arabian horses, is of Turkish decent or because she visited Chinese websites. Will advise media (KWest 9 news) that her sister, Arrielle Lipsen, was not beaten by agents carrying/using a M16 rifle, and her sister instigated/assaulted agents.”

Reason‘s Brian Doherty covered the development in-depth. “While Lipsen’s lawyer was not available for comment this morning, other criminal defense lawyers told me this is a strangely abusive bail demand,” he wrote in May 2014. “Mark Kuby, who is also a talk show host in New York, considers it a ‘Texas-sized’ violation of rights, ‘as unprecedented as it is unconstitutional’ since bail demands properly should be restricted to furthering two government interests: protecting the community from possible criminal action by defendant, and to make sure the defendant appears for trial.”

Lipsen signed it. Meanwhile, Ponton was busy across town intimidating the local press: They reported on the issue in a way that was too partial to the accused, he felt, in that it included her account of events alongside the government’s. The paper, the Alpine Avalanche, caved and published a subsequent piece that was much more deferential to the state.

Four months later, Lipsen pleaded guilty to first-degree felony manufacture, delivery, and possession of a controlled substance—though no substance the government found was illegal in Texas at the time of the raid. As a part of the deal, the state dropped the charges against her family members, along with the ammunition charge Lipsen faced from the second raid. She was given a deferred adjudication, meaning she has to keep a clean record for 10 years or face 5 years to life in prison. She sold her shop and left town.

As for Ponton, he’s still at it. His 15 minutes of fame came as he prepared to argue a civil forfeiture case—a helpful reminder that his career is no laughing matter.