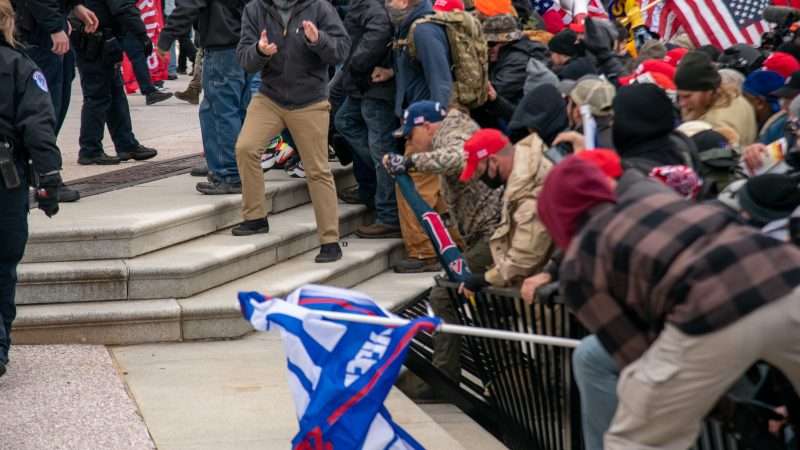 Former President Donald Trump’s lawyers flesh out their impeachment defenses in a 78-page pretrial memorandum they filed yesterday. They argue that the Constitution does not allow the Senate to try a former president, a process that began today. They also deny that Trump “incit[ed] violence against the Government of the United States” when he delivered an inflammatory speech to his followers shortly before hundreds of them attacked the U.S. Capitol on January 6.

The first argument is plausible, although hotly contested. But the second argument misconstrues the impeachment as a criminal charge, subject to the limits that the First Amendment imposes in such cases.

Impeachment of former officials was a well-established practice in England and preconstitutional America. Given those precedents, Trump’s lawyers think it is telling that the Framers did not explicitly authorize late impeachments. “The Framers could have explicitly included a provision allowing for the impeachment of a former President, but they did not,” the memorandum says. “The text is also doubly clear given the clarity of available models in some of the United States themselves that did allow for late impeachments to take place.”

The Framers’ failure to explicitly address late impeachments, of course, also can be construed the other way. If they wanted to rule out what they knew was a common practice, they could have done so.

The text is not actually clear at all, which is why legal scholars are still debating this issue 233 years after the Constitution was ratified. But Trump’s lawyers think it is plain that a trial of a former president does not qualify as a trial of “the President.” If the Senate were in fact trying “the President,” they say, Chief Justice John Roberts would be presiding, which he is not. They also note that “remov[al] from Office” is mandatory upon conviction, while disqualification from future federal office is optional.

“The Senate is being asked to do something patently ridiculous: try a private citizen in a process that is designed to remove him from an office that he no longer holds,” Trump’s lawyers say. “Congress’ power to impose penalties upon conviction of impeachment is limited to removal, and (not or) disqualification.” When removal is no longer possible, they argue, a Senate trial is not only unauthorized but amounts to an unconstitutional bill of attainder targeting a private citizen. They cite court decisions that interpreted similar language in state constitutions as precluding impeachment of former officials.

One telling way in which Trump’s lawyers part with Kalt is their handling of Federalist No. 39, where James Madison says “the President of the United States is impeachable at any time during his continuance in office.” Trump’s lawyers read that statement as ruling out impeachment of a former president. But as Kalt notes, “Madison was not speaking of the limits of the federal impeachment power; rather, he was speaking of its expansion. Unlike certain states where the governor cannot be impeached at all or can only be impeached after he leaves, Madison explained, the President can be impeached while he is in office.”

Trump’s lawyers also misleadingly cite Kalt while attributing this quotation to “one legal scholar”: “A half-grown boy reads in a newspaper that the President occupies the White House; if he would understand from that that all Ex-Presidents are in it together, he would be considered a very unpromising lad.” That remark does appear in Kalt’s article, but it is not his assessment. It is a quotation from a lawyer who defended former Secretary of War William Belknap during his 1876 impeachment trial. Kalt, by contrast, thinks the weight of the historical evidence supports the constitutionality of impeaching (or trying) former federal officials.

Trump’s lawyers concede that a majority of the House thought Belknap could still be impeached on corruption charges even after he resigned, while a majority of the Senate thought a trial was still appropriate. But as the memorandum notes, the minority of senators who disagreed was large enough to ensure Belknap’s acquittal. Trump’s lawyers also note that the House did not pursue impeachment after President Richard Nixon resigned, although that decision does not necessarily show that members of Congress thought doing so would have been unconstitutional.

In a 33-page reply filed today, the House members charged with prosecuting Trump say “scholars from across the political spectrum, including renowned conservative constitutional scholars, have recognized that the Constitution empowers the Senate to convict and disqualify officials who commit misconduct late in their terms and therefore can realistically only be tried after leaving office.” The House managers laid out the reasons for that conclusion in greater detail when they filed their trial memorandum last week.

The scholars cited by the prosecution argue that ruling out late impeachments would frustrate the goals of accountability and deterrence by leaving Congress with no recourse against a president who commits serious misconduct toward the end of his term or who resigns (as Nixon did) after his misconduct comes to light. The House managers also note that the Senate has “the sole Power to try all Impeachments.” Since “the House undisputedly had jurisdiction to impeach President Trump while he was still President,” they say, a Senate trial is clearly authorized.

This issue is not as clear as many of Trump’s defenders and critics suggest. Kalt, who argues that late impeachments are constitutional, nevertheless calls it “a close and unsettled question.” George Washington University law professor Jonathan Turley, who is more skeptical of late impeachments, likewise describes the issue as “a close question upon which people of good faith can disagree.”

There is less evidence of good faith in Trump’s argument that he cannot be impeached for persistently promoting the fantasy that he actually won the presidential election by a landslide, culminating in his fiery pre-riot address, because his expression of that demonstrably false opinion was protected by the First Amendment. His lawyers note that Trump never advocated violence and in fact urged his supporters to “peacefully and patriotically” protest the congressional certification of Joe Biden’s victory. “His statements cannot and could not reasonably be interpreted as a call to immediate violence or a call for a violent overthrow of the United States government,” they say. “President Trump’s speech at the January 6, 2021, event fell well within the norms of political speech that is protected by the First Amendment.”

I think that’s true. It seems clear Trump’s speech would not qualify as incitement to riot under federal law. It also seems clear that he did not exceed the bounds of constitutionally protected speech described by the Supreme Court in the 1969 case Brandenburg v. Ohio, which held that even advocacy of lawbreaking is protected by the First Amendment unless it is not only “likely” to incite “imminent lawless action” but also “directed” at that goal.

Even if the First Amendment does not allow the government to criminally prosecute Trump for inciting the Capitol riot, however, that does not mean Congress cannot impeach him, not only for the reckless speech he gave that day but for his monthslong campaign to overturn the election results. That campaign went well beyond court challenges, extending to arguably illegal conduct such as pressuring state officials and Vice President Mike Pence to stop Biden from taking office.

Whether or not Trump violated any criminal statutes, he abused his power and exercised his influence over his supporters in a way that undermined democracy and predictably (although perhaps unintentionally) led to violence. That is the main thrust of his impeachment, and it does not require proof that Trump did anything that was technically illegal.

As for Trump’s claim that the First Amendment bars his impeachment, George Mason law professor Ilya Somin notes that “high government officials don’t have a First Amendment right to be protected from firing based on their political views.” That principle, he says, “applies to presidents facing impeachment no less than other officials.”

The House managers likewise cite the verdict of “nearly 150 First Amendment lawyers and constitutional scholars,” who called Trump’s First Amendment defense “legally frivolous.” The reply brief argues that “the First Amendment has no application in an impeachment proceeding, which does not seek to punish unlawful speech, but instead to protect the Nation from a President who violated his oath of office and abused the public trust.”