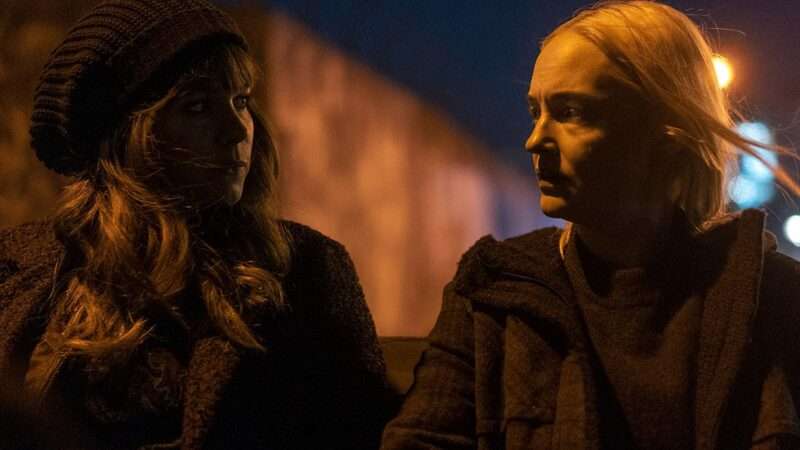 A decade ago, when the detective series The Killing (an American remake of a Danish TV show) and the child-vampire film Let the Right One In (a Swedish film based on a Swedish book) introduced a new Nordic spin on an old genre, film noir, it was an exciting innovation. Cloaking hardboiled fiction, cynical characters, and somber existential heroes not just in midnight-blurred alleys but in the very climate implied a darkness without escape, a perpetual state of moral ambiguity.

But as streaming services have exponentially expanded the volume and reach of Nordic noir television, its limits have been increasingly obvious. And most of them are apparent in Cold Courage, a 2020 British-Finnish political conspiracy thriller that’s about to make its U.S. debut on AMC’s new AMC+ streaming service.

It’s got two strong female characters with uncertain backgrounds who find themselves in the murky center of a tangle of not-necessarily-related troubles: sadomasochistic sex trafficking; missing persons; deranged exes; and, most importantly, dark doings in the populist campaign of an anti-immigration candidate for British prime minister.

Both women—Mari (Pihla Vitaala, Deadwind) and Lia (Sofia Pekkari, The Sandhamn Murders)—are Finn expatriates working in London after fleeing their country to extricate themselves from family problems. Beyond that, the similarities are few. Mari comes from wealth (her father once owned a gold mine) and has used it help fund a secret organization of uncertain aims (“We…fix … things,” explains one member) that calls itself The Studio.

Lia, on the other hand, has always lived a hardscrabble existence, most recently as a graphic artist for a little lefty magazine that sounds a bit like The Nation, except poorer. To make rent, she’s been doing some freelance design for the party of demagogic politician Arthur Fried (John Simm, Doctor Who). Slogan: “Putting the great back in Great Britain.” She sees no contradiction in her actions—”I don’t care anything about politics”—but knows enough to keep the political work silent.

Until, that is, Mari literally bumps into her in the street, steals her cell phone, and kinda blackmails and kinda bribes Lia into volunteering to work in Fried’s campaign office and pass along whatever interesting gossip she hears. Lia agrees in return for help finding a missing old friend from her brief new-to-London career as a hooker. But the price, inevitably, is much higher than she expected. She soon slippery-slides into planting surveillance cameras, picking locks, installing phone taps and laying honey traps.

That plot is fairly interesting; its implications perhaps even more so. What, really, is The Studio, which says it fixes things but will never be mistaken for Habitat for Humanity? And who, really, is Mari, whose genteel concerns for Lia do not long conceal her capacity for wielding a stiletto? Initiating a game she calls “Secrets and Lies” at a party of Mari’s magazine colleagues, she offers up instant and detailed assessments of some of the players—”You were sexually abused by your father when you were a child”—that are as accurate as they are appalling. Retorts an enraged Mari: “Who made you God?” But she doesn’t break off her relationship with The Studio.

The twists and turns of Cold Courage are intriguing, but following them isn’t always easy, and the problems will be aggravatingly familiar to anybody who’s watched much Nordic noir. Subplots multiply like Finnish fleas. The perpetually underlit scenes in London’s winter fog—amplified by the characters’ inexplicable urges for midnight strolls down inky harbor-side streets—often make it difficult to tell who’s doing what to whom. What they’re saying is even more of a mystery; though Cold Courage is shot mostly in English, the cast speaks it with half a dozen or more soupy European accents.

Though I’ll admit the mushy Babel of tongues produced some amusing moments. For instance, there’s a scene in which guys I suppose were cops were interrogating a large man who I suppose was a prison inmate.  After a long exchange of murgle-burgle-blahs and mmph-hmmmp-phmfs, the large man boomed out, with crystal clarity: “I want a blow job from Marilyn Monroe!”  Whether his wish was fulfilled, I don’t know. That London fog is thick.