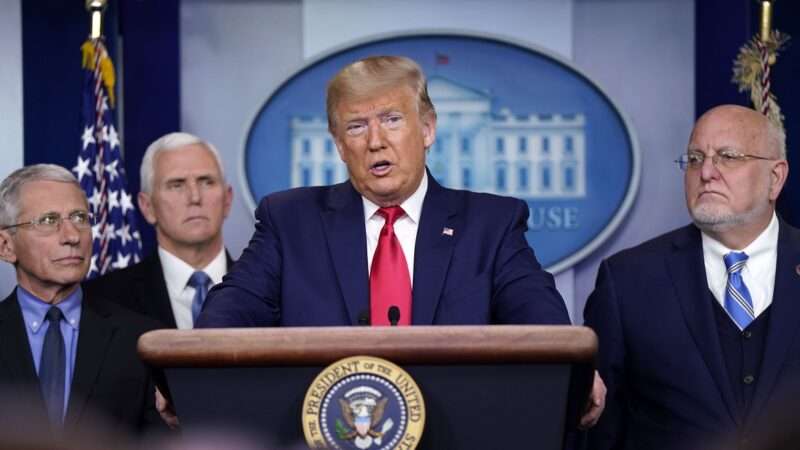 A contagious virus is a matter of public health in its narrower and better definition. It’s not about whether people eat well, exercise, avoid smoking, or otherwise pursue personal health. In a pandemic, our habits have spillover effects—externalities—that can bring catastrophic results for others.

Economists know that negative externalities often get discounted by people who inflict them but don’t suffer from them. That’s why, even for a classical liberal, public health might be a matter for state intervention: Individuals should internalize the costs they inflict on others, and if they don’t, it may be acceptable to compel them to.

Thus classical liberal accounts of state action have often supported the idea that the state should act to prevent contagious disease. And the details? These, purportedly, are a matter for medical science to figure out, and it should go without saying that balancing and judgment will be necessary along the way to preserve a decent quality of life. After all, we’re trying to minimize externalities in aggregate, not just trying to minimize the one externality that we’re newly worried about.

Unfortunately, much action has been well characterized by the old saw, “Something must be done. This is something. We must do it.” The Twitter account @YearCovid, which is doing a one-year retrospective of news about the pandemic, has just helpfully reminded me that at this time last year, the U.K. government was banning private advertisements that urged individuals to buy and use cloth face masks.

That was a terrible idea. But it was something, and something had to be done. The U.K. wasn’t alone; “don’t wear a mask” was also the government-issued message in the U.S., at least at first. And long after it ceased being the message, the fact that it had been the message continued to serve as an excuse to go about life as normal. Which, I hate to say it, was not a good idea either.

The bungling didn’t end there. The popularity of lockdowns in the West seems to have been inspired by China’s initial efforts to contain and eliminate the virus. Those efforts were futile, and we now know that they were almost certainly doomed to fail. The only countries that have kept the virus out have been islands—which China is not—and they’ve only been able to do so for a limited time.

The fallback strategy of “two weeks to flatten the curve” at best bought a little time while easing the public into lockdowns, and business and school closures, of indefinite length. We were told that a test-and-trace system was in the works, though I doubt it ever really had a chance either. Delays in supplying effective, government-approved tests hurt from the start, and frequent asymptomatic transmission made contact tracing a fool’s errand.

A lot of state action has had little or no net benefit. Some of it has made effective private action much harder; some, as we have seen, has put well-intentioned people in a really awkward dilemma: Do we prefer disease or servitude? And some of it has been deadly—including unconscionable foot-dragging on vaccine approval while over a thousand people a day were dying. Perhaps, in an even better world than ours, the government would just let people medicate as they think best.

From early in the spring of last year, I have held onto two basic ideas: First, the pandemic is real, and it calls for a real response. And second, the most important part of that response, the part that will matter when it’s all over, will be the part that we did voluntarily. I am both pleased and appalled to say I think those views held up pretty well, and next time I hope we can let the more successful part of society, the private sector, take the lead more often.