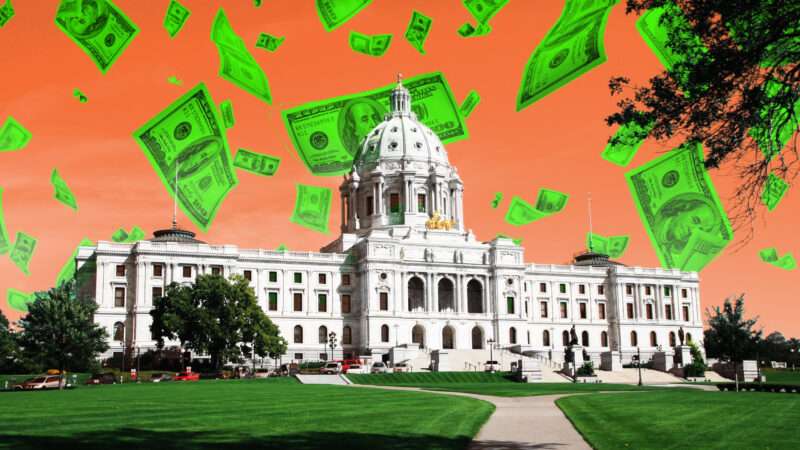 Buried within the $1.9 trillion emergency spending bill that Congress sent to President Joe Biden’s desk on Wednesday is a provision that could effectively block states from cutting taxes if they accept federal bailout dollars.

That provision, added to the bill by the Senate last week, could put a halt to several states’ plans to cut taxes this year as a way to stimulate economic growth following the COVID-19 pandemic. Depending on how the text is interpreted, the measure could also make it illegal for states to create new tax credit programs like the ones that have become a popular mechanism for expanding school choice. Critics say this expansion of federal control over state policymaking is murky at best, and potentially unconstitutional.

First, the basics: The COVID-19 relief-bill-that-isn’t-really-a-relief-bill contains $350 billion earmarked for state governments, local governments, and Native American tribes. That money is supposed to help governments fill temporary budget holes created by the pandemic—even though the funding vastly exceeds actual state and local budget shortfalls, as Reason’s Christian Britschi has previously reported. States are in such non-dire straits, in fact, that about $150 billion of the state aid distributed as part of last year’s Coronavirus Aid, Relief, and Economic Security (CARES) Act hasn’t even been spent yet.

Since the federal government is giving states money that they don’t need, there are two things state lawmakers can do: Use the federal money to grow government spending or pass that extra cash along to taxpayers by lowering their tax burdens.

However, the Senate inserted language in the American Rescue Plan expressly telling states that they “shall not use the funds provided…to either directly or indirectly offset a reduction in the net tax revenue,” or do anything that “reduces any tax (by providing for a reduction in a rate, a rebate, a deduction, a credit, or otherwise) or delays the imposition of any tax or tax increase.”

That same section of the bill also bans states from depositing the federal bailout into their public pension funds. That’s probably a good idea, but it’s pretty ironic considering that the American Rescue Plan also contains a completely indefensible bailout of some private-sector pension funds run by labor unions.

The bill doesn’t categorically prohibit any changes to state tax policies, but “adjudicating what counts as indirect use to facilitate a tax cut is messy,” Jared Walczak, vice president of state projects at The Tax Foundation, a nonpartisan tax policy think tank, tells Reason. “States will receive federal aid regardless of their budget situation, and many potential uses of that funding could theoretically offset the need to spend state dollars. If that is enough to block a tax cut, states could find themselves barred from cutting taxes even though they could have done so without taking a dollar in state aid.”

And because the language also forbids states from using the federal bailout to forgo a potential tax increase, it may prohibit using the aid to repair state-level unemployment insurance trusts funds that have been dented by pandemic-related unemployment. Instead, states like Maryland might have to go through with a 600 percent hike in unemployment taxes despite getting a windfall from the federal government.

But the biggest losers are states like Mississippi, New Hampshire, and West Virginia that were planning tax cuts next year and now might have to worry about the feds dragging them into court if they do. “This is terrible, this is absolutely terrible,” West Virginia Gov. Jim Justice, a Republican, said Tuesday.

Do states have a choice? They could simply return the bailout dollars to the federal government unspent, of course, and then no restrictions on their use would apply.

Or there might be a legal remedy. The Wall Street Journal editorial board suggests that the provision could violate the Supreme Court’s “anti-commandeering” doctrine that prohibits the federal government from dictating policies to states—that was a bit of an issue in the pandemic’s early days too, you might recall, but for very different reasons.

Even if this bill passes constitutional muster, however, it’s clearly a coercive provision that ties the hands of state policymakers. If Congress doesn’t want states to use bailout dollars for certain purposes, it could more easily accomplish that goal by simply not bailing out states that don’t need the help.