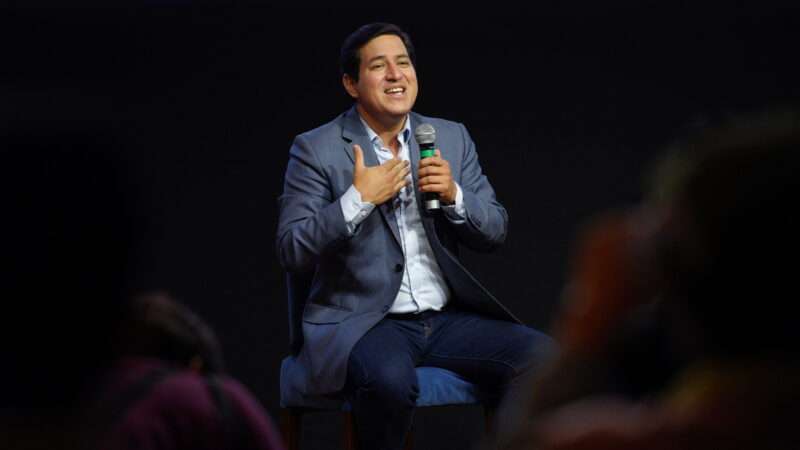 In 2018, Venezuela’s dictator, Nicolás Maduro, got rid of many of Hugo Chávez’s currency and price controls, which were largely responsible for massive food shortages and 2,000 percent annual inflation levels. Now, as Reuters reports, over 50 percent of all transactions for basic goods in the country’s major cities are carried out in U.S. dollars or euros, a figure that rises to 90 percent in cities near the Colombian border. Steve Hanke, professor of applied economics at Johns Hopkins University, argues that all transactions carried out in local bolivares are calculated in terms of the dollar, which has become Venezuela’s unofficial unit of account. In the midst of hyperinflation, Venezuela’s de facto dollarization has provided some monetary stability and a degree of safety for citizens’ savings.

Meanwhile, a socialist politician in another Andean nation wants to lead his country in the opposite direction. In Ecuador, where the U.S. dollar has been the official currency since the year 2000, presidential candidate Andrés Arauz, who won the first round of voting with 32 percent of the vote last month and awaits a runoff on April 7, is a longtime critic of dollarization and has been outspoken about the need to dismantle it. Officially, his opponent has not been named due to an extremely close result for second place amid electoral chaos and accusations of voter fraud. But if Arauz prevails next month, the future of money in Ecuador will be at stake.

Ecuador’s dollarization was the response to an economic crisis that bred political mayhem. Between 1998 and 2007, seven presidents served less than a full term; three of them were ousted from the government by either the legislature or the military. In 2000, then-President Gustavo Noboa decided to fully dollarize the economy as annual inflation levels reached 96 percent. The sucre, the official currency since the 19th century, had lost 115 percent of its value against the dollar between 1998 and 1999. Dollarization, however, was hardly an undisputed alternative; one of Noboa’s predecessors, Abdalá Bucaram, fell victim to a coup when he tried to dollarize, an unpopular option at the time, with 69 percent of the population opposed according to one report.

At the time, one of the most vociferous critics of dollarization was a U.S.-trained economics professor named Rafael Correa. Adopting the dollar, he argued, meant renouncing national sovereignty and the ability to stabilize the economy through monetary policy in times of crisis. In 2007, Correa was elected president. He governed until 2017 under the banner of socialism, having changed the constitution so as to enable his own reelection. Like his ally, Hugo Chávez, he railed against the private sector and took a number of heavy-handed measures to silence critical news media.

While in power, Correa repeatedly referred to dollarization as a costly mistake and touted the importance of a national currency as a tool of “social coordination.” Correa’s main monetary novelty, however, was a government-controlled electronic payment scheme, another part of his legacy that his successor quickly dismantled by removing its control from the central bank. Crucially, Correa never tried overtly to get rid of the dollar, which remains Ecuador’s currency and enjoys outstanding levels of popularity.

Last January, after 21 years of low inflation and stable levels of purchasing power, 88.7 percent of respondents told polling firm Cedatos that Ecuador should not dedollarize in spite of the economic downturn. In fact, holding a currency that local politicians can’t devalue by printing bills as if they were bingo cards—à la Chávez or Robert Mugabe—is the one thing that protects regular Ecuadorians from the inevitable excesses of 21st century socialism. As Ecuadorian economist Dora Ampuero said during Correa’s last term, “dollarization saved us from ending up like Venezuela.”

According to Hanke, Correa was “clever enough as a politician to know that if he got rid of the dollar, that would have been the end of his government.” However, Luis Espinosa Goded, professor of economics at Universidad San Francisco de Quito, argues that Correa’s digital payment system, initially a means to pay government employees, was an underhanded attempt to create an alternative currency. Correa’s government even tried to give away the new money, offering businesses value-added tax (VAT) refunds to adopt it, and spent millions on advertising campaigns for the scheme. The attempt failed after five years, with the equivalent of only $15 million of the new money in circulation according to Espinosa Goded. However, Arauz, whom The Economist calls Correa’s proxy, says that he will set up a similar payment system if he wins.

This concerns strong money advocates, who recall that Arauz, a University of Michigan-trained economist, attacked dollarization as late as last year, even though he now promises to strengthen it. In April 2020, Arauz published a blog post with a detailed plan of how to dedollarize the economy. It contained not only Correa’s trick of using “a means of national payments for national transactions,” but also “increasing internal liquidity, including that of the central bank.” While campaigning, Arauz has said he will spend $8 billion of the central bank’s international reserves, which he assures belong to the state, and he intends to send a $1,000 check to one million families. But laying hands on the central bank’s high-quality foreign assets, besides compromising its liabilities on the balance sheet, is the equivalent of a raid on citizens’ deposits, says Espinosa Goded. Ecuador’s reserves include commercial bank balances as well as those of local governments.

On his blog, Arauz also mentions the need to impose capital controls through a fixed quota set by the central bank and a 27 percent “currency exit” tax, which will be charged to anyone who tries to move money out of Ecuador. According to Hanke, implementing Arauz’s proposal would mean “that dollars held by Ecuadorians would not be freely convertible, since conversion would carry a massive cost.” This measure, which is likely to exert considerable downward pressure on all asset prices, makes Arauz “much more dangerous than people realize,” moreso than even Correa when he was in power. Hanke recalls that Friedrich Hayek, an advocate of competition among currencies, called capital controls “the final suppression of all means of escape” from state tyranny, “not merely for the rich but for everybody.”

If Arauz gains power, any attempt to dedollarize Ecuador likely would face popular resistance, not only because of the dollar’s massive approval in the country, but also because such a move runs counter to 21st century socialism’s latest tendencies, even in Venezuela. The 36-year-old Arauz, however, appears to be less pragmatic and more ideologically driven than the power-obsessed Correa, whose political future hangs in the balance.

Lenín Moreno, the current president and Correa’s former vice president, turned on his old boss over the corrupt practices of Odebrecht, a Brazilian infrastructure company that ran a bribes-for-government-contracts scheme across Latin America. As a result of the scandal, Jorge Glas, who served as vice president under both Correa and Moreno, was sentenced in 2017 for receiving over USD $13 million in bribes.

Moreno also stated publicly that Correa had left him a nearly bankrupt country, with a bloated public sector and USD $60 billion of debt, which amounted to 60 percent of GDP in 2018. He proceeded to take austerity measures, cutting the government payroll—even getting rid of 43 state agencies, among them ministries—and sharply reducing gasoline subsidies. Once COVID-19 hit Ecuador in 2020, the country failed to pay its sovereign debt for the third time since 1999.

Correa, who has called Moreno the greatest traitor in Ecuadorian history and—perhaps even worse from his perspective—a neoliberal, was himself convicted of corruption last year, as he was preparing his fourth presidential run from Belgium, where he lives in exile. Arauz says that, if he were to win, Correa’s sentence would be overturned. Unbiased judges, he claims, suddenly would be free of government pressure against the former president, who, presumably, would be able to run for office again in 2025. The question is whether the U.S. dollar will remain Ecuador’s currency by then.

Beyond destructive government interference, the future of dollarization in Latin America depends, of course, on the dollar itself. By increasing the M2 money supply by 26 percent in 2020 alone, the Federal Reserve has behaved much like the Latin American central banks that dollarization proponents often criticize, even if the Fed’s monetary expansion remains minuscule compared to that of Venezuela or Argentina, countries with no foreign demand for their currencies. However, Espinosa Goded argues that, in the worst of cases, fully dollarized countries such as Ecuador and Panama—and even semidollarized ones like Peru and Guatemala—are well prepared for a potential downfall of the dollar as the global reserve currency, especially since its citizens are accustomed to using foreign money. Switching to any other type of currency or cryptocurrency that eventually topples the dollar—or the entire fiat-based system—would be relatively simple, he says.

The debate is certainly not new; individuals have always found ways to protect their assets from government-induced inflation and currency devaluations. As Spanish scholar Juan de Mariana wrote in the 17th century, it was with good reason that, when crowning a monarch, the people of Aragon made their new king swear not to debase their money. Ecuadorians would do well to heed this lesson.