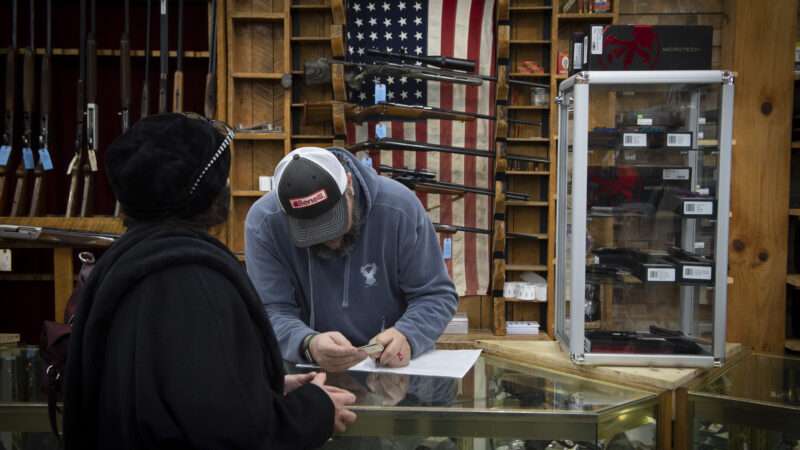 The House of Representatives yesterday approved two bills that would require background checks for nearly all firearm transfers and dramatically increase the amount of time allowed to complete those checks. Both changes would impose substantial new burdens on law-abiding gun owners and unjustly deny people their Second Amendment rights without doing much of anything to frustrate criminals.

H.R. 8, a.k.a the Bipartisan Background Checks Act of 2021, would make it a felony, punishable by up to five years in prison, to complete a gun transfer unless it involves a federally licensed dealer. Under current law, such dealers are required to conduct background checks to see if would-be buyers are legally disqualified from owning guns. This bill would extend that requirement to private transfers, except for “loan[s] or “bona fide gift[s]” between close relatives when “the transferor has no reason to believe that the transferee” falls into a prohibited category.

The bill, which was supported by 219 Democrats and eight Republicans, aims to “ensure [that] individuals prohibited from gun purchase or possession are not able to obtain firearms.” But it assuredly would not do that, since criminals already evade background checks by buying guns on the black market or through straw purchasers, and the people who supply them are unlikely to be deterred by an additional layer of illegality.

To the extent that a uniform background check requirement actually blocks sales, it will mainly affect buyers who pose no threat to public safety. Federal law prohibits gun possession by absurdly broad categories of people, including anyone with a felony record, no matter the nature of the offense or how long ago it happened; anyone who has ever undergone involuntary psychiatric treatment, whether or not he was ever deemed a danger to others; and cannabis consumers, even in states that have legalized marijuana.

A 2004 report from the Justice Department’s Office of the Inspector General gives you a sense of the gun buyers who tend to be flagged by background checks. The report looked at what happens when people who buy guns later turn out to be disqualified.

Under current law, the FBI has three business days to process background checks—which makes the name of that program, the National Instant Criminal Background Check System (NICS), something of a misnomer. After three business days, the dealer is allowed to complete the sale even without a response. The Bureau of Alcohol, Tobacco, Firearms, and Explosives (ATF) is therefore sometimes charged with retrieving guns from people who took possession of them before it was discovered that they were not allowed to own them. The inspector general found that “ATF special agents did not consider most of the prohibited persons who had obtained guns to be dangerous and therefore did not consider it a priority to retrieve the firearm promptly.”

If these people are not actually dangerous, you might wonder, why were they stripped of their Second Amendment rights to begin with? Even if all gun owners complied with the inconvenient and expensive requirement that they enlist a federally licensed dealer whenever they sell their firearms (a highly doubtful proposition, given the experience in states with similar rules), the main effect would be to compound the injustice of denying people who have never demonstrated any violent tendencies the right to armed self-defense.

H.R. 1446, a.k.a. the Enhanced Background Checks Act of 2021, is just as poorly targeted. The bill, which was supported by 217 Democrats and two Republicans, would more than triple the amount of time allowed for a background check, from three to 10 business days. In practice, that means even legally qualified buyers could have to wait nearly two weeks—possibly longer, depending on holidays and other restrictions on government hours—before taking possession of a gun. For someone who urgently needs a gun for self-defense—say, a woman afraid of an abusive ex-boyfriend or ex-husband—that delay might prove lethal.

“The ‘Ensuring SAFE-T Act’ makes sure the government cannot drag its heels in processing NICS checks,” Clyde said in a press release. “I saw first-hand during the pandemic how the closure of state government offices across the country easily infringed upon our right to keep and bear arms. With these offices closed, or purported closed, three business days can turn into weeks or even months before a firearm transfer is completed. Second Amendment rights do not pause for the whims of bureaucrats no matter the circumstances. The ‘Ensuring SAFE-T Act’ will make sure no law-abiding U.S. citizen will be denied their right to keep and bear arms just because a government office isn’t open.”

Politicians who support expanding and reinforcing the background check system, including President Joe Biden, describe those proposals as “commonsense gun law reforms.” But that view assumes the current system is fair and reasonable, meaning that more of the same has to count as an improvement. That premise deserves more scrutiny than it usually gets.