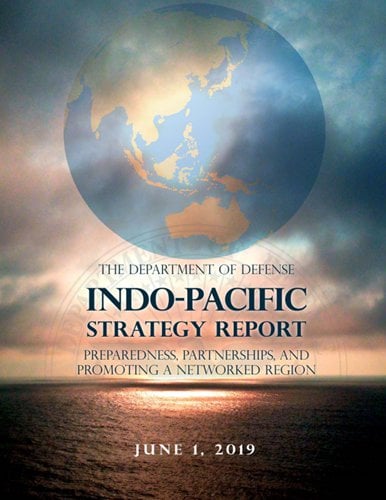 A year has passed since the Department of Defense released the Indo-Pacific Strategy Report (IPSR); however, we still lack future visions surrounding how best to truly earn the hearts and minds of our allies and partners in the Indo-Pacific community. In the long run, America needs to institutionally convince the community that it is the endgame defender of the regionally shared common values from threats imposed by any revisionist, malign, and rogue states’ national interests.

The framework for the IPSR was explicated in the former Secretary of Defense Patrick Shanahan’s keynote speech during the 2019 Shangri-La security summit. Simply put, the IPSR could be understood as being a neorealist version of the Obama administration’s ‘Pivot to Asia’  rhetoric. It reasserts America’s leadership role to safeguard regionally shared principles of “respect for sovereignty and independence of all nations,” “free, fair, and reciprocal trade,” “peaceful resolution of disputes,” and “adherence to international rules and norms” through neorealist visions’ preparedness, strategic partnerships, and promotion of a networked region. Strategically speaking, the IPSR is innovative to the extent that it inclusively extends the strategic geopolitical boundary of the region from Asia-Pacific to India-Pacific to reflect the changing strategic geopolitical landscape of the region. Nevertheless, it is more or less a protraction of the deterrence theory-based power through strength logic of balancing regional security order through minimalist reinforcement of America’s traditional hub-and-spoke-centered architecture. The latter aspect could be best exonerated as minilateralist alliance management efforts to efficiently strengthen the credibility of America’s deterrence capability against the declared antagonists’ increasing instances of breaching the rules of the game in the region. However, such an immoderately hawkish stance casts an implication on critics that America’s minilateralist management of its hub-and-spoke architecture is widening the threat perception gap between America’s pursuit of hard-hedge anti-China containment and middle/small power allies/partners’ pursuit of a soft-hedge strategy against China. Furthermore, its less-prioritized view of regional multilateralism underestimates the increasingly multidimensional nature of today’s landscape of strategic warfare that rather demands skillful peace through diplomacy, full spectrum diplomacy strategies.

For many ASEAN member countries, the IPSR signals a paradigmatic shift from prosperity to security, which might peripheralize their ASEAN centrality vision and revive the Cold War Hamlet enigma of tight-roping between ‘bandwagoning’ or balancing strategies. These concerns are apprehending not only ASEAN member countries but also the members of the Quadrilateral Security Dialogue excluding America: Australia, India, and Japan. The four allies’ diplomatic/political willingness to hard-hedge against China is questionable due to the countries’ diverging national priorities. For instance, Japan’s growing thaw with China since the escalation of the U.S.-China trade war, the surfaced reality revealing the intensification of the country’s economic dependency on China over the last decade, implies that it is burdensome for Japan to adopt a political stance in favor of America’s radical policy shift to hard-hedging against China. Similarly, Australia’s establishment of the National Foundation for Australia-China Relations, an attempt to offset the fallouts from the U.S.-China trade war, alludes that the fallouts outweigh the country’s risk perception of China’s existential threats. For India, the IPSR’s sketch identification of the country’s security role in the region misleads the country to understand the IPSR as a complementary initiative to its regional economic policy, titled Act East.

Despite the widening threat perception gap between the Indo-Pacific community and America, the relegated importance of regional multilateralism under the Trump administration’s minilateralist pursuit of the America First doctrine has fostered a contingency-based, transactional, and top-down diplomatic culture that prioritizes practical, yet malign/revisionist partisan pursuit of national interests over sustainable regional norms or institutional mechanisms. The 2019 political rift between South Korean and Japanese elites that led to the Moon administration’s suspension of GISOMIA(General Security of Military Information Agreement) is a good example of how the spillover effects of Trumpism can boomerang to burden America. Since President Trump’s inauguration, both the Abe and Moon administrations have emulated Trumpism for their malign partisan maneuvering of the rift. Whereas the Abe administration has abused it to consolidate its right-wing nationalist supporter base, the Moon administration did the same for its left-wing nationalist supporter base. This diplomatic botch for America-led trilateral security cooperation in Northeast Asia reveals the limits of the minilateralist hub-and-spoke alliance portfolio management.

Amidst the post-INF arms race climate, which beclouds the Indo-Pacific regional security order with uncertainty, adherents of deterrence theory often abuse the controversial Thucydides’ Trap as a good excuse to argue in favor of the restoration of the Cold War certainty. Their so-called ‘peace through strength’ emphasis, however, seems to disregard one of the most important Cold War lessons, in that the Soviet Union would have walked away from the negotiation table if NATO’s dual-track approach failed to successfully calibrate the risk perception gap between America, its European allies and, eventually, the Soviet Union. Given the absence of a collective security community like NATO in the Indo-Pacific, America needs an alternative form of alliance portfolio management that is viable in the long run. Such a strategy, on the one hand, ought to be instrumental for risk perception calibration between America and its allies so that we can come up with the positive creation of peaceful resolution strategies in the escalatory phases of U.S.-China conflicts. Conversely, it should also be normatively preparatory to gradually set the cornerstone conditions for the establishment of a NATO-like value-sharing security community in the region. The historical animosity and the tradition of need-based diplomatic gathering in the Indo-Pacific cannot simply be managed by Trumpist minilateralism. In order to better strategize the risk management of future security dilemmas/conflicts, America rather needs to accommodate the fluid network of what Victor Cha calls “Complex patchworks” or, indeed, bilateral, trilateral, and plurilateral institutions that connect America, China, and small/middle-power allies/partners.

Loading...
"Not by might, nor by power, but by my spirit, saith the Lord of hosts." Zechariah 4:6
BEFORE IT'S NEWS ON TELEGRAM
GET THE TELEGRAM APP - https://telegram.org/ JOIN OUR CHANNEL - https://t.me/BeforeitsNews
Read it..
BEFORE IT'S NEWS
SIGN UP FOR OUR NEWSLETTER
Today's Top Stories
Ghislaine Maxwell’s List Became Unsealed Yesterday—Look at the Democrats & Republicans Connected to Jeffrey Epstein!
Action Bulletin: Prepare for All-Out War Against the Luciferians; Prepare to Remove All Governors & Mayors Who Are China Puppets Engaged in Treason, DNC Pedophile Rings to be Exposed +Videos
Robert David Steele: New Video on JFK Jr. Joining President Trump in Dallas on 17 October; Flynn, Durham
Warning EMP Test Underway! Massive East Coast Power Outages!
Trump Apparently Wanted to Sell Puerto Rico
What Just Happened?! Last 24 Hours Changes Everything! The Good, the Bad & the Ugly of Covid19!
The 72 Hour Red Flag Before New World Order! 2020 Martial Law Exposed
Inexpensive, Accessible Device Provides Visual Proof that Masks Block Droplets
Red Alert! There’s a Plan to Siege The White House Starting Next Month and I Intend To Expose It!
Americans Rise up in Huge Numbers to Protest Democrats in Seattle!! The Backlash Is in Full Effect! - Must Video
Loading...
Featured
Alert: Marxist Group Planning A Political Coup In November In Preparation to Forcibly Remove A Victorious President Trump From Office
Who Is Behind Immigration And Multiculturalism? Had Enough Yet White People? Great Eye Opening Video!
The Truth Is In The Numbers Hidden In Plain Sight! People Love Their Servitude - Don't Be A Slave To The System! Great Videos Shaking My Head!
50 Million Americans May Die From COVID-19 Vaccine - Dr. Judy A. Mikovits. Shocking Video.
Wake Up! The Dollar Is Being Destroyed By Design!
Economic Collapse: $14 Trillion Dollar Household Debt Will Devastate Americans Personal Finances!! - Must See Video
Trump Rushed Off Conference Podium by Secret Service After Shots Fired at Suspect Near White House via Daboo77
X22Report: The World Is Watching, They Never Thought She Would Lose, Now They All Lose! - Must Video
Democrat Ruined Chicago Implodes as Rioting & Looting Erupt Throughout Far-Left City! - Must Video
X22Report: Central Banks Are Now on the Losing Side, Tactical Economic Move - Great Video
Loading...
Top Global
Beirut Suffers Devastating 9/11-Level Terrorist Attack—Who Did it and Why?
Israel Wants To Help - Beirut Blast - Take The B.I.S Crypto. Great Video By Brendon O’Connell
Aussie Cops Grab Young Girl With Exemption by the Throat for Not Wearing a Mask, Cowards Need Backup
Lebanon’s Prime Minister & Entire Cabinet Resign After Deadly Blast in Beirut (Must See Videos)
Welcome to the Machine - It's Time to Wake Up! Via Shaking My Head Productions
Bank Runs Spreading Rapidly as Bankruptcy & Bad Loans Abound in the World's Largest Banking Sector! - Must Video
HD Footage of Beirut Explosion! See the Devastating Effect of Mini Atomic Blast!! - Must See Video
Exposing the Gates Foundation in Africa: #EXPOSEBILLGATES
NTEB Prophecy News Podcast: The Entire World Is Experiencing Bill Gates Fatigue and That’s Exactly How the Global Elites Want It
The “Smoking Gun” Has Been Found!
Loading...
Top Alternative
EXPLOIT WEAKNESS: Silver Falling – BUY, BUY, BUY!
Pedophiles Now Control America – No Child is Safe from Medical Kidnapping
Another Frontline Doctor Speaks Out! Speaks Truths on Covid-19 Meds! - Great Video
With 194 BILLION Masks and Gloves Used Monthly, New Wave of Pollution Hits Oceans and Beaches
WATCH: The 2020 Coronavirus Cup
Israel Wants To Help - Beirut Blast - Take The B.I.S Crypto. Great Video By Brendon O’Connell
Tesla Model S Shows 5-Star Safety Rating in Scary 18-Wheeler Accident
Giant Swamp Rats Invade North Texas Park
Creepy Looking Lesbian Mayor Oversees Chaos in Chicago: Bridges Raised to Prevent Gun-Toting Looters Getting Downtown
‘I Am a Product of a Child Molester; Do I Deserve to Ne Loved?’ RT Speaks to Victims of Horrific Berlin Pedophile Abuse Scandal