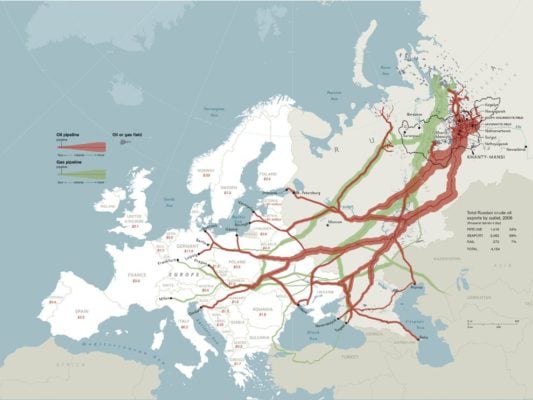 Russia has some of the largest natural gas and oil reserves in Europe. The future of European development may rest on Russia’s energy supply to the heart of the continent. MAP BY VIRGINIA W. MASON, NATIONAL GEOGRAPHIC

Many Western countries decided to put themselves in a poor strategic defensive position when they decided to push technologies that were not yet refined for their energy needs, while depending on countries and regions of the world where energy and human rights abuses sometimes went hand in hand. Europe is currently struggling to find alternative energy sources so they can move their internal economies and the well being of their citizens off Russian oil and gas. This is being done while some leaders are still failing to embrace the reality that gave Vladimir Putin the leverage to act while still being funded by Western Europeans and their allies.

While many economies have tried to move away from their dependence on Russian Oil, many have only done so partially, or will only be able to make such a maneuver over a few months or even years. The inability for oil producing allies of the West not mired in their own human rights issues and their own refugee crises to act have been hampered by the same policy decisions that is currently fuelling Russian tank and missile production. The issue of a lacking infrastructure to integrate North American oil and gas into European ports needs to be given the same level of precedence that is given to supporting Ukraine, as without this displacement, we are funding Russia’s tanks and artillery with our energy needs. Without a clear and realistic acknowledgment of the strategic value of oil and gas in addressing the crisis in Ukraine, the war will be greatly funded by their Euros, Dollars and Pound Sterling.

The approach that has been made was that the West has given funds and an ethical hall pass to countries that fuel human rights abuses with their revenues from oil. While this might displace Russian oil, it will not displace human rights atrocities. These atrocities will just change their location in the world, still being subject to our catalysts. While the resistance to using oil and gas from stable nations means it is being red taped out of existence in our communities, it also means that the refugee crisis currently taking shape in Ukraine will just occur in another part of the world. It guarantees that another aggressive Authoritarian will use their oil revenues to attack innocent civilians, although we have known for years that this is already occurring.

The history of resource conflicts is the history of war. One of the catalysts that lead Japan to entering the Second World War was the lack of natural resources held by the islands of Japan. Japan’s subsequent invasion of mainland China and eventual assault on European supported nations in the region at the time was partly done to secure added wealth and resources. The notable Battle of Stalingrad during the Second World War was over a small city named after a tyrant that was a valuable transport point for resources from the Caucasus, needed by both the Soviets and Germans if their were to continue fighting towards victory in Eastern Europe. While oil and gas is not the only catalyst for conflict, it is often one of the main elements that people need to survive and thrive at that time, and for much of the current era as well. We can see this in the recent past during drug conflicts in Mexico. When it became difficult to transport narcotics over the border, cartels and interested individuals took to tapping oil pipelines. Shortening the supply of a needed resource is the catalyst for conflict, in many cases they are related to resources that fuel, heat and feed our communities. Unfortunately, we still use and require oil and gas, even in 2022.

We know what must be done, because we are not much different than our parents and grandparents nor are we better or more capable than those that came before us. The evolution of technology is shared by all, and clean and cheap energy has been sought since the time the first steam engines pushed trains across the continent and windmills ground wheat and corn to feed the ever growing human expansion on Earth. What was known back then is that the rights and civility of people must come first, and that achievement can only be sought with justice and freedom for all.