The Tesla Model Y has snagged five-star crash safety ratings from the National Highway Transportation Safety Administration in all categories and subcategories.

With Tesla holding five-star ratings for its other three currently-produced vehicles, the Model Y had a tall task ahead of itself. However, the compact SUV from Tesla kept the tradition of five-star ratings alive by capturing the perfect grade in Frontal Crash, Side Crash, and Rollover assessments from the NHTSA.

Safety has always been a focus of Tesla’s, and the company has highlighted its reputation for well-above-average collision ratings ever since the Model S rolled out in 2012. One of the most interesting things about Tesla’s commitment to safety is that after the company has captured so many top safety awards and ratings, it still looks for ways to make cars safer through engineering and design improvements. 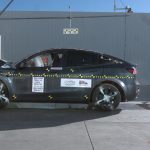 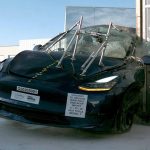 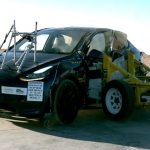 The Model Y was a marvel of modern manufacturing in many ways. Tesla has focused in on manufacturing efficiencies to help scale production of its vehicles through the past few years, and one of the most obvious ways is through a casting machine that the company is utilizing to reduce the number of parts in the vehicle’s chassis.

CEO Elon Musk detailed the casting machine’s importance in an interview with Ryan McCaffrey of the Ride the Lightning podcast.

“When we get the big casting machine, it’ll go from 70 parts to 1 with a significant reduction in capital expenditure on all the robots to put those parts together.”

The reduction in parts not only decreases the time of manufacturing and eliminates unnecessary parts from the vehicle’s build. It also improves the structural integrity of the car overall. In Sandy Munro’s teardown of the Model Y last year, the automotive industry veteran showed that Tesla added a series of welding improvements, foam reinforcements, and an “aluminum crush plate” to the Model Y in a bid to move its already impressive safety rating forward.

The crush plate was what impressed Munro the most because of its ability to save owners perhaps hundreds of dollars in the event of an accident. “If I hit a pole, it will cost me a few bucks, but it won’t cost me the whole damn car,” Munro joked.

Even after the vehicle had already proven its safety with the performance of the three crash tests, the NHTSA also commended the Model Y for outfitting all of the “Recommended Safety Technologies,” which include Forward Collision Warning, Lane Departure Warning, and Automatic Emergency Braking. Tesla is one of only two companies to fulfill the NHTSA’s wish for all automakers to outfit vehicles with AEB systems to prevent crashes or reduce their severity. The other is Volvo.

The full Model Y crash test video from the NHTSA is available below, thanks to RealSafeCars on YouTube.