True to Elon Musk’s words back in November, Tesla has now launched a collectible Tesla Tequila lightning bottle on its official shops in Europe and China. Dubbed as the Tesla Decanter, the hand-blown bottle could be another highly sought collectible from the electric car maker.

Tesla launched its Tesla Tequila in early November 2020. Priced at $250 per bottle, the alcoholic beverage, which was packaged in a lightning-shaped bottle with a metal stand, is premium-priced. This proved to be a non-issue as the product sold out just hours after its release. Eventually, even empty Tesla Tequila bottles made their way to platforms like eBay, where they were sold as collectibles by scalpers for about $500-$1,000.

Unfortunately, there are too many rules around liquor distribution, even in the US. However, we will be selling the lightning bottle & shot glasses worldwide.

While addressing a question about the Tesla Tequila’s release in Europe, Elon Musk later remarked that exporting liquor to the region is a tricky affair. The CEO then noted that Tesla would simply be selling Tesla Tequila’s lightning-shaped bottle worldwide. Musk also mentioned that the bottle would be coming with a shot glass. 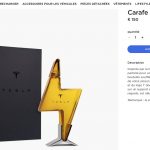 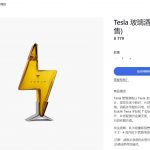 Tesla highlighted the Decanter’s collectible nature in its description for the product.

“Inspired by Tesla tequila, the Tesla Decanter is the perfect touch for your bar. Lightning-shaped, each hand-blown bottle can hold up to 750ml of your favorite alcohol. Featuring both the Tesla emblem and the gold T logo, this exclusive collector’s item, placed on a polished metal stand to be an eye-catcher, is ideal for any occasion,” the company wrote.

The Tesla Decanter is expected to be shipped within 6-8 weeks. Do take note that the Decanter does not seem to include the shot glass that Elon Musk mentioned in November.