MINI has released the first images and videos of their new Aceman concept EV and it marks a significant shift in design while retaining typical “mini-ness.” The vehicle may also be a departure from MINI’s first EV offering in terms of affordability.

As a note, I am a proud MINI owner. I drive a 2011 MINI Countryman S All4 and despite its flaws, I love what I can only describe as its “mini-ness,” and I’m not talking about the vehicle’s relatively small stature. “Mini-ness” is that intangible feeling that makes you think, “Why did they make this [insert part name] this way? And more concerningly, why do I like it?!” I am proud to say that from the initial images of the concept MINI Aceman, mini-ness is alive and well.

If released, the Aceman would be the brand’s second EV offering after the Cooper SE; however, though this hasn’t been confirmed, it would be likely that this would be the brand’s first purpose-built EV (perhaps built off the BMW iX platform) instead of an EV inside of the skeleton of an ICE mini. But this is only the start of the mystery surrounding the vehicle, as MINI was quite tight-lipped in what they shared about the vehicle, essentially only addressing the vehicle’s design and how it was “the beginning of a new MINI design era.”

While this vehicle is only a concept at this point, it does (according to mini) hint at future design. The MINI notably ditches leather and chrome and aims for a simple yet angular design. The exterior of the vehicle is quite exciting with a bright light blue body, a green hood, and red accents. The vehicle looks to be the size of the Countryman, if not a little bigger, but this may be the visual effect of the massive 20-inch wheels. The angularity of the exterior is exemplified in the hexagonal headlights/typical union jack taillights, as well as the hood that has (atypical for MINI) strong creases leading to the back of the vehicle. Nonetheless, the more general curviness of MINI design language remains in a couple of areas; the side and side profile. 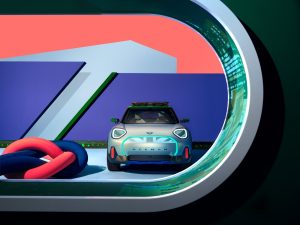 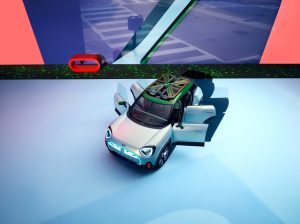 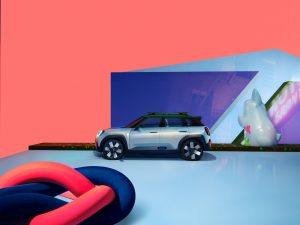 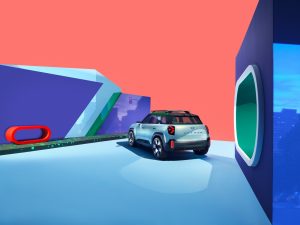 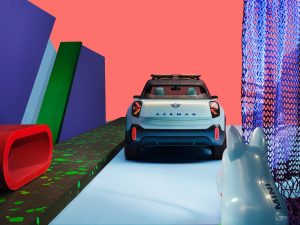 The sharp design language continues to the interior, and this is where pinnacle mini-ness is found. What the brand calls “MINImalism” involves removing nearly everything from the front dash; limited and basic climate controls, no visible window switches, no steering column-mounted tachometer, and nothing but the center screen. And while this may sound similar to Tesla’s interior design language, I would argue that the lack of window switches and the circular center screen help achieve the mini-ness feeling.

The fun coloring also continues within the cabin of the Aceman, but that wasn’t weird enough for MINI designers, they had to throw random geometric shapes on the seats and within the texture of the door panels/interior door handles. Once again; why did they design it this way? and why do I like it?!?! 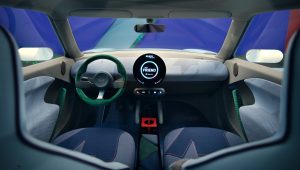 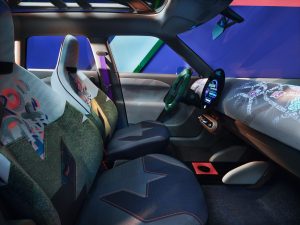 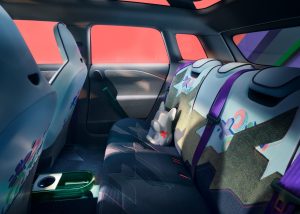 While the strange MINI character is still very alive in the Aceman concept, many are worried that the thing that defined the Cooper SE may be gone from future MINI EVs; affordability. The Cooper SE was one of the cheapest EVs you could buy in the US, and despite its fairly disappointing specs, it grew its own community of people who were simply looking for a shorter-range fun EV. MINI will likely release more details about the vehicle when it is shown in person at the 2022 Gamescon in Cologne later this year, and be sure, the price will be on the tongue of every journalist who is hopeful for an EV future for MINI.

The post The MINI Aceman is both classic MINI and a new approach appeared first on TESLARATI.