Remember when California passed a law that required anyone who wanted to be on the state primary ballot to release their tax returns, a law that obviously targeted Donald Trump? Well, even a People’s Republik Of California court thought it was pretty bad 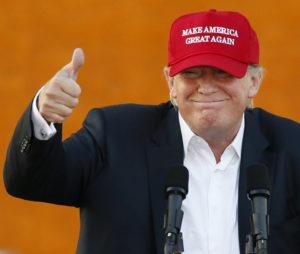 California’s highest state court on Thursday struck down a law that would have required President Trump to hand over his tax returns as a condition to appearing on the state’s ballot for the Republican primary.

In a unanimous ruling, the California Supreme Court held that key portions of the Presidential Tax Transparency and Accountability Act, signed in July, violated the state’s constitution.

The law also requires gubernatorial candidates to disclose their tax returns for ballot access, but the California justices did not address that portion of the law.

The ruling comes ahead of the Nov. 26 deadline by which candidates would have needed to disclose their tax returns in order to appear on the state’s March presidential primary ballot.

The court argued that the law creates an additional requirement that is in conflict with the state constitution’s “specification of an inclusive open presidential primary ballot.”

“The Legislature may well be correct that a presidential candidate’s income tax returns could provide California voters with important information,” the court said in its ruling. “But article II, section 5(c) embeds in the state Constitution the principle that, ultimately, it is the voters who must decide whether the refusal of a ‘recognized candidate throughout the nation or throughout California for the office of President of the United States’ to make such information available to the public will have consequences at the ballot box.”

Remember, previous governor Jerry Brown, as hardcore leftist as the come, refused to sign it because it was un-Constitutional. Tax returns are not something embeded in either California nor U.S. Constitutions as requirements, and the General Assembly can’t just arbitrarily decide to add something in just because they have a derangement syndrome. They just can’t get over Trump winning the 2016 election.


Source: https://www.thepiratescove.us/2019/11/22/california-court-nixes-law-on-tax-returns-for-primaries/
BeforeItsNews Announcements
Step 1: Get the Telegram App & Get Stories Direct to Your Phone or Computer Without Censorship! Get the Telegram App in the App Store or at
https://telegram.org/