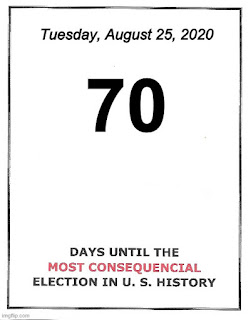 As of today, there are 70 days until the most consequential election in American history. This is what they say about many past elections, but this is really it. For if the Democrats seize power – control of the U.S. House, the U.S. Senate and the Presidency – and doing it by hook or by crook (the justifies the means, you know) America as we know it will be forever changed. America envisioned and created by the Founding Fathers will disappear into the shadows of history.

The ungodly secular-humanists/Marxists slow march through America’s institutions over the last 100 years or so will have reached a crescendo – fulfilling Mr. Obama’s fundamental transformation of America. Never again will the demonic Democratic Party relinquish its grip on political power and control of the masses.
Envision with me what a Socialist Democratic Party, takeover, a bloodless coup, a regime change, would look like. This is one in a series of daily articles leading up to the 2020 General Election scheduled for November 3, 2020.
There was a time in America’s history when unions were important and necessary. But now they are more of a tool of the communist elements including the Democrats to divide and demand more and more. Unions do not belong in government or in education. The teacher unions, for example, use their dues to push and support all kinds of Leftist causes and politicians. It is not so much the union members, but it is the union leadership that have been taken over by persons who are greatly influenced by Marxist philosophy.
Union Membership Has Fallen
American workers now see the unions as part of the problem, not part of the solution. There are several reasons that account for this negative perception. An article provides  “Four Reasons For The Decline In Union Membership.” These are:
1.    Unions often seem irrelevant.
2.    Unions have a poor public image as being bloated, inefficient and often downright corrupt.
3.    Workers are often “out of sync” with union politics.
4.    Most Americans now turn to government, not unions, for basic protections.
Right to Work Laws
The right-to-work law gives workers the choice of whether to join a union or not. States without right-to-work laws require employees to pay union dues and fees as a term for employment.
The Democratic Party platform opposes right-to-work laws. It says,” We will repeal so-called “right to work” laws that undermine worker power and lead to lower wages and less protection for workers across the economy, and ensure those who have been left without wage and hour protections for decades—including domestic workers and farmworkers—have the same rights as other workers…”
The Republican Party platform backs a national so-called “right to work” law, “We support the right of states to enact right to work laws and call for a national law to protect the economic liberty of the modern workforce.”
What Union Dues Do
In a 2013 article, “The Alliance U.S. Labor and Unions and the Democratic Party,” was this observation,  “Ever since industrial unionsworked to reelect President Franklin Roosevelt in 1936, organized labor and the Democratic Party have worked together in U.S. politics. Unions provide votes, money, and volunteer time, and Democrats offer policy benefits when they take office. This partnership is often taken for granted.”
You can see the contrast the Democrats have long worked closely with unions in a “I’ll scratch your back if you scratch mine.”  Unions contribute to the Democratic Party and in turn receive legislative and regulatory support from the Democrats when they are in power.  Unions, like ethnic minorities, are wedded to the Party for what they can get from them and vice versa.
The Ideal: Employee-Management Collaboration
There is no need for unions in a business or organization where the owners and managers treat employees fairly and work jointly in making and ensuring high quality products or services. The best practice is to promote comradery rather than fostering an adversarial relationship, which too often occurs when there is unionization.
The Democratic Party would oppose non-union environments, claiming all owners and managers abuse workers and need the protection of a union and government agencies to back them up.  The Republicans tend to believe labor and management can work together in a trusting collaborative venture to produce a quality product and services which benefits all stakeholders, employees, managers, owners and/or stockholders.
The Downside of Unions
Workers don’t see the downside of unions incessant demands for more wages and benefits until it is too late at times. Unions through strikes have caused manufacturers to seek labor outside of the country because they cannot compete with non-union businesses in manufacturing or providing services.
Unionized schools, manufacturing plants, and government agencies too often are where poor or very marginal workers are retained and protected by the union to the overall detriment of the school or business or organization. For example, once a college professor reaches tenure it is almost impossible to terminate them even if their work is below standard. The same is true with government civil service workers. Unions protect deadbeat employees, which makes almost impossible to get rid of them. There should be no federal unions. There are many people in government that are part of the Deep State that have their own political agenda, which often is at odds with the current administration in power. Even though those employees may be doing things to undermine the current administration little can be done because of civil service protections.
Conclusion
Democratic Party is a party of division and they want to support the “oppressed” worker over the “oppressor” employer.  The Democratic Party likes to keep things stirred up so they can be seen as rescuing the “victim.” Elect a Democrat majority in the U.S. House and Senate and elect Joe Biden/Kamala Harris President and you will see business owners driven into submission or bankruptcy under the guise of “helping” the workers.