Yeah, we’re back to this again

Is the climate crisis creating a mental health crisis? 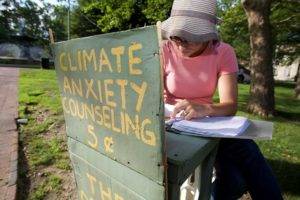 Psychiatrist Dr Lise Van Susteren did not expect to be allowed into a public hearing of the Federal Energy Regulatory Commission (FERC), the agency responsible for regulating interstate energy transmission across the United States.

She had interrupted a FERC meeting before, which typically results in being barred from entering again. But to her surprise, she was allowed into the late February hearing, along with activists from Beyond Extreme Energy, a collective fighting fossil fuel extraction and calling for an overhaul of FERC to enable the quick transition to renewable energy sources. (snip)

The commission was in the middle of considering a proposal for a liquefied natural gas (LNG) terminal and 230-mile (370-km) pipeline in southwest Oregon – until it was interrupted. Following six other activists, Van Susteren stood up to speak about climate change’s far-ranging harm to mental health, including the patients who turn up at her office in Washington, DC, struggling to cope with a quickly warming world.

Van Susteren warned the commissioners that by approving the construction of the sprawling pipeline, they were fuelling this mental health crisis.

It is an issue that she has been studying for more than a decade now. In 2012, she co-authored one of the earliest major reports (PDF) on climate change and mental health, published by the National Wildlife Federation.

“We may not currently be thinking about how heavy the toll on our psyche will be, but, before long, we will know only too well,” she wrote in the report.

It’s a self perpetuating prognostication: grand poobahs in the Cult of Climastrology say we’re utterly doomed, climacolytes buy into this and think they’re doomed, creating mental issues, followed by Warmists proclaiming a slight increase in the global temperature which is absolutely normal for the Holocene saying the climate crisis (scam) is creating mental issues, meaning Other People have to pay taxes and have their freedom, liberty, and choice away by Government.

Van Susteren is far from the only psychiatrist warning of the anxiety and suffering resulting from living on an Earth that is being destroyed. She is a founding member of a nonprofit and all-volunteer network of psychiatrists, known as the Climate Psychiatry Alliance (CPA), which share a common goal, Van Susteren explained, of “pointing out the mental health tragedy that awaits as a result of climate disruption and how to build resilience”.

In just a few years, the handful of psychiatrists ballooned to more than 400 across the US. Every two weeks, they conduct a meeting by phone, which begins with a meditation, prayer, or thought to establish a sense of community and trust.

I wonder how much they get paid by Warmists who need mental counseling? Anyhow, you can read the rest, it is a long, long, hilarious article. Unless you are a Warmist, then you’re going more crazy.