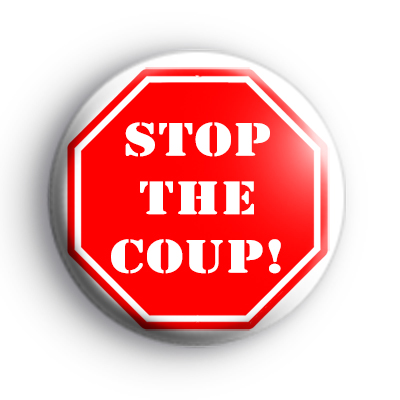 Michael Anton’s new article “The Coming Coup?” went viral almost as soon as we posted it a week ago today. This is not simply because figures like Lara Logan, Mollie Hemingway, Newt Gingrich, Dan Bongino, and the editors of the New York Post took note. It spread because concerned citizens began sharing it throughout the nation. We could tell it was especially effective because so many in the mainstream media maintained studious radio silence.

But hyperventilating ruling-class supporters of the Biden/BLM/Antifa coalition did predictably lash out. The epitome of these reactions is an article in New York magazine’s Intelligencer, by political columnist Ed Kilgore, entitled “Trump Backers Make Case for Stealing Election, Before Biden Gets the Chance.”

The title itself reveals the stubborn simplicity of the Democratic Party’s coup narrative. Their elites have worked themselves and their base into a frothing lather of existential fright. In article after article, liberal intellectuals and activists have been talking for months about how Trump could steal the election or refuse to leave the White House even if he loses. But if the Right dares to point out that Democrats are actually changing the rules of the electoral process and actually speaking publicly about refusing to concede even if they lose, well, this only proves that the Right is going to steal the election and refuse to concede if they lose!

In reality, of course, Anton and others are simply trying to shine a light on what Democrats are now openly declaring in public.

Kilgore frames Anton’s essay as part of an effort among conservatives to spread the craaaazy idea that Democrats’ obsessive focus on mail-in voting is part of a panicky effort to throw the election, not a good-faith scheme to protect people from coronavirus. Let’s leave aside the fact that no less an establishment authority than the Atlantic admits the voting booth is as safe as the grocery store. In fact, says Kilgore, echoing the new establishment narrative, so many legitimate Biden votes may come flooding in by mail after the in-person voting is through that the election will turn around all on its own.

Every major media outlet is now full of supposed expert authorities—even Mark Zuckerberg recently got into the act—telling the American people that the rule changes Democrat apparatchiks are pushing throughout the nation are totally normal. But as elections expert Hans Von Spakovsky pointed out in these pages, “what is clear from all of these lawsuits is that the Democrats and these organizations are trying to change the rules governing the administration of the November election” midstream while Republicans are trying to “preserve the status quo.” (If you want to understand what the Democrats are up to, give Spakovsky’s “Democrats Versus the Vote” a close read.)

Kilgore likes to present himself as a reasonable man. But how are voters supposed to respond when the message from the Democrat Party is “our lawsuits to change the way we’ve always voted in the middle of a tumultuous election season are not part of a partisan cheat. Oh, but one more thing: America needs to understand that while it might very well look like Trump won on election night, due to our new rules votes will be counted for weeks afterward and then our candidate will probably win.”

More significantly, Kilgore sidesteps outrageous statements from leftist activists and Democrat Party royalty indicating they do not plan to concede even if Trump wins. There is no elephant in a corner here. There is a donkey in the middle of the room. So what if Kilgore thinks that ackshually Democrats will concede the election if Trump wins? The problem is that this is not what Democrats are saying.

As Anton and even Kilgore observe, Hillary Clinton and company have already put Biden and Harris on notice—along with the rest of us—that the Democrat ticket must refuse to concede, no matter how lopsided the loss. Is this report from the Daily Beast wrong? “Inside the coalition, there is dispute over whether Biden should even concede if he wins the popular vote but loses the Electoral College…. The Transition Integrity Project noted that there would be immense pressure on Biden to fight it out.” You get that? Even if Trump wins the Electoral College and therefore the presidency, like every other President in American history, the Left is preparing to—to what, exactly?

As TIP co-founder Rosa Brooks wrote in the Washington Post, “with the exception of the ‘big Biden win’ scenario, each of our exercises reached the brink of catastrophe, with massive disinformation campaigns, violence in the streets and a constitutional impasse”—almost as if the party of chaos is the one whose powerful ideologues run the media, the mobs, and the deep state. We’ve already seen what “mostly peaceful” unrest looks like. But the Daily Beast article tells us “the larger game plan is to apply pressure through mass mobilization.” Given the long list the article provides, every left-leaning group in the nation is seemingly coordinating for “mass public unrest.”

But that’s not all. There are also those on the Left who would threaten secession from the United State of America rather than live in an America in which President Trump won reelection. Granted, “there were mixed opinions over what to do.”

“It’s the hardest scenario,” the source said. “It’s 2016. But it’s that plus all Trump has done on voter suppression. So I think there is a question but I think both sides are going to fight this till the very end.” And what, we asked, was the very end? “I don’t know,” the official replied.

The left elite press has sure gotten the message: it’s Trump and his followers who “may” steal the election. Democracy dies in orangeness—even if voters overwhelmingly agree that orange man is, in fact, good.

Ed Kilgore is not worried about any of this. His concern, he says, is that “if conservative opinion leaders convince each other and a big segment of Trump voters that Biden won’t accept a constitutionally legitimate loss, that’s all it may take to rob the 2020 presidential election of legitimacy.” Buddy. Pal. Robbing the presidency of legitimacy is the full-time job of your side since, er, before Trump took office. Do you remember your colleague Jonathan Chait’s deranged essay and its totally not insane conspiracy theory graphic about how the President of the United States was a Russian agent and Putin was his handler?

No matter. Kilgore is deeply concerned that if the Republicans mistakenly believe what the Democrats are saying and doing is real, the Republicans might refuse to concede the election and then “all hell really could break loose.” You mean, like, riots and stuff? Ed, your side is doing that already, and telling us they plan more of it. Lots more.

Still, Kilgore has one good suggestion: “Joe Biden could stop this toxic cycle of conspiracy theories justifying conspiracies by clearly announcing he will accept a clear Trump Electoral College win.” To do so, Ed, he’d have to speak specifically to the people in his own party who are saying they do not want him to do so. These are the “Democrats” you acknowledge in your next sentence—the Democrats for whom accepting the result of a legitimate election “offends” (your word, not ours).

Will Joe Biden and Kamala Harris tell Clinton, Pelosi, and now General Mattis to stop speaking about what sounds an awful lot like orchestrated insurrection? Of course they won’t. They won’t even tell BLM and Antifa to stop burning down American cities.

Rest assured that if the American Right spoke like this, the feds would start investigating. Then again, if the politics was reversed, BLM and Antifa would be considered domestic terror groups.

What is to be done? Republicans need to directly address and denounce the problem, and everyone must press Democratic leaders to do the same.

There is no way out of the coming cataclysm without Republican leaders closing ranks against the coup—and making clear that all Americans who join them will be well-supported in doing so.

As Andy Busch writes in “Sleepwalking into Secession,”

Those who find the Podesta Gambit [in which John Podesta, playing Biden, refused to concede his loss in a TIP war game] troubling need to shine the brightest possible spotlight onto it. To the highest degree possible, Joe Biden must be pressed as soon as possible to disavow it, whether in the form of pushing for the appointment of alternative electors, holding the election hostage to drastic constitutional change, or (above all) using threats of secession as a weapon.

Likewise, the actual governors central to Podesta’s hypothetical strategy (in California, Oregon, Washington, Wisconsin, Michigan, and North Carolina) must be challenged to put on record a pledge to reject that path. Kamala Harris, as a Californian, should face the same questions. These are simple questions. Do you reject threats of secession to get your way electorally? Will you pledge not to appoint electors contrary to the vote of the people of your state?

As Busch warns, “it is before votes are cast, not after, that maximum pressure will be on Biden and his co-partisans to behave in ways that do not repel swing voters. Once the votes are in, the party base will carry the most weight, and the pressure they will exert (as Podesta acknowledged in the simulation) will all be in the direction of driving out Trump by any means necessary.”

Today’s incessant scaremongering that a defeated Trump will barricade himself in the White House—the Nation devoted its latest cover story to this phony fever dream—is a smokescreen from party bigs scrambling to plan for just the opposite. Progressive radicals have spent years assembling a nationwide machine for legitimizing their switch-flip to autocratic rule. The full apparatus of that machinery—the media, the mobs, the deep-staters—is being leveraged to intimidate and disorient the people into accepting a Biden coup. Now is the time for Americans to make it known we won’t let our country be treated this way.

Republican leaders who love America more than they fear the ruling class will do the same.

The Editors of The American Mind.